In addition to its promise of “smaller, more convenient” software updates, Apple is said to be working on a nifty new feature that will allow the system to temporarily remove apps to make room for new updates, and automatically reinstall it after the update is done. 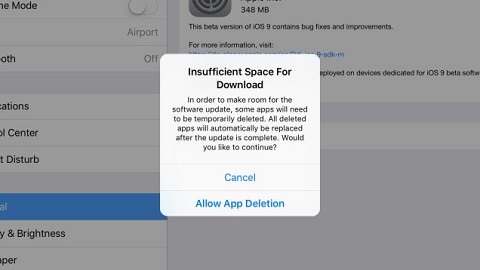 The new feature, which is aptly called App Deletion, was discovered by one of the members of MacRumors forum.

In the instance that the handset does not have enough storage to install the new software update, the system will prompt users about the ‘App Deletion’ feature and takes the guesswork of making room for the new update.

This is well and good, but it’s not clear if the data on the apps that will be temporarily deleted will be restored once the software has ran its course. We’re hoping that it does, because if not, then users are better off doing the process themselves.