4K video recording is slowly becoming a “must have” feature on mobile devices. In fact, most Android flagships are capable of recording at this rate, but the iPhone, even the new iterations, still can’t do 4K out of the box until now. All is not lost though. The Vizzywig 4K will turn your iPhone 5s into a 4K camcorder, 4K editor and 4K distributor. While the iPhone 5s camera app is not capable of 4K video recording, the Vizzywig 4K app has a trick of its own. Instead of actually recording a video at 4K, the app shoot tons of image at 4k resolution and stitches it into a video file at 24fps frame rate and syncs the recorded audio. 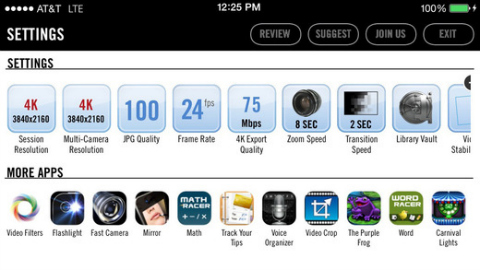 Aside from recording, the app also allows user to edit the 4K video with titles, credits, and background music and upload directly to YouTube in 4K resolution. No need for PC transfer, just tap and wait because the 4K file size is no joke.

The Vizzywig 4K app is available for download in the Apple App Store for a whopping $999.99 (or about Php 44,000) and it only works for the 32GB and 64GB variants of the iPhone 5s running on iOS 7. At that price point, I think it’s safe to say that you’re better off getting a separate device that shoots 4K videos rather than opting for this app.