Entry-level devices are getting better in recent years. A month back, Realme Philippines launched the Realme C2 in the country, a successor to their entry-level hit the Realme C1. Meanwhile, Honor is set to launch one of its latest devices, the Honor 8S, in the Philippines. We put them head to head with each other, to see how they match and differ. Check it out. 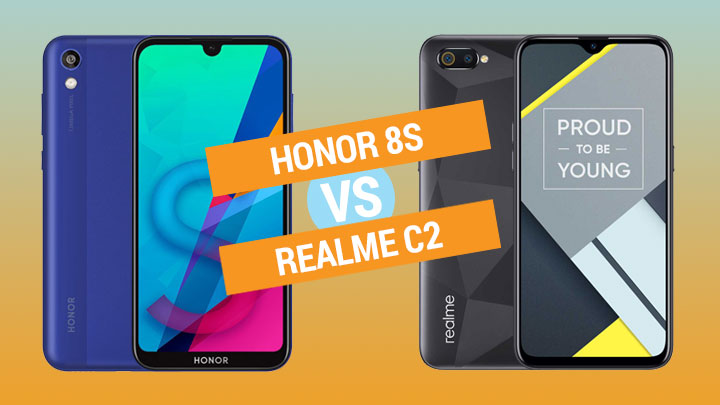 Helio A22 powers up the 8S, while an Helio P22 chipset is equipped on the C2. They’re identical in number and built on the same 12nm manufacturing process; however, the A22 is a quad-core, as opposed to the P22 being an octa-core. The Honor 8S has a lone 2GB RAM offer, while the C2 has two, namely 2GB and 3GB. Both chipsets were meant to run on entry-level devices. As we’ve tested the A22 and P22 with other smartphones, expect the 8S and C2 to be able to multitask but do take caution to not have too many of them operating all at once as it’ll take a toll on each device.

When it comes to storage, the C2 also offers it in two variants to match their RAM, namely 16GB and 32GB. As for the 8S, once again, it’s only available in 32GB. Not to fret though, as both smartphones offer expandable storage via their respective dedicated microSD card slots. Even if the 8S only has one option for RAM and storage, users can expand their space up to 512GB. The C2, on the other hand, can only be expanded up to 256GB.

We’ve yet to see the quality of the 8S’s camera but do take note that it has a single 13MP rear camera, in contrast to the C2’s 13MP + 2MP rear combination. As for selfies, both devices carry a 5MP shooter, situated in the drop notch at the front. We might have to give this round to the C2, thanks to its 2MP depth sensor that supports the main 13MP camera.

Giving life to the 8S is a 3,020mah battery capacity, but the C2’s larger 4,000mAh battery capacity easily stomps on that. Since they’re both entry-level phones, the 8S and C2 don’t have support for wireless charging nor fast charging, but that’s expected already.

The smartphones both carry a micro USB port and have a 3.5mm headphone jack as well. As for operating systems, the Honor 8S runs on EMUI 9, while the Realme C2 has ColorOS 6. The only differ in names and UI, but both of them are based on the latest Android 9.

Here are the prices for each device:

Price-wise, the 8S, and the C2’s 2GB + 16GB variant cost the same; on the other hand, you’d have to shell out another thousand for the C2’s larger 3GB + 64GB variant. If you don’t mind smaller smartphone but with larger storage from the get-go and expand it even further, go for the Honor 8S. If you’d like a larger smartphone with a bigger battery capacity but would have to settle for smaller storage size, go for the Realme C2’s base variant.

Which entry-level smartphone would you choose? Let us know in the comments!