Infinix has just launched its latest smartphone in the Philippines, the Infinix ZERO X Pro. It features an FHD+ AMOLED display, a MediaTek Helio G95 processor, 8GB of RAM, and 128GB of storage. Even so, Xiaomi‘s Redmi Note 10S also sports these mentioned specs. However, the former is priced at PHP 14,990, while the latter retails at only PHP 11,990. So, which of these smartphones should you get? Let’s see in a specs comparison. 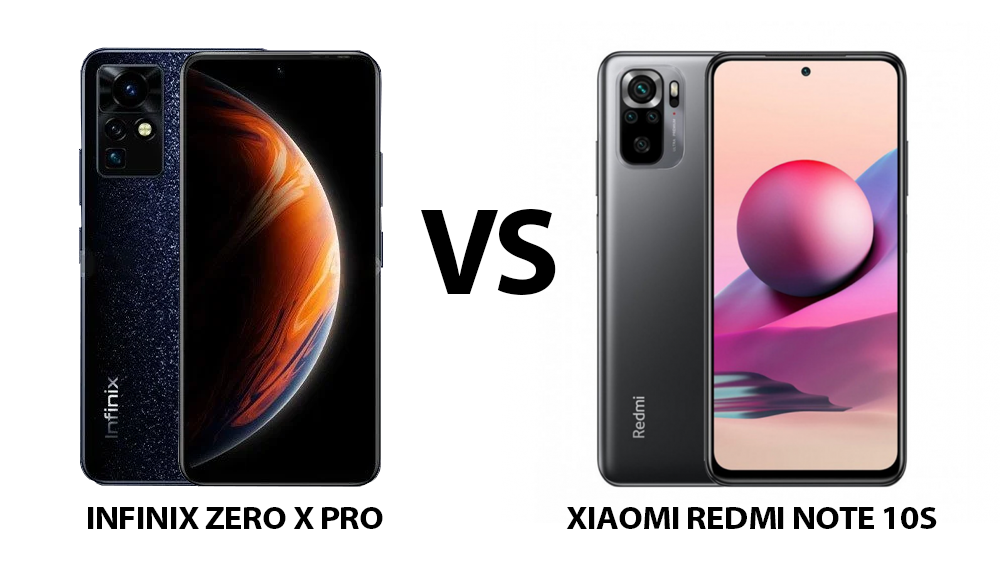 Starting with the display, both smartphones sport above 6-inches screens with FHD+ (1080 x 2400) resolution. However, the Infinix ZERO X Pro has a slightly larger screen size at 6.67-inch compared to the Xiaomi Redmi Note 10S at 6.43-inch.

The Infinix ZERO X Pro, however, advances with its 120Hz refresh rate. With a higher refresh rate, scrolling through the screen is less strenuous on the eyes due to the extra perceived fluidity. Plus, it also features a snappier 240Hz touch sampling rate that could deliver a highly responsive experience, which is essential in gaming.

Meanwhile, in terms of protection, the Xiaomi Redmi Note 10S is equipped with Corning Gorilla Glass 3, which has Native Damage Resistance.

Powering both smartphones are the same MediaTek Helio G95 CPU and ARM Mali-G76 GPU, so we can presume the same level of performance on both. However, we can only determine the extent of their performance and thermals once we have both units for review.

Both smartphones come with 8GB of RAM and 128GB of storage. Both devices also feature a dedicated microSD card slot for easy expansion without the need to sacrifice their dual-SIM capabilities.

The Infinix ZERO X Pro features triple rear cameras consisting of a higher resolution 108MP main shooter. Completing its cameras are the 8MP (ultrawide) and 8MP (periscope telephoto) sensors. On the other hand, the Xiaomi Redmi Note 10S comes with quad rear cameras with 64MP (main), 8MP (ultrawide), 2MP (macro), and 2MP (depth) sensors. It’s worth noting that the Infinix smartphone has a periscope telephoto lens, while the Xiaomi device has macro and depth sensors.

Both smartphones come with 4G LTE, Dual-SIM, SatNavs, and USB Type-C. For audio, both also have a 3.5mm audio jack and dual speakers. However, the Xiaomi Redmi Note 10S comes with a more advanced WiFi 5 and Bluetooth 5.1 compared to the WiFi 4 and Bluetooth 5.0 in the Infinix ZERO X Pro.

Each smartphone has its advantage in terms of battery. The Infinix ZERO X Pro has a 4,500mAh battery, while the Xiaomi Redmi Note 10S has a larger 5,000mAh. The former, however, takes the benefits of a faster charging rate at 45W as the latter supports 33W. It’s up to you whether you prefer the one with more juice or the other that replenishes juice quicker.

People who prefer using their smartphones for multimedia and photography may opt for the Infinix ZERO X Pro since it got a slightly larger screen with a 120Hz refresh rate and 240Hz touch sampling rate, a 108MP main shooter, and a higher resolution front camera for selfies. It’s an advantage as well that it supports 45W fast charging, so you’ll only have to recharge it for a shorter time.

Nonetheless, if the said specs don’t impress you, perhaps the more affordable Xiaomi Redmi Note 10S is for you. Aside from being cheaper, it also has a good set of cameras, advanced connectivity features, IP53 splash-proof protection, and a large battery capacity— which are features that are also great to have.

So, which would you pick? Let us know in the comments below.