Both OnePlus and POCO have recently unveiled their own “flagship killer” smartphones— the POCO F3 GT and OnePlus Nord 2 5G. Both devices are equipped with similar specs, such as the flagship MediaTek Dimensity 1200 SoC, FHD+ AMOLED displays, and triple rear cameras, among others. So let’s see how these two mid-range devices fare against each other through a specs comparison! 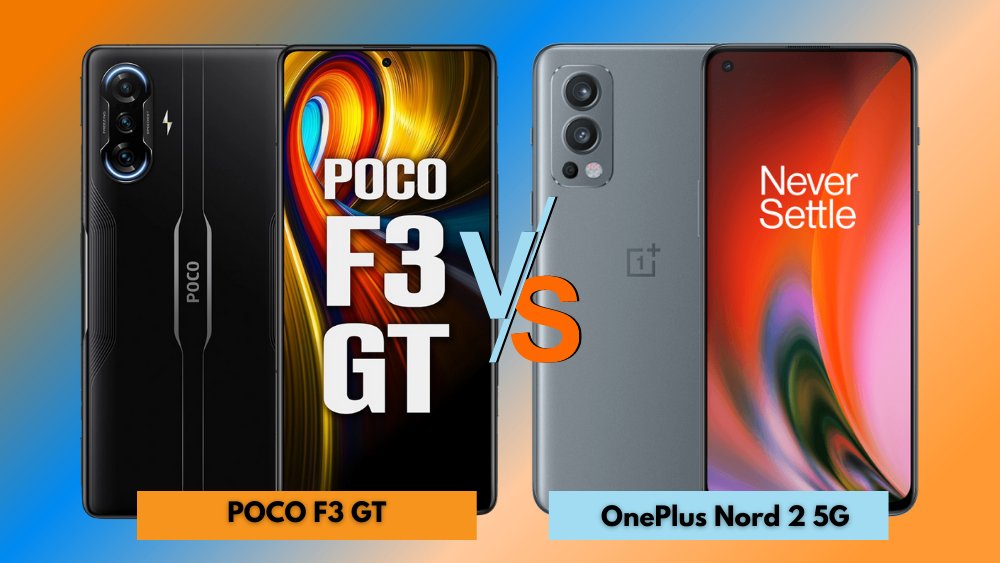 On the flip side, the POCO F3 GT sport a higher refresh rate of 120Hz and a touch sampling rate of 480Hz, providing more advantages in competitive gameplays.

When it comes to protection, both are equipped with Corning Gorilla Glass 5 on front and back. According to Corning, Gorilla Glass 5 survives up to 1.2-meter waist-high drops onto hard, rough surfaces.

Powering both smartphones is MediaTek’s flagship mobile platform— the Dimensity 1200 5G SoC paired with ARM Mali-G77 MC9 GPU. However, note that OnePlus partnered with MediaTek to bring the customized MediaTek Dimensity 1200-AI chipset to the Nord 2 5G. Hence, it claims to sport developed Dimensity 1200 with new AI capabilities, including AI-assisted photography, display enhancements to user experience, better response times in gaming, and the like.

Though, looking at the smartphones’ Kimovil’s AnTuTu scores, the POCO F3 GT slightly outperforms its rival at 677,147, as the OnePlus Nord 2 5G scores 624,572. Although keep in mind that we can only determine the extent of their performance and thermals once we have both units for review.

The POCO F3 GT offers either 6GB or 8GB of RAM. The OnePlus Nord 2 5G, on the other hand, has options of either 8GB or a bigger 12GB of RAM. Both devices support LPDDR4X RAM that brings lower voltage, allows more power-efficient memory, and gives longer battery life to smartphones.

When it comes to storage, both smartphones also give up to 256GB of UFS 3.1 storage. UFS 3.1 offers two times the data rate with faster read and write speeds than the previous version.

However, for selfies, the OnePlus Nord 2 5G is expected to deliver higher quality photos with its 32MP front camera than the 16MP module on the POCO F3 GT. Take note, though, that these numbers don’t always equate to quality. We will provide proof of which camera is better once we test both units for comparison.

As for connectivity, the two are powered with the same specs, such as 5G connectivity, WiFi 802.11 a/b/g/n/ac/ax, Bluetooth 5.2, and dual-SIM. Both smartphones also come with a USB Type-C port.

For security, the POCO F3 GT has a side-mounted fingerprint scanner, while the OnePlus Nord 2 5G supports in-display.

In terms of audio, both smartphones are equipped with dual stereo speakers. The POCO F3 GT’s audio is powered by Dolby Atmos, while the OnePlus Nord 2 5G is tuned by JBL.

Other features of the POCO F3 GT include two magnetic levitation gaming triggers, which could be valuable for gamers.

The POCO F3 GT comes with a 5,065mAh battery with 67W fast charging, while the OnePlus Nord 2 5G has 4,500mAh with 65W fast charging. Thus, both smartphones can recharge fast with their high charging rate. Although the extra 2W isn’t much of a leap, the additional 565mAh is still advantageous for the POCO F3 GT.

Despite having similarities, the POCO F3 GT shines in terms of a better display, gaming features, and a bigger battery— making it more reliable for gamers. On the flip side, with the more compact OnePlus Nord 2 5G, you can only get the perks of a higher RAM option and a better selfie camera.

However, for sure, choosing between the two could be easier once we knew the local price tag of the POCO F3 GT.