The Redmi Note 7 appeared to have shaken up the world of smartphones with its promising specs at an affordable price. Samsung, on the other hand, launched their Galaxy M series of smartphones, beginning with the Samsung Galaxy M20 with large battery capacity. With their price points very close to each other, it’s time to look at both smartphones and see which one brings in the best bang for your buck. Let’s begin! 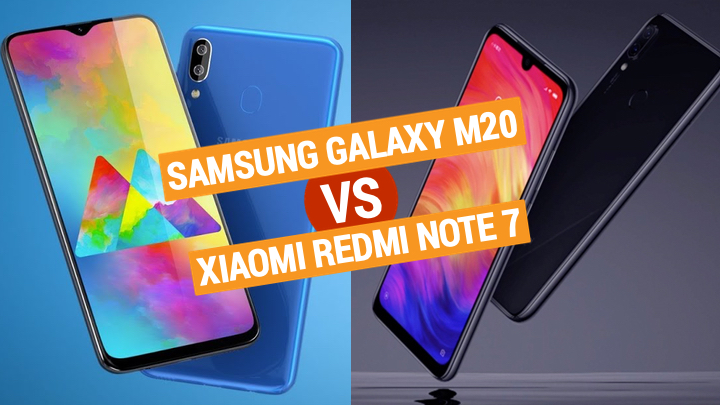 Here are the detailed specs of each smartphone:

Both phones feature a water drop notch that house the front camera. When it comes to the display, both offer large screens measuring past 6 inches which are perfect for viewing videos or streaming your favorite movies. The Redmi Note 7, however, sports Gorilla Glass 5 protection on its screen.

Since the Samsung Exynos 7904 is a relatively new chipset, the data with regards to its performance are still lacking. However, looking at the clock speeds, it is apparent that the Snapdragon 660 performs faster than the former. We’ll know more once we benchmark both devices in the coming days.

Both smartphones offer 32GB and 64GB storage variants. The Galaxy M20 does have the upper hand in this though, as it has a dedicated microSD slot while Redmi Note 7 users would have to use the SIM 2 slot to expand their storage. When it comes to RAM, the Redmi Note 7 has a 6GB RAM option while the Galaxy M20 only has 3GB and 4GB.

Each smartphone possesses dual rear cameras; however, the Redmi Note 7’s 48MP camera powered by the Samsung GM1 sensor is what makes the whole device very appealing above any smartphones in this price range. This has something to do with camera interpolation, though, which you can read more here. Front camera-wise, the M20 only holds an 8MP one while the Note 7 has the advantage at 13MP. Do note that the number of megapixels doesn’t mean that it has better image quality and with that, we can’t say which device has better performance. We do have this quick hands-on review of the Redmi Note 7 in which you can watch here.

For features, USB Type-C fans are in for a treat as both smartphones possess this port. The M20 ups the entertainment value, however, due to its Dolby Atmos audio.

Looking at the battery capacity, the M20 wins as it carries a whopping 5,000mAh compared to the Note 7’s 4,000mAh. They both also have fast charging capabilities although we’re not yet sure which phone charges faster than the other.

To summarize, go for the Redmi Note 7 if you’d like to have better screen protection, a higher maximum RAM capacity, and quality selfies. If you’re into having a larger battery capacity, a separate microSD slot, and upping the entertainment experience, the Galaxy M20 is for you.

Prices for the smartphone and their variants is as follows:

Which one’s the better smartphone for you guys? Sound out in the comments below!