6 Markings on SD Cards and Their Meanings

6 Markings on SD Cards and Their Meanings

MMC or Multimedia Cards come in different shapes and sizes, but the most commonly used one nowadays is the Secure Digital card or SD card for short. Most of these cards have labels or markings on them that would, for the trained eye at least, give a user an overview of an MMC’s feature set by merely glancing on it.

In this post, we’ll give you guys an overview on the six (6) markings that are often printed on an SD card’s label, what these symbols/values stand for and how it can help you in choosing the right SD card for your needs. 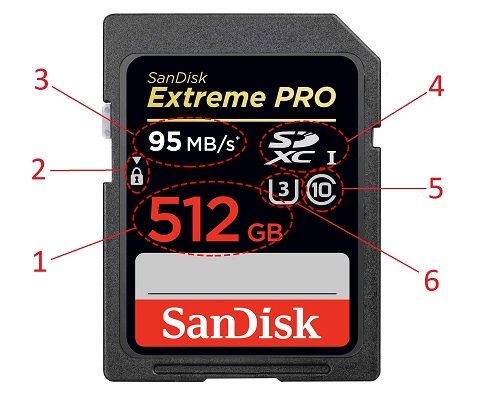 1. Storage Capacity – This is probably the most common marking that you’ll see on an SD card. This indicates the storage spaces that a certain card can hold. However, do note that as with all storage devices, expect that the actual (usable) storage space that you’ll get is lesser than the indicated capacity on the card.

2. Write-protect Logo – Another marking that you’ll usually see on an SD card is the write-protect symbol, often seen on the left side of the card with an accompanying arrow-down label. In order to use the SD card, make sure that the tiny lever is at the top of the symbol which signifies that it’s unlocked and is not write-protected.

3. Read Speed (claimed) – The number on the top left with a corresponding unit (oftentimes in megabytes per seconds) is the maximum read speed that the SD card can spit out based on the manufacturer’s internal testing.

Bear in mind that Read Speed is different from Write Speed. Manufacturers don’t usually indicate the latter as the SD card’s write speed is typically lower in value (meaning slower) compared to read speed. Another thing to remember is that the card maker was able to achieve the card’s indicated read speed in their internal testing by using a supported host device. As such, your mileage will vary depending on what device you’re using.

4. Format – Since the inception of SD cards nearly two decades ago, it has evolved to suit the consumer’s demand for faster storage accessories with larger storage capacity. With every new development, the SD Association creates a new format to standardize the next generation of SD card.

5. Speed Class – Next up, we have the Speed Class marking which gives as a rough idea of the card’s minimum write speed performance and its compatibility with the host device. There are currently four (4) Speed Classes that is defined by the SD Association – Class 2, Class 4, Class 6, and Class 10.

6. UHS Class – Rounding up our list of SD card markings is the Ultra High Speed or UHS Class. UHS is a class that the SD Association launched in 2009 which offers faster transfer rate for SDHC and SDXC and is intended for high resolution video recording. 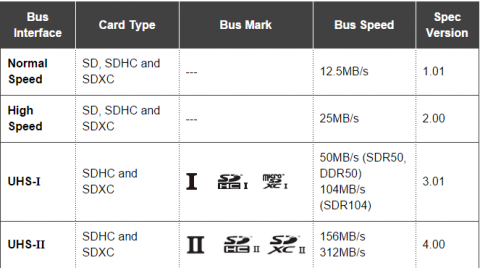