ASUS is one of the game changers when it comes to laptop design. Not only they’ve made their ultrabooks sleeker and more beautiful, but they’ve also made them more powerful and functional. The ZenBook line has always been an example of that and is still evident in the new ZenBook 14 UX435. It packs a NanoEdge screen, a ScreenPad 2.0, and an Intel Core i7-1165G7 CPU with NVIDIA MX450 GPU. Check out our review below. 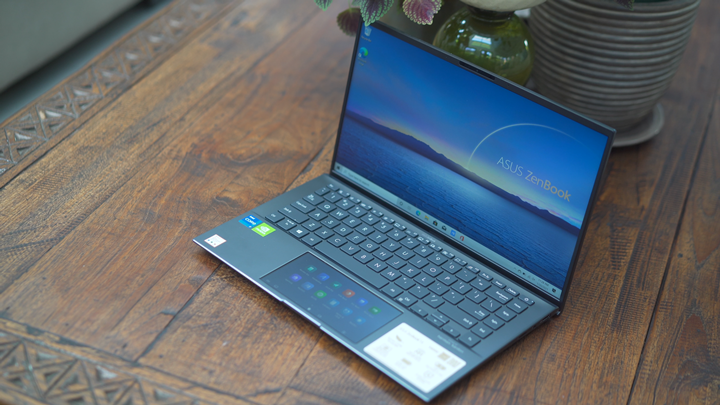 Right from the get-go, it can be surprising to many people that this is a 14-inch laptop. It has quite a small footprint, which is great for portability as well as saving desk space. It looks very premium, given the spun-metal finish on the lid and the chrome ASUS logo. For the main display, we get a 14-inch NanoEdge IPS display with a 1920 x 1080 resolution. We also have very slim bezels on display, a classy-looking chiclet keyboard, and a relatively wide ScreenPad 2.0, which doubles as your trackpad. The glass surface makes tracking feel very smooth, and the addition of a second screen is always welcome for productivity-oriented users. 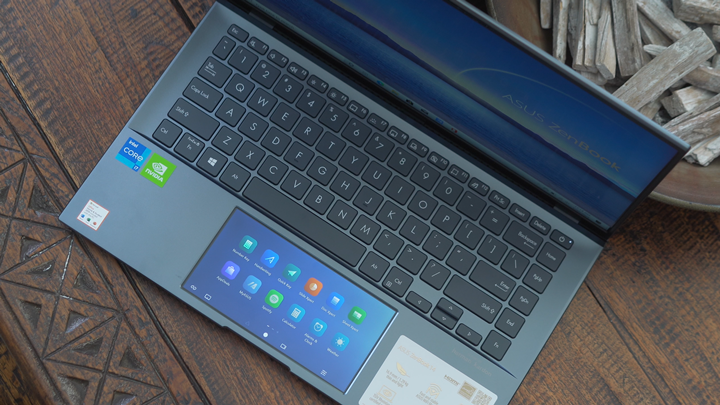 Taking a look at the keyboard, we get a compact TKL layout composed of chiclet-style keys. The keys themselves have a nice feel to them, with a good amount of travel, requiring just the right amount of press. There is a bit of space left on the keyboard’s sides, which makes us wonder why ASUS didn’t add more keys. However, we’re sure they have their reasons for this. 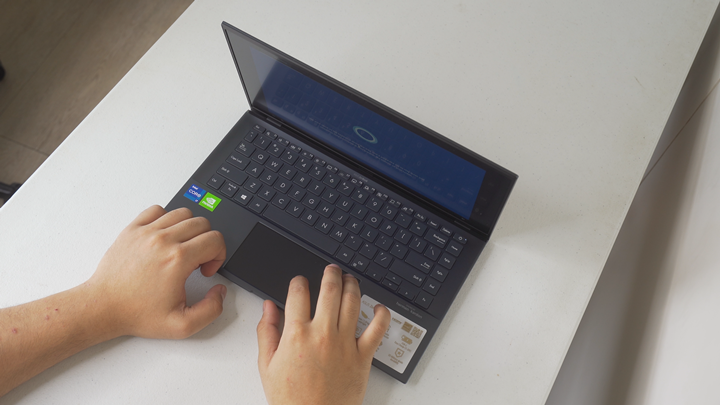 Opening the laptop shows a signature ZenBook feature, the ErgoLift Hinge. It utilizes the bottom portion of the lid panel to prop up the keyboard, resulting in a more ergonomic typing situation. 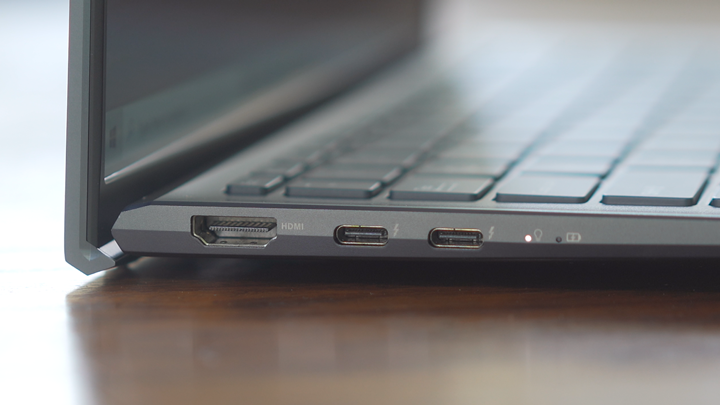 On the left side, we get a full-sized HDMI port and two Thunderbolt 4 ports that also double as charging inputs. We also get a couple of LED indicators for battery life. 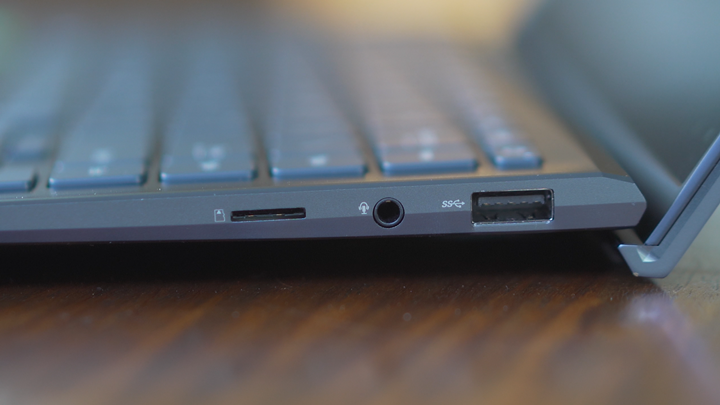 On the right side, one USB 3.2 Type-A, one combo audio jack, and a microSD card reader. Considering that it has two Thunderbolt 4 ports and even an Ethernet dongle included in the box, this is a solid selection of I/O, already allowing for a lot of connectivity potential right out of the box– for most users.

The 14-inch screen might be small for some, but thanks to the NanoEdge screen, it gets an immersive screen-to-body ratio of 92%, showcasing how compact the entire laptop is. It has a really nice display with great viewing angles, 300 nits brightness, and 72% of the NTSC gamut or roughly equivalent to 100% sRGB. Although the maximum resolution is Full HD, it is still sharp and more than enough for productivity tasks and entertainment. What separates the ZenBook 14 from the competition is the ScreenPad 2.0, a secondary 5.65-inch IPS display with a resolution of 2160 x 1080 that also functions as the touchpad. It has a matte finish with decent viewing angles but really sharp. Although not new, this feature has made newer ZenBooks more functional as it allows the user to expand his/her multitasking capabilities. You can drag apps or windows from the main screen to the ScreenPad. You can basically work on something on the main screen and have a YouTube video play on the ScreenPad. Apps like Evernote and Spotify also works well. ASUS also improved its capabilities and added Mode Switch to quickly switch between ScreenPad control and touchpad functions. You can add shortcuts and group multiple apps so that you can launch all of them in one button. You can also make phone calls from it when y our phone is paired to the laptop via Link to MyASUS, make handwritten notes, or turn it into a number key for your spreadsheets.

When it comes to audio quality, the speakers found underneath on the left and right-hand sides produce clear and crisp sound, which is something we’d expect considering that Harman Kardon certified its audio. It’s great for watching movies and doing voice conferences. It’s also okay for casual music listening, but don’t expect powerful bass. You’re still better off using an external Bluetooth speaker, TWS, or wired headphones via the 3.5mm audio port.

The ZenBook 14 runs on Windows 10 Home. There’s not a lot of preinstalled apps, and we only have MyASUS and McAfee LiveSafe. We’re glad to say that it already comes with Office Home & Student 2019 is already included, so you don’t have to purchase a license. The unit we have is packing an Intel Core i7-1165G7 CPU, along with an NVIDIA MX450 GPU, Intel Iris Xe Graphics, 16GB of DDR4 RAM at 4266MHz, and a 1TB NVMe SSD. However, a lower variant is available, which instead features an i5-1135G7 and a 512GB NVMe SSD. Either way, this configuration is actually pretty powerful, especially for a laptop that’s this thin and compact. 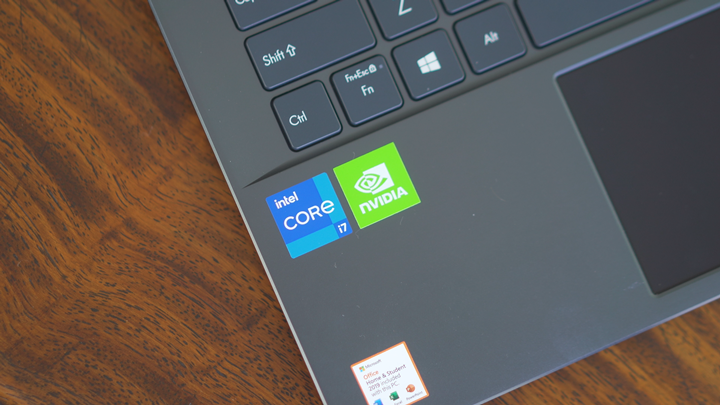 It is a huge enabling factor for productivity tasks and has enough horsepower for creative tasks. Although not recommended for gaming, it’s still capable enough to handle light gaming loads. True enough, we didn’t encounter issues when running multiple applications, including multiple browsers with tons of tabs, Office apps, and photo editing apps. Check out the benchmark scores below: 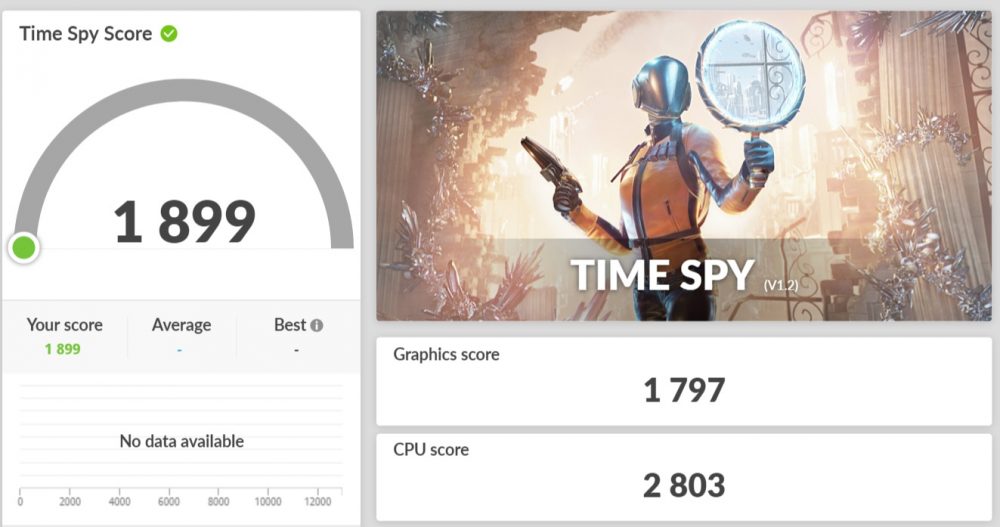 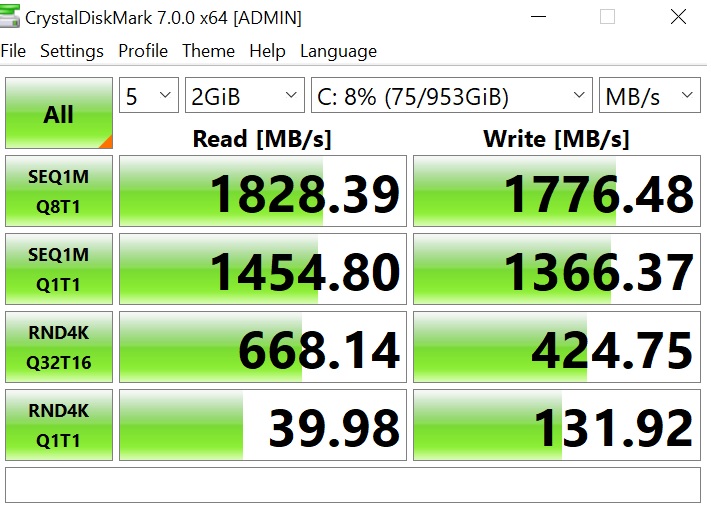 For battery, we get a 63Wh battery, which will enable the device to last for quite a long time, assuming low-power usage. True enough, we’re getting almost 12 hours of battery life, mostly doing productivity tasks like writing articles, heavy browsing, photo editing, and video streaming. The included charger is rated at 65W, so charging only takes a little over an hour.

The ASUS ZenBook 14 UX435 is quite a promising ultrabook that packs a lot of punch for its compact size. It manages to fit in not just a 14-inch main display but also a ScreenPad. Its internals packs quite a punch for performance, and it’s all rounded out by solid battery life. It’s a great ultrabook for users who are looking for something portable yet powerful at the same time. 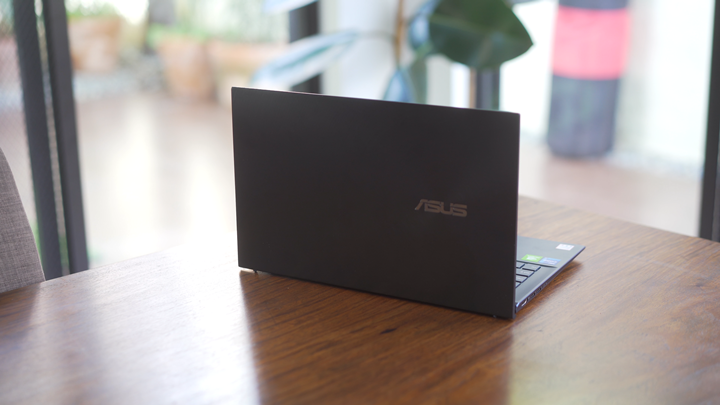