Acer is going all-force with its phone and tablet lineup, and this mid-range beast called Liquid E700 captivated us for a number of reasons. Will the three sim card slots drain the entire phone’s enormous battery capacity? Find out more about our Acer Liquid E700 review after the break. Acer recently went aggressive with its mobile and tablet campaign as it launched a new array of Windows and Android-powered phones and tablets last August. Liquid E700 is one of those presented. This phone is also featured on our list of budget phones with 2GB of RAM.

Inside the box contains the standards: the phone, a microUSB cable, a wall adapter, a pair of in-ear headphones, and lots of papers for manuals, guides, and warranties. Surprisingly, there was also a flip cover included.

Acer’s E700, as described during our first impressions a few weeks ago, is really classy and sophisticated. The design is very well-balanced, and might remind you of HTC’s One M8 because of the front speaker grills. The plastic back plate doesn’t feel that much of a plastic at all, giving the phone a premium feel. The phone’s grip is really nice, and the buttons are placed conveniently for one-hand operation. 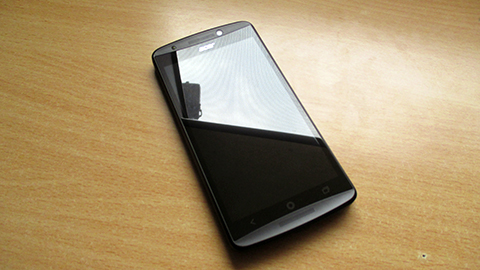 Weighing at 155 grams, a bit of heft can also be felt when holding the device due to its huge battery capacity. This is quite lighter with other phones of the same battery capacity. The front keys don’t illuminate at all, and this can be very challenging for some especially when used at nighttime. Both the front display and the matte back plate in a burgundy red finish (there is also a Titan black color available) is prone to fingerprint greases, and wiping may be necessary to be able to keep it clean. 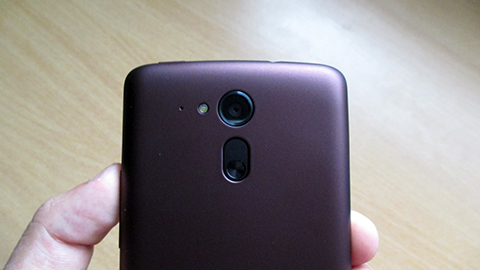 Acer’s back button may remind you of the same ones in LG’s flagship phones. They call this the AcerRapid, a programmable key that can be used as a camera shutter. A short click will introduce you to opening an app (by default, Google Play Music), and a long click will open the camera app. The button can also wake the phone up directly if you’re not using the flip cover, acting as an unlock button. The short click function can be customizable using the settings panel.

Android 4.4.2 KitKat runs the phone, along with an interface Acer calls FloatUI, a vanilla KitKat interface dressed in green Acer colors. It also presents a lockscreen with an animation mimicking a glass filled with liquid content, and tilts according to the angle you put your phone into. 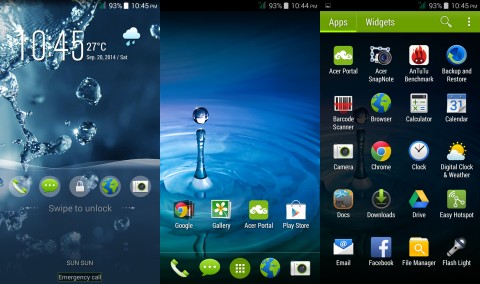 The FloatUI isn’t just a float by the name, as some apps may be used simultaneously with others by means of floating them, creating a somewhat multiasking window experience. Among those apps that can float include calls, browsers, notes, or even the camera. This is pretty useful especially for those who are not keen to open the apps entirely but want to use them discreetly or simultaneously with another app. Apps installed include most of the default ones, as well as a bundle of proprietary apps like the Acer SnapNote, and the Acer BYOC (Build Your Own Cloud) suite, taking your smartphone files to the PC. The Acer BYOC apps also conflict those that are already preinstalled with the Android system, and required a sign-in and an update on first use.

Acer also has an app called the Quick Mode for people who are having difficulties with small icons on the default UI, and can be very beneficial for the elderly and kids who will be using the phone. 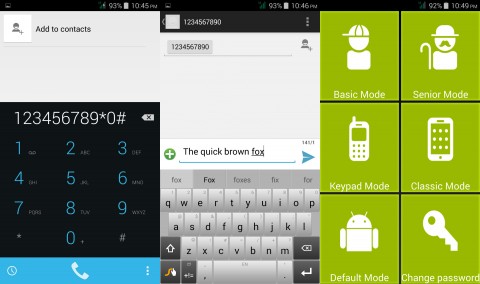 While the 8-megapixel rear snapper takes great pictures in natural light, it focuses slowly and sometimes takes pictures in flushed out colors. Taking pictures on low-light conditions isn’t on par, as it produces a lot of noise. There is also an option for taking HDR photos with just a press. One may notice that the blue hues are comparably faded compared to other colors, and the camera at times puts off its white balance and produces shots with a tint of yellow. The front camera is not on par too, as it captures pictures closer than what the distance is.

Here some photos taken with the Acer Liquid E700:

A great feature of the phone’s camera app is you can take pictures while recording videos, but the problem is that there are no controls for manual video capturing. Once you click on the video icon right next to the shutter during Camera mode, the camera automatically starts recording without you noticing. This might be helpful in immediate times of need, but there are people who might want to start taking videos manually.

Here is a sample video taken with the Acer Liquid E700:

If there is another stunning reason to buy this phone, it would be E700’s display. Measuring five inches, the IPS display boasts a 720p resolution, creating really crisp and detailed views of movies and images in accurate colors when viewed from the device, which makes it perfect for mini-popcorn movie times during breaks, a gaming phone, or a portable video streaming device. The display, though, suffers a lot of glare when used in broad daylight.

The speaker is able to produce sounds of crisp and decent quality. While it may be loud enough to hear in a closed environment such as the office or the comforts of your own bedroom, there are a lot of times that we cannot hear notifications in a noisy environment such as a restaurant or a mall. Also, only the bottom speaker grill is dedicated for playback and notifications. The default ringtones, along with those Acer added, aren’t helping either. We would’ve wished that the top speaker be utilized in a design like this. The phone also has a DTS Studio Sound system that enhances the quality of music being produced whether you are using your earbuds or listen through the phone’s speaker. The system also acts as the phone’s overall sound equalizer. Treble and bass can be manually adjusted to suit one’s taste.

The audio produced by the included in-ear headphones is okay, but we couldn’t identify the left and right sides because there are no indicating marks, leaving us in confusion.

Call quality wasn’t an issue in the E700. We were able to make and receive calls on all three sim cards. Calls received on the earpiece were fairly loud and clear, and can be heard even in noisy environments such as the jeepney or the mall. The microphone records the operator’s voice audibly. We didn’t have any bad experiences with connectivity. Signals captured using 3G, Bluetooth, and Wi-Fi were great. The phone has its own easy hotspot app, making it easier to share your connection to your friends by just opening the app rather than fiddling inside the settings of the device.

Leaving many apps up and running wasn’t a problem with the Liquid E700’s quad-core MediaTek MT6582 and 2GB of ram. We didn’t experience any slowdowns or crashes during our everyday use.

It is also worth noting that Swype is listed as the default keyboard upon our inital use. Texting is easy, but the choice of sim card when sending may leave the user in paranoia as one may accidentally press on the wrong slot. One thing we noticed is that the phone has a habit of recording single touch presses as double taps. We tried replacing it with another keyboard, but the same problem still exists.

TheE700 also supports USB on-the-go, and we were able to transfer files from the phone to a USB OTG flash drive we inserted in the microUSB slot.

We played with 3D games that require intensive hardware such as Eternity Warriors 3 with no hiccups in the gameplay. We also tested the phone using the standard benchmarks available, and here’s what we got:

The 3500 mAH battery life of the E700 is outstanding.  With the first sim’s data connection always turned on, this phone lasts from a day to a day and a half with moderate to heavy use: that includes listening to music, making calls and sending text messages, playing videos and games, and using social media and browser apps — all while the three sim card slots are active.

We took the phone on our standard battery test by playing a looped video at 50% brightness and 0% volume, and the phone lasted for 14 hours. Notably, the phone also recharges moderately quick, from 15 to 100 percent in under 2-3 hours. 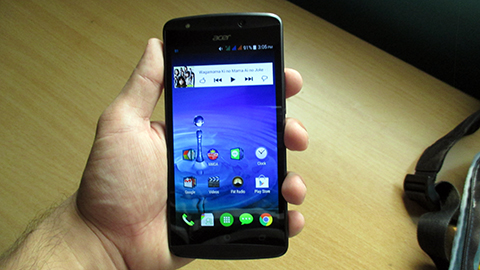 Dual sim handsets are slowly becoming a standard for the masses, but rarely do we see phones released in the country that take on three sim cards in a single phone. At Php 10,990, a sophisticated design combined with great hardware, a huge battery, and a stunning display –not to mention the support for three sim cards — can definitely make this phone stand out to power users in the corporate sector, as these people are mostly the ones who hold up to three phones to be able to accommodate clients each day. This leaves us wondering: Is Acer paving the way for the revival of the local triple sim phone market previously charted by Cherry Mobile and Torque four years ago?

What we liked:
* Really good battery life
* Speed due the phone’s 2GB RAM
* Provision and support for a third sim card slot