In addition to the ZE550ML, we also got an Asus ZenFone 2 (ZE500CL) yesterday to give you guys an early look at the most modest variant of arguably one of the most highly-anticipated smartphone in the local scene today. 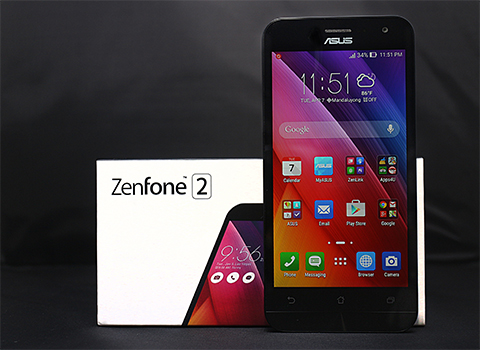 Despite the difference in feature set, the ZE500CL features the same design as the ZE550ML that we featured earlier.

The ZE500CL is, however, shorter than the ZE550ML since it only has a 5-inch display compared to the 5.5-inch panel found on the latter. The smaller screen also favors the ZE500CL in terms of pixel density as it resulted in to a higher pixel-per-inch of 294.

Just below the screen are three capacitive buttons for Back, Home and Menu. It should be a welcome addition to the handset’s feature set, particularly for those who are accustomed to getting their way around on their Android devices using these buttons, but it may look a bit outdated to some especially since some newer Android smartphones gets away with just on-screen buttons thanks to Android Lollipop. Oh and these buttons doesn’t light up, in case you’re wondering. 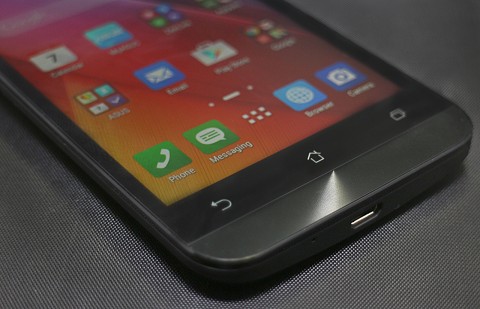 The bezel around the ZE500CL’s screen looks very acceptable even at close quarters, albeit not as spectacular as the ones on other note-worthy handsets. Placed at the top is the smartphone’s earpiece with the company’s logo just below it and are neighbored by the ZE500CL’s 2-megapixel front shooter.

The only other thing in the front panel that’s worth writing home about is the company’s signature embellishment on the chin of the device – a piece of metal with circular pattern that adds a hint of flavor to the handset’s design, especially when a light hits it.

Some of the external components are around the edges of the ZE500CL. These include the Power button and audio jack at the top, as well as the MicroUSB port at the bottom neighbored by microphone pinhole. 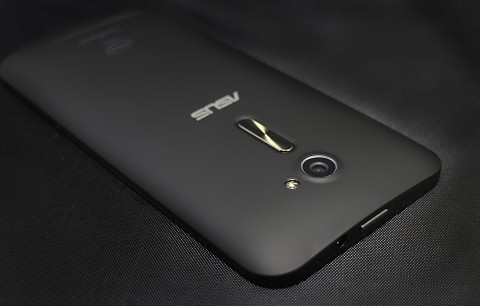 Similar to the ZE550ML, this 5-inch ZenFone 2 sports a curved back panel and a removable back cover with a soft matte finish. Needless to say, this combination, along with the right amount of heft, makes for a very good handling experience as it sits nicely in to the users hand and the soft matte cover provides enough traction to prevent the phone from slipping.

The curved form factor also creates an illusion that the ZE500CL is thinner than what its specs sheet suggests. It also makes it easier to pick up the phone when it’s lying on its back.

Prying the removable back cover open reveals a somewhat similar layout to the ZE550ML, albeit with slight variations. The handset’s 8MP rear camera is smacked right in the middle with the accompanying LED flash unit placed on the right side, instead of a dual-tone flash located at the top on the ZE550ML. Also present here is the ZenFone 2’s iconic volume rocker with the same circular finish as the handset’s chin. 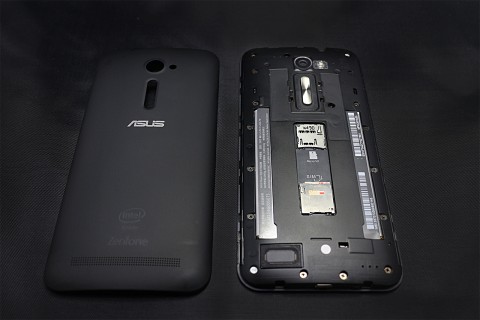 The ZE500CL’s 2500mAh battery is tucked underneath the SIM and MicroSD card slots. Do note that, unlike the ZE550ML, this 5-inch ZenFone 2 only accommodates one MicroSIM card instead of two, though you’ll still get LTE connectivity.

It’s quite disappointing that the ZE500CL didn’t really get a huge shot in the arm in the processing department. If anything, it seems like a repackaged ZenFone 5 with 2GB of RAM and LTE connectivity, as far as it internal setup is concerned.

That notion was validated by the results we got out of the synthetic benchmark tests that we ran on the ZE500CL. This handset only yielded slightly better results on AnTuTu and NenaMark 2, but has seen significant decrease in score on Quadrant Standard. 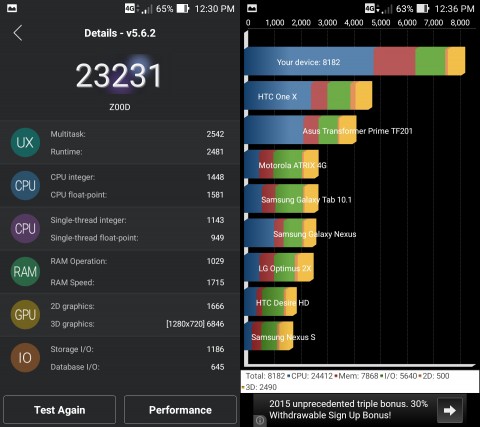 As far as design goes, there’s really not much to say about the Asus ZenFone 2 ZE500CL, or any of the other handsets under the ZenFone 2 lineup for that matter, that hasn’t been said on other ZenFones that we’re featured here in the past. We’ve come to expect well-built devices from ASUS, and we’re glad to report that the Taiwanese firm didn’t disappoint on their new smartphones.

Performance-wise though, we can’t help but feel a bit underwhelmed by the results we got out of the ZE500CL’s outdated Intel Atom processor. We’re just hoping that this variant of ZenFone 2 will be priced somewhere around the ZenFone 5’s SRP (maybe even a little less) so as to not disappoint consumers who are looking for a wallet-friendly ZenFone 2.

The variant of this ZenFone 2 featured here was purchased from E2 Power Gadgets at SM Cyberzone Megamall for Php10,430.

For that 10K, practically I’d rather buy Meizu M1 Note.

like i said before “a remake” and if this is the 199$ variant i’m VERY disappointed.

Recycled junk. Old Babalu design. Lights don’t light up, so what’s the long chin for?
Asus is just too lazy to make improvements based on the old spec. Lllipop allows on-screen buttons now. Why Asus still use the old design with no lights is just plain stupid.