We just came from the local launch of the BlackBerry Z3 where we got the chance to fiddle around with the company’s newest 5-inch smartphone that runs on a Qualcomm Snapdragon processor and the latest BlackBerry 10 OS. Here are our first impressions. 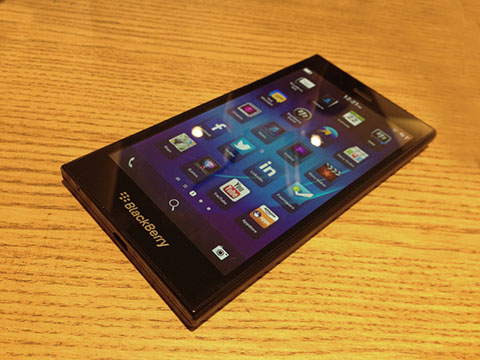 The BlackBerry Z3 flaunts a 5-inch display with a screen resolution of 960 x 540. Its entire face is slapped with one piece of solid glass that stretches from edge to edge. The lower part of the screen only shows the company’s logo – there are only on-screen but no capacitive buttons present on the Z3. 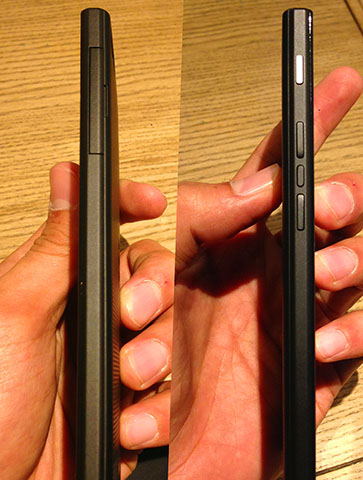 On the right side is where the micro SIM and microSD card are housed under a flap. This is the only thing visible on this side of the device, while the opposite side is populated by the volume controls and the lock screen button. One thing we immediately noticed is the positioning of the lock screen button at the top left of the device that’s hard to reach when we held it using one hand. 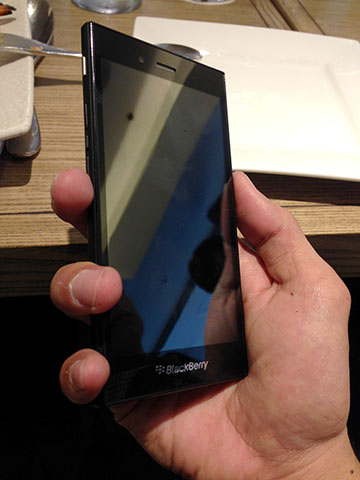 This Is How I Usually Hold A Phone. But Z3’S Awkward Placement Of The Lock Screen Button All The Way Up Top Makes It Hard To Reach. 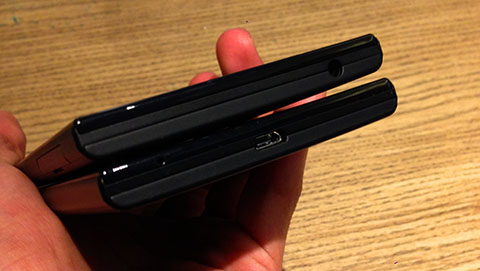 On The Top Of The Device You’ll Find The 3.5Mm Audio Jack Residing On The Left Side, While A Microusb Port Sits Alone At The Bottom.

Z3’s physique doesn’t concentrate much on making the body slim like what other companies are working hard on. Instead, it’s got a bit more thickness to it at 9.3mm but has a solid form factor that veers away from an all-plastic build. The Z3’s back is what makes the device stand out. Apart from the neatly-placed 5MP camera and single LED flash, it has BlackBerry’s signature dot-textured rubber that covers the entire back and adds grip to the device. The added layer of protection looks good too and the rubber material doesn’t feel cheap at all. 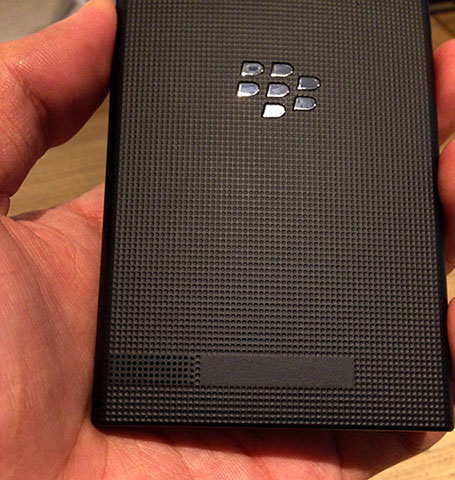 Laser-Drilled Audio Holes For The Speaker Are Located At The Bottom Part Of Its Back.

The BlackBerry Z3 is a midrange device that certainly looks good and feels good to hold. Apart from its lock screen button that’s hard to reach, we have nothing against the overall physique of this phablet. For Php10,990, it’s got a strong, solid build that has balanced weight all around. It’s available starting today at authorized BlackBerry retailers for Php10,990. Hey guys! Just bought a brand new Blackberry Z3 from Fone Style in Glorietta Mall, Makati, Phil. last Thursday-Aug. 14. I’m so loving it! Great Big screen with vivid display. And The battery life is awesome! It lasted 26 hours on moderate use! Amazing! This is something i never experienced with my BBZ10.
Grab yours people! You will surely love it too!
#KeepMoving #TeamBlackberry !
#BlackberryForever !

Where can we buy this?
Can’t find Blackberry stores.
I have a z10 which is a great phone. I want to get this z3 for my spouse.

You don’t need viber or whatsapp. BBM (blackberry messenger) is much better and it is available for both android and ios and soon for windows phone too.

Hey guys! Just bought a brand new Blackberry Z3 from Fone Style in Glorietta Mall, Makati, Phil. last Thursday-Aug. 14. I’m so loving it! Great Big screen with vivid display. And The battery life is awesome! It lasted 26 hours on moderate use! Amazing! This is something i never experienced with my BBZ10.
Grab yours people! You will surely love it too!
#KeepMoving #TeamBlackberry !
#BlackberryForever !

Great! Finally, the long wait is over. Where can i get one? Any suggestion guys?

I am seriously thinking about buying this from Lazada. Price as of this writing is 10,325 php. Check this link: http://www.lazada.com.ph/shop-mobiles/blackberry/. I have found Lazada to be reliable, after having made some test purchases. They will deliver within 5 days if you are in metro manila. You can even pay “cash on delivery.” Then I will use a prepaid internet plan from globe or smart. I am planning to buy this btw for my mom.

Further, I would like to share this with the other readers who are contemplating of buying the Z3. I am already rocking the Z30 and Q10. Wife is using a Z10. The Z3 is a good buy for its mid-level specs and a good alternative to all these androids flooding the market. I prefer Blackberry because of its utility and security and I want to be different. When it is about communication and productivity, no other phone but my Blackberry’s. BB10 OS and BBM are the unique propositions which once experienced, one “will never go back” to Android, IOS or Windows (just a hyperbolic expression by Crackberries, and yet Blackberry users do have that option and flexibility to use Android apps. I have a Note 8 for internet entertainment and the occasional Clash of Clans btw, so I am just as comfortable with Android. In the end, to each his own. Let us all enjoy our gadgets. :)

And by the way, I am eagerly anticipating the arrival of the Passport come September. And really EXCITED about the renewed vigour and vitality of Blackberry under the leadership of John Chen (3 more devices this year after Passport – Classic, Khan, and Manitoba; investments in the Internet of Things, acquisition of Secusmart, the German company which encrypts Angela Merkel’s Blackberry phone vs hacking; and a slew of other positive developments globally; sound financial fundamentals as of last earnings call; stocks on the upswing compared to months ago, etc etc. ) . Blackberry is back and I hope Blackberry will be back, as in BACK, in the Philippines . (No bashing please….)

Can’t wait for this to be offered by the local telcos. My contract expired last March pa, looking forward to this as my retention phone!

Just a quick question guys, Z3 or Xiaomi 4 (in case the latter will be sold soon here in Pinas). I am torn between the two. Thanks in advance for the inputs! :-)

z3 on the other hand has 8GB internal memory but expandable for 32GB SD card that is better than a 16GB mi4 (my mi3 has 13GB if you add system apps, might be the same story to mi4). Might not be so accurate but z3 has better battery due to lower demands of lower chip, screen resolution and much optimised OS.

Though Mi4 is way better in every aspect but it really depends on your preference, fans of BB should probably pick z3 over mi4 just to support their beloved brand(I can’t honestly hate BB as well, It’s a good OS for selected consumer).

pick BB Z3 based on ur preference, it shouldn’t be matched by those bunch of android phone around.

The 14k Battle!
mi4 vs OnePlus One

thanks guys for the info. really appreciate it. will have a lot of things to think about tonight. :-)

@boybato: no problem dude, It’s about time to forgot our conflict about the past… bato-bato pic era is over. XD

nice phone indeed, i hope globe will bundle or atleast cater this phone, come on globe my contract will expire next month, i dont want your offerings such as cheap china phones, i want this kind of phones,

This was brought up during the launch. BlackBerry is in the process of finalizing partnership with two telecoms. Expect announcement soon.

Where can i buy this? San ang “authorized retailers”? Sang mall kaya meron into?

Just purchased a new Q10 as a second phone with my primary Note 3. Missed my BB9900 which I used for a year last year as a second phone. The Z3 pricing is attractive, but for that price, the Z10 with its better screen and specs is a better value. For a qwerty phone, nothing beats the Q10 – there’s no other choice in the market, anyway. Too bad it will be an uphill climb for BlackBerry in the RP market after they abandone it last year.

If you like your Q10 for its keyboard, you may want to check out the Blackberry Passport, which will come out later this year. I would ditch my Q5 and Z10 for this BAD ASS Phone.
The Z3 appears to be well built, has bigger screen, and longer battery life compared to Z10.
Hopefully Blackberry can sell enough BB10 handsets to keep their presence in RP. More competition is always better for the consumers.

Agree! Can’t wait for the BB Passport to come to our shores. More competition, the better for us-consumers!

Maganda ang design, classy. If they could just bump the screen resolution and lower the price. Z10 and Q10 are now on the same price range as this mid-range smartphone. Over-all ok, kudos BB. :)