Everything you need to know about the “Curse of Naxxramas”

Everything you need to know about the “Curse of Naxxramas”

Right around 2AM Manila time, Blizzard has finally released the highly-anticipated expansion of Hearthstone: Heroes of Warcraft dubbed as “Curse of Naxxramas”. Head past the break to see all the stuff you need to know to get you up and running for the new expansion. 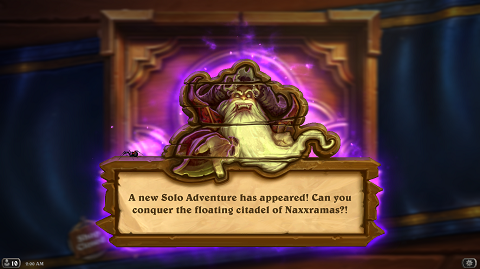 The Curse of Naxxramas is a “Solo Adventure” mode that comes just four months after the Hearthstone exited Beta and three months after Blizzard made the game available for iPad users.

The latest expansion composes of five (5) wings which will be released a wing at time over the course of five (5) weeks starting with the first wing called Arachnid Quarter. Each wing will have bosses which wield different set of cards and hero abilities. Players would have to defeat a boss in order to move on to the next boss and/or wing.

Here’s the list that players will encounter on Naxxramas, along with the corresponding release dates and reward cards that will be handed out after defeating them: 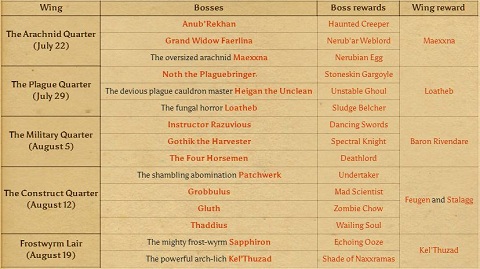 After finishing a wing, players will be rewarded with a set of cards, including one (1) Legendary card. They can then move on to the next wing, provided that it is already available. Mind you, these reward cards are Soulbound, meaning players cannot disenchant and/or craft the basic version of these cards. They can, however, craft a Golden version of the card, but only after unlocking it by defeating the boss on a certain quarter or wing.

The Curse of Naxxramas features 30 new cards including 21 neutral cards and 9 class-specific minions that complement each of the nine classes currently on the game. Of the 30 new cards, however, only 29 are collectible because Thaddius is only a token, 11/11 token to be precise, that can only be generated when Stalagg and Feugen dies.

Here’s the breakdown of the new Naxx cards sorted depending on their rarities (arranged alphabetically):

After breezing through all the bosses on a particular wing, the Class Challenge and Heroic Mode will be unlocked. These additional game modes should keep players busy as Blizzard preps for the next wing/s, and here’s why. 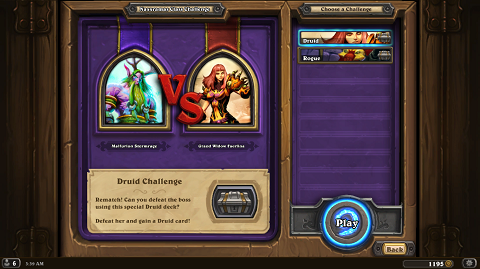 In Class Challenge, players will have to defeat two bosses using two specific classes. However, instead of using their own pre-constructed decks, users will have to win over the enemy using a pre-selected deck by Blizzard.

It’s rather tricky since you don’t know which cards you have and how many of them are on your deck. In this game mode, you really have to be friends with RNGesus and pray that you have better draw than your opponent. 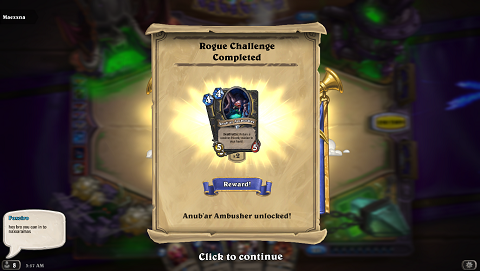 Defeating a boss on Class Challenge will reward players with a pair of class-specific cards. In the case of the Arachnid Quarter it’s two Poison Seeds when you defeat Grand Widow Faerlina using Druid and two Anub’ar Ambusher when you beat Maexxna using a Rogue.

Next up we have the Heroic Mode. It’s basically similar to the Normal mode wherein players get choose what class they want to play and what deck. However, the opponents are more difficult to defeat compared to Normal mode and they have 45HP instead of the usual 30, giving them an upper hand right on the get go. 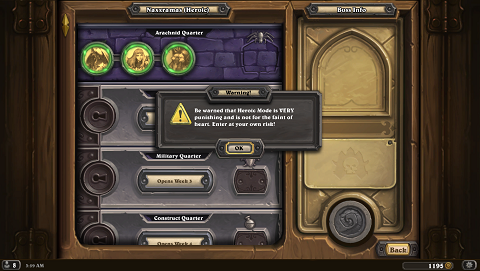 As of the time of writing, we haven’t defeated any of the three bosses on Heroic Mode. This can only mean two things; either we really suck at this game or the difficulty level is really high. Either way, Heroic mode will definitely flex a player’s IQ and will test their deck building skills.

And because we have not defeated any of the bosses, we still don’t know if there’s any reward for beating them on Heroic mode. We’ll update you guys regarding that if and when we’ve triumphed over these OP bosses.

One of the things we love about Hearthstone is that it’s free-to-play, but keep in mind that Blizzard is running a business, not a charity, not to mention they have employees under their pay roll that relies on whatever amount the game can generate through packs purchases and Arena entrances.

Having said that, Blizzard will have to generate additional income to keep the game running, and that’s when the Curse of Naxxramas comes in to play. 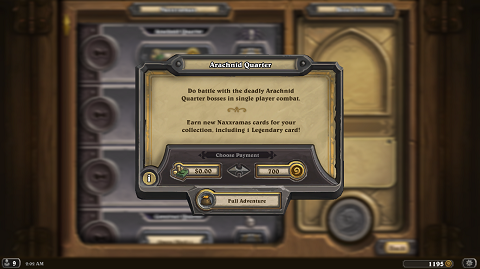 During Naxx’s launch party, which by the way lasts for a month, players can gain access to the first wing (Arachnid Quarter) free of charge. After that, players will either have to pay 700 Gold (in-game currency) or USD6.99 to unlock it.

The same price applies to the succeeding wings/quarters that will be released weekly. Players can opt to unlock the wings one by one by paying the aforementioned fees or they can choose to pay the bundle price which will save them a couple of bucks.

Here’s the breakdown of the Curse of Naxxramas fees:

Alright we think that’s a wrap for our Curse of Naxxramas guide. Feel free to share your thoughts about the new expansion or the Hearthstone in general in the comments field below.