Just a couple of days ago, Cherry Mobile has announced the new addition to the Flare family – the CM Flare HD. By merely looking at its name, we already have a hint on what we can expect from the newcomer, at least from the display standpoint. 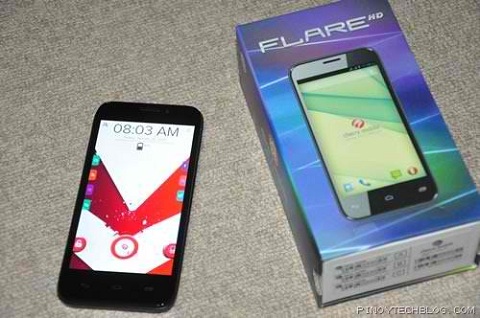 Most of the hardware components are identical to the other Flares (Flare 2.0, Flare 2X and Flare S) we’ve seen in recent times. This includes a quad-core A7 processor, 1GB RAM and a modest 4GB internal storage.

The kicker here is the Flare HD’s bigger and significantly better display complete with IPS technology. In addition, it boasts a 12MP camera on the rear end, coupled with 5MP on the front.

On the downside, however, the “HD ng Bayan” comes with an uninspiring 1,800mAh battery pack. We’re still uncertain battery’s mileage, but judging by the smartphone’s HD display, we’re assuming that it’s not going to last very long.

The Cherry Mobile Flare HD is slated to arrive next year. The local company was mum about the pricing but claims that the new handset will be cheaper than the CM Apollo, but will be slightly more expensive than the Flare 2X.