In October last year, Cherry Mobile released its lineup of Flare S6 smartphones, and among those is the beefy Flare S6 Plus. One of the highlights of the phone is its quad camera setup. But that aside, does the Flare S6 Plus fare well in other aspects? Find out in our review. But before that, you can watch our unboxing video of it below.

At first glance, you’ll notice that the Flare S6 Plus is the premium one compared to the Flare S6 and the Flare S6 Selfie. It dons a metal unibody which makes it quite hefty but it feels solid and comfortable to hold. It’s 8.6mm thick but still feels relatively slim. It has a 5.7-inch HD IPS ‘TrueView’ display and mounted above it is a 2.5D glass. 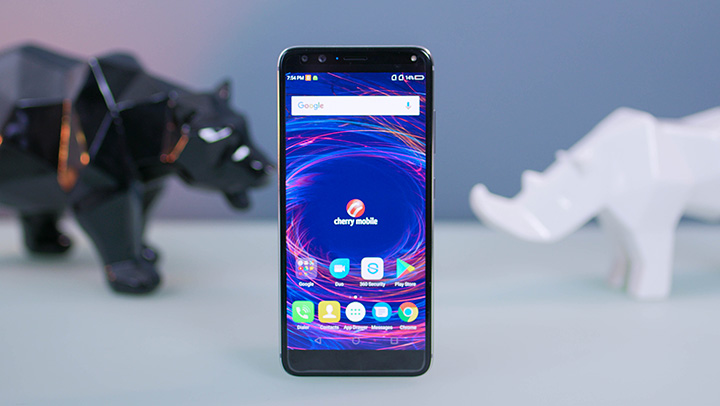 Placed above it is the dual 16MP + 5MP front cameras, LED flash, and earpiece. Cherry Mobile ditch the physical capacitive keys and usedon-screen capacitive keys instead. 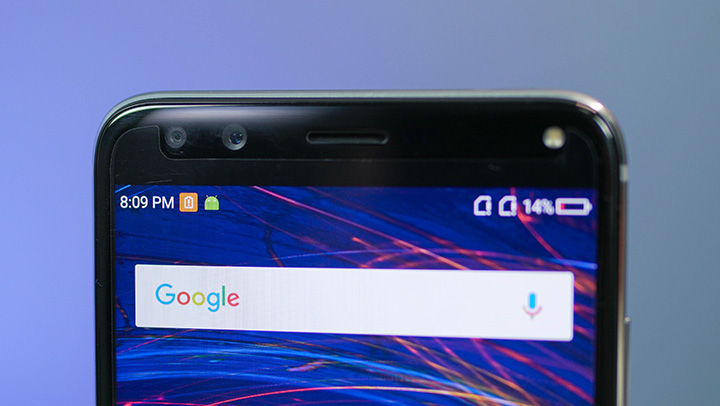 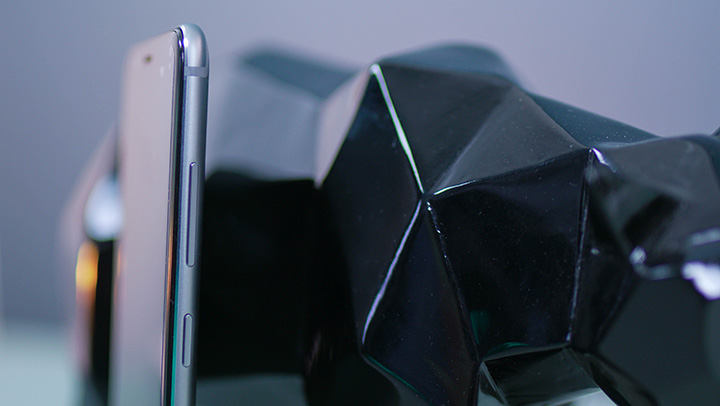 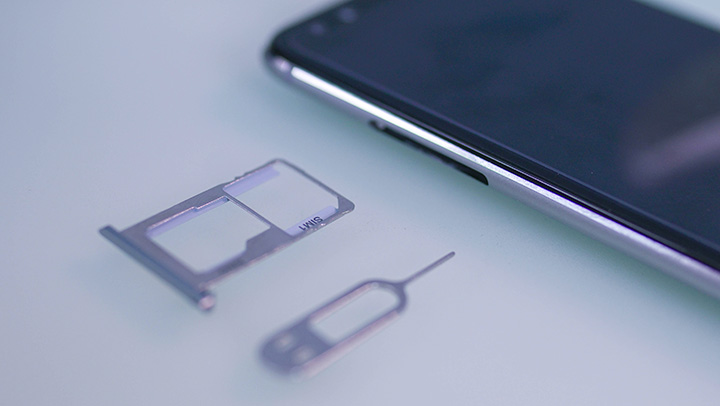 Up top, we have the lone 3.5mm audio port. Underneath the phone, we will find the main microphone, loudspeaker, and the USB-C port. 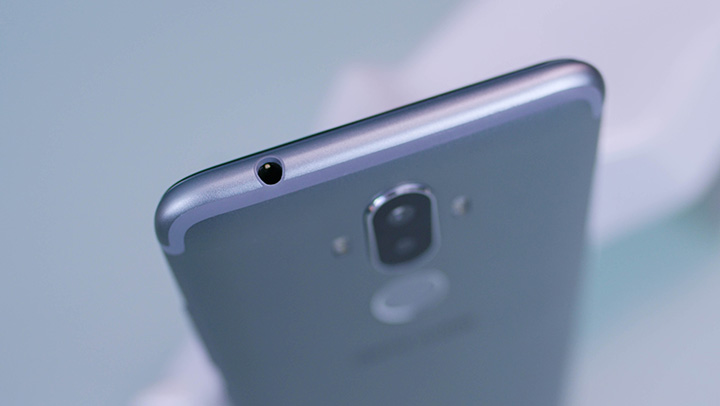 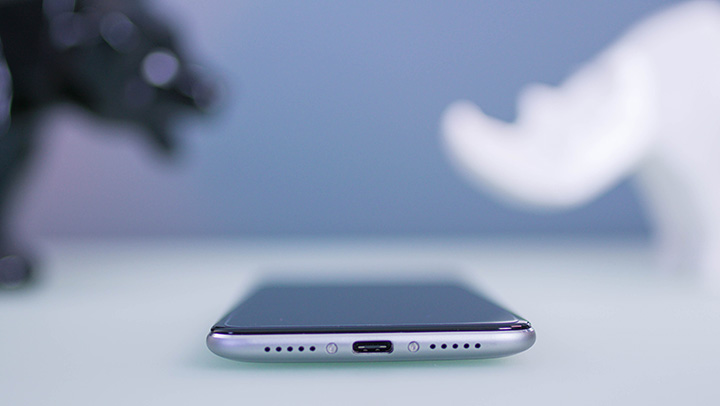 Flipping the phone on its back, you will see the protruding dual rear camera setup consisting of 16MP + 5MP sensors, dual-LED flash, the circular fingerprint scanner, and a couple of antenna bands at the top and bottom. 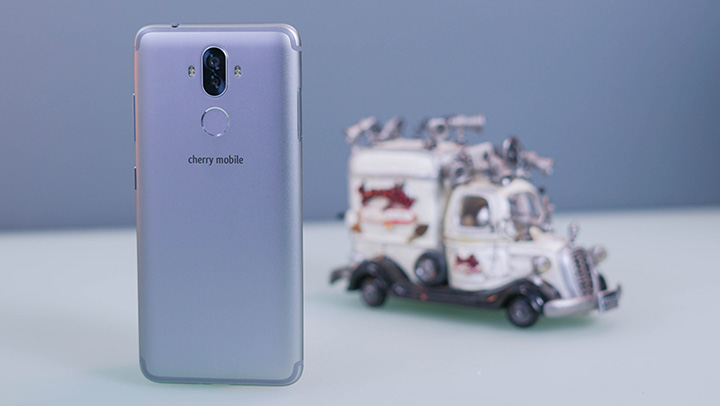 The Flare S6 Plus sports a 5.7-inch HD IPS display at 1440 x 720 resolution which equates to 282ppi. Cherry Mobile calls its 18:9 screen ratio the ‘TrueView’ display. The screen resolution is not that high, though, but the quality is decent with accurate colors and wide viewing angles. It’s also bright enough to be used outdoors and its dimness is just about right when viewing contents in the dark. Under the display settings menu, you will find MiraVision. This feature will allow you to select picture mode from Standard, Vivid, and User Mode, depending on how you want your screen to look like. There’s also Dynamic Contrast for video enhancement and BluLight Defender for eye care. 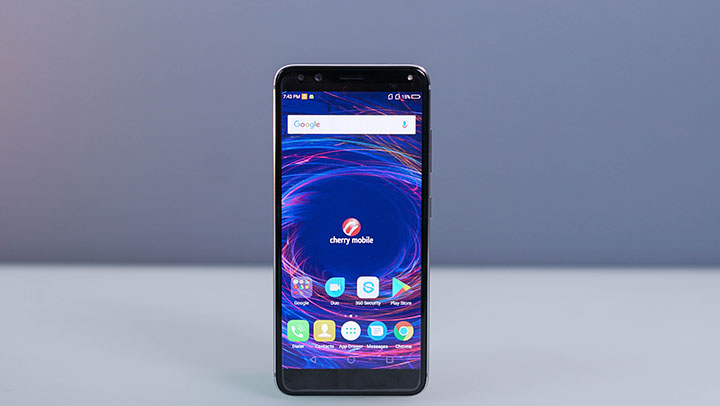 The Flare S6 Plus is equipped with dual 16MP + 5MP Samsung S5K3P3 rear cameras with dual-LED flash and dual 16MP + 5MP Samsung S5K3P3 front cameras with LED flash. The dual rear cameras feature a number of modes to choose from including Pro, Beauty, Panorama, FaceCute (stickers), and Bokeh. Its Bokeh feature can be adjusted from f/1 to f/16. It also has a set of 9 filters. You can also add Watermarks (date and time) to your photos if you want to. 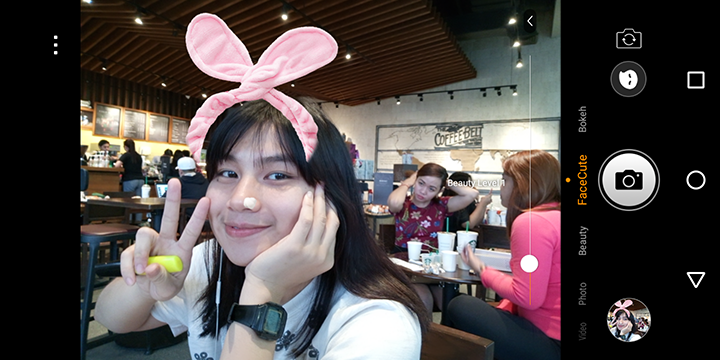 As for its front cam, it has Beauty mode which blurs out blemishes, makes the eyes pop, and to add more sprinkles to the cupcake, it also detects your gender and age (note: it’s not always accurate, though. Don’t be fooled or offended). There’s FaceCute and Portrait mode, which acts as bokeh or artificial blur to your selfies. Inside the Portrait mode, there’s also a Beauty mode that you can freely adjust depending on your preference. 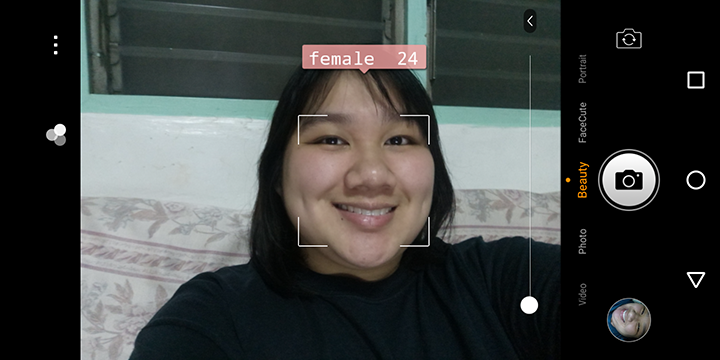 Images produced on the rear cameras turned out actually pretty good and sharp. However, we noticed the cameras’ auto-exposure had a hard time adjusting, which is why some photos tend to look overexposed and the lights surrounding the subject tend to look pretty harsh. Its Bokeh feature could be improved, as the subject tends to get eaten up by the artificial blur. The 5MP camera, which acts like the ‘zoom’ lens, is quite disappointing (especially in low-light) as the resulting photos looked very grainy. On the good side, though, using the HDR mode is a bingo. Here are sample photos.

On the other hand, its front cameras are a different story. We were impressed by how crisp and clear the selfies turned out. If you’re a fan of taking selfies, you’re probably going to enjoy this one. We would also like to note that the Portrait mode on the front cameras perform a little bit better than the rear cameras’ Bokeh feature. However, noise is evident when shooting selfies in low-light. 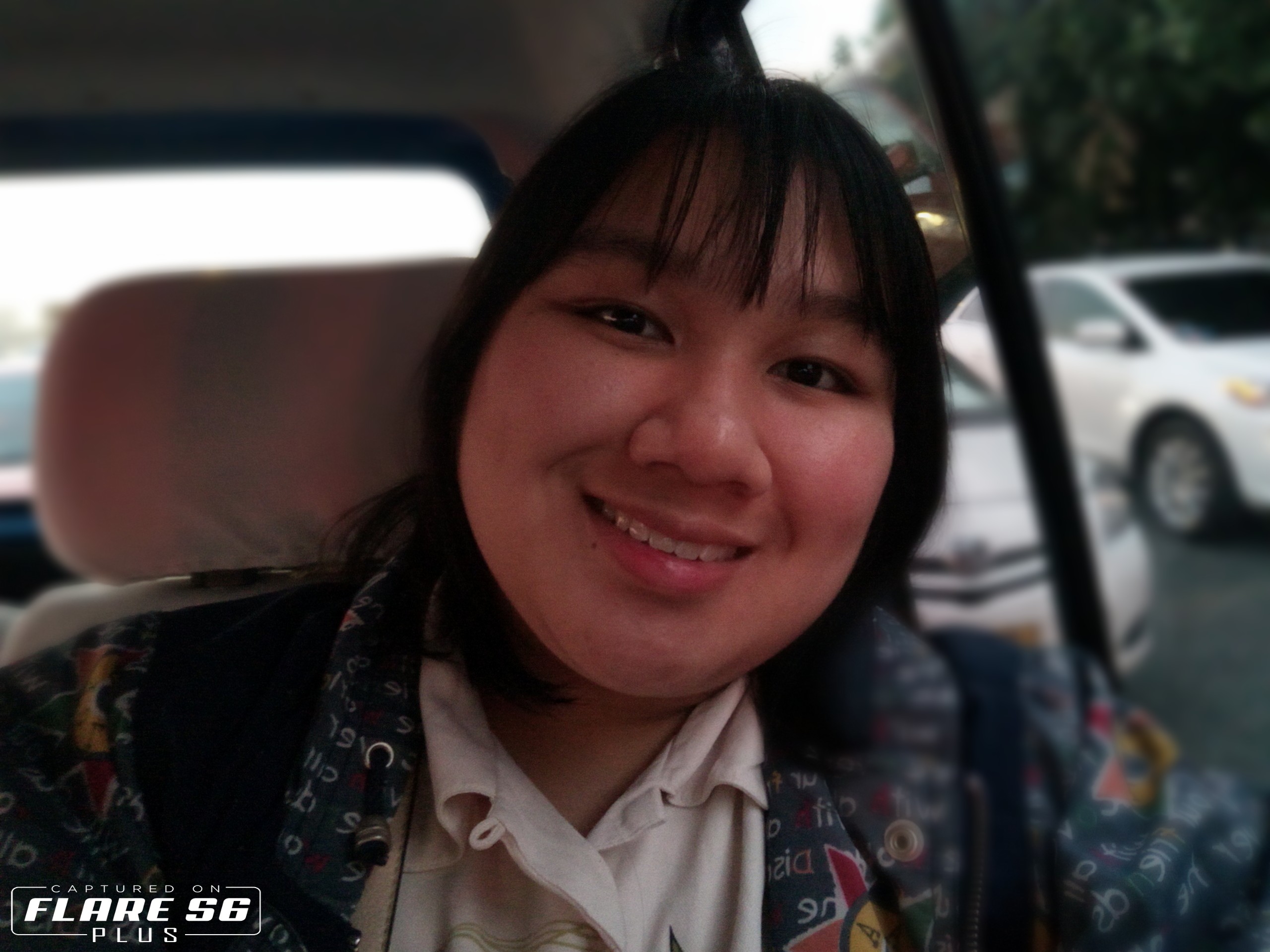 Video-wise, the Flare S6 Plus can shoot up to 1080p at 30 frames per second (fps). It offers three modes such as Slo-Mo, Timelapse, and Beauty Video. For a phone at this price point, we can say that the quality is pretty good and sharp. There’s no support for EIS or OIS, though, so expect that some clips will come off shaky.

The Flare S6 Plus runs on Android 7.0 Nougat skinned with Cherry Mobile’s very own UI, the Cherry OS. Its UI is intuitive and its got an app drawer (if you’re a fan of that), though we think it’s unnecessary since the home screen already also has all the apps on it. Swiping left of the home screen brings you to the search window, wherein you can search for apps you want to open, as well as the latest news. 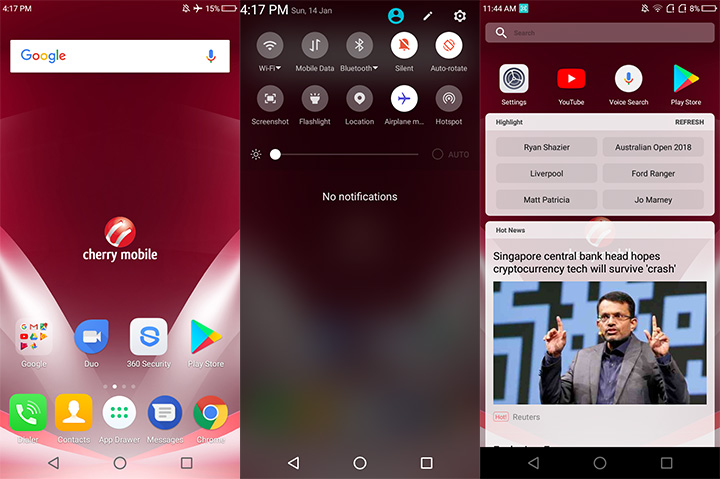 Pre-installed Google apps such as Android Messages, Chrome, Gmail, Photos, Drive, and Maps are present. Cherry Mobile included its native apps such as the Cherry Fun Club, Cherry Prepaid, CPlay, MovieClub+, eWarranty, Chumslive PRO, and Info Center. There are extra apps placed in a Black-Tech folder such as App Cleanup, Permissions, Privacy System, Health Guard, and Avatar Master. A dedicated Wallpaper app is also present, just tap the icon and it changes your phone’s wallpaper. To summarize, this phone contains a bevvy of bloatware. 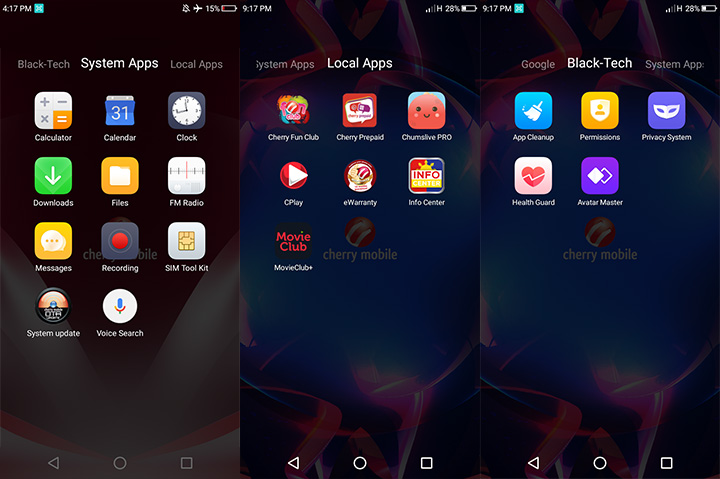 Out of the 64GB, only 513MB were consumed (which is quite surprising considering the amount of bloatware) so you have a plentiful 63.49GB left to use. If that isn’t enough, you can always use a microSD card.

Powering the Flare S6 Plus is a MediaTek 6750T octa-core CPU clocked at 1.5GHz, Mali T860 GPU, 4GB RAM, and 64GB internal storage. Playing graphically-intensive games like Asphalt 8, and Into the Dead 2 have been okay although we noticed some frame drops and a bit of stuttering during our time with it. Multitasking is a breeze and navigating the phone has been smooth. The phone also freezes apps on background when not in used for a while.

We’d like to note that the phone warms up pretty quickly on the back after using it for quite a while. Its fingerprint scanner, on the other hand, is not too snappy but it would suffice. What we liked about it is that when someone tries to invade your phone (e.g. trying to guess your security pattern), the phone discretely takes a picture of the invader. You’ll see who the person is once you unlock your phone. 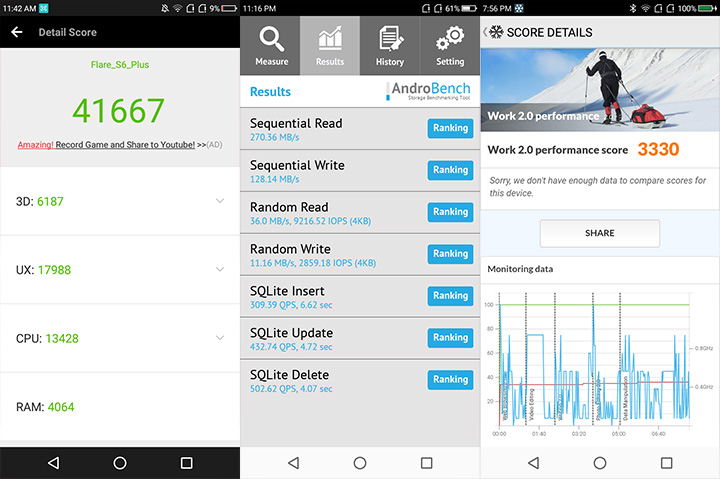 Check out the phone’s benchmark scores below: 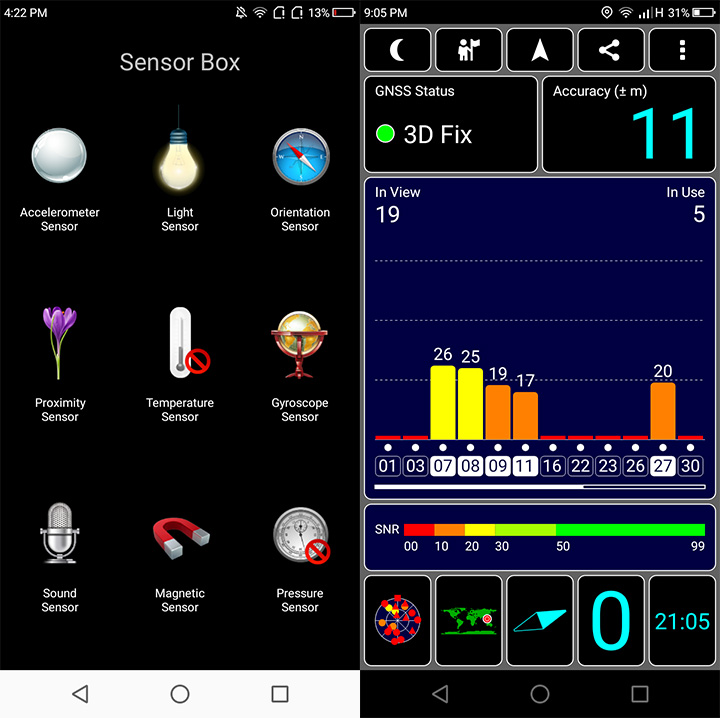 The Flare S6 Plus has all the connectivity functions you need such as Wi-Fi, Bluetooth, GPS, and 4G LTE. And yes, it does support Gyroscope. Call quality is a no brainer as long as you’re in an area with good reception– the same goes when connecting to mobile data. GPS works fine when using navigating apps such as Google Maps, and Waze. 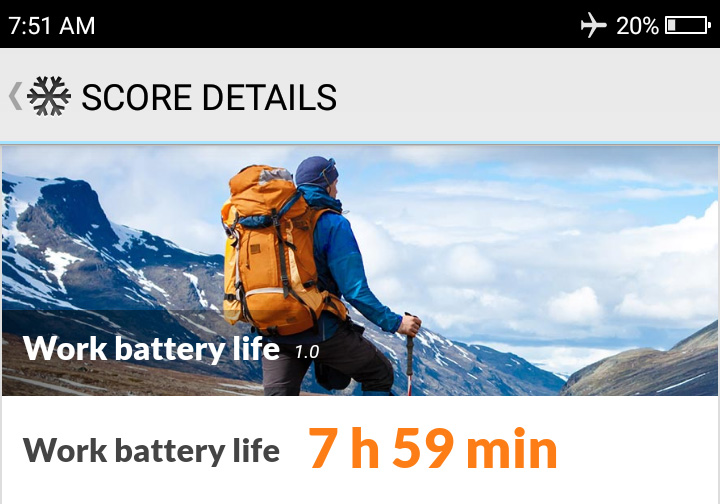 The Flare S6 Plus offers 3000mAh of battery that is good to last an entire day of moderate use. In our video loop test, which involves playing a 1080p video in Airplane mode at 50% brightness and 0% volume, the phone yielded 9 hours and 2 minutes and 7 hours and 59 minutes on PCMark battery test. Unfortunately, the phone is not equipped with fast-charging technology and charging the phone from 0% to 100% took us 3 hours and 15 minutes, which is quite a long time.

The phone provides three power saving options for you to choose from, including Regular Power Saving (best choice for playing video games), Smart Power Saving (adapts the CPU and GPU according to the usage), and Ultra Power Saving (only dialer and messages will be active).

The Flare S6 Plus is truly a step up from Cherry Mobile. With its premium build, TrueView display, 4GB RAM, 64GB storage, and of course, its quad cameras, we can say that this is a good deal if you’re looking for a smartphone below Php10K that is packed with an above average internal hardware. The quality of its quad camera’s shots are not to be underestimated as they produced good and sharp images. 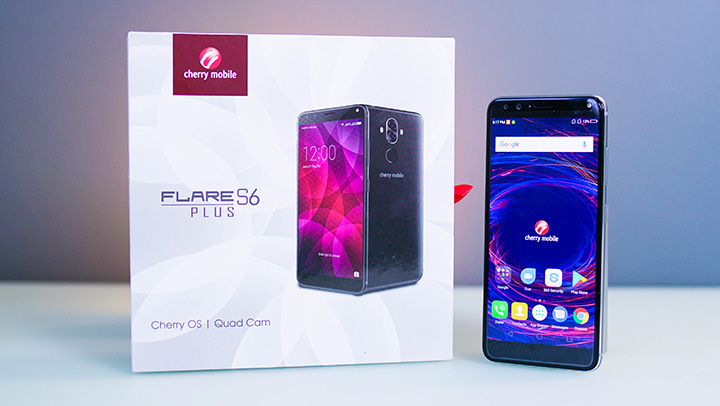