In addition to the Omega Infinity and the new Gem lineup, Cherry Mobile also announced the thinner and lighter successor of the CM Razor, the Cherry Mobile Razor 2.0. 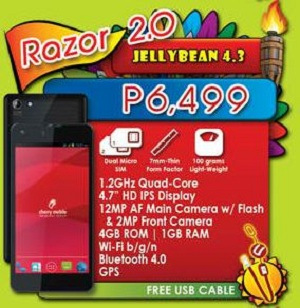 The Razor 2.0’s internals doesn’t differ much from its predecessor which comprises of a quad-core processor with 1GB RAM and 4GB internal storage. The rear camera was upgraded from 8MP to 12MP, but we have a feeling that it’s just the same snapper, only interpolated.

Apart from having a thinner and lighter frame, the only other notable upgrade on this new handset is the screen which is now slightly bigger at 4.7-inch, and has better resolution at 1280×720. Other than that, the Cherry Mobile Razor 2.0 is pretty much identical to first one.

As of the time of writing, there’s no word about the CM Razor 2.0’s battery. Hopefully the company was able squeeze in a bigger battery than the 1,750mAh found on its predecessor. The Cherry Mobile Razor 2.0 will be retailed for Php6,499 and will come with a free USB Cable (shouldn’t that be included already?), meanwhile the CM Razor is now being sold for Php4,999.