Cherry Mobile has officially announced one of the new members of its quad-core-powered family of smartphones and the successor to the Thunder we reviewed back in February, the Thunder 2.0.

The Cherry Mobile Thunder 2.0 sports a 5-inch FWVGA (480 x 854) touch screen display or equal to 196ppi, an 8 megapixel rear camera, 2 megapixel front-facing, 4GB of internal storage and a 2,100mAh battery. Running under the hood is a quad-core processor clocked at 1.2GHz, 512MB of RAM and Android 4.2 Jellybean. 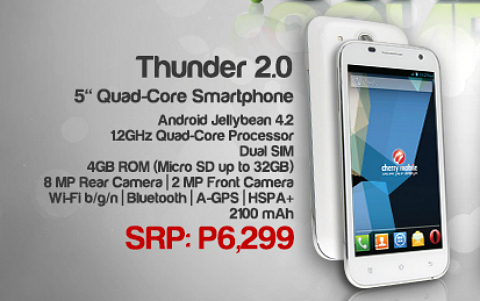