Samsung has recently announced its latest Android beast in the form of the Galaxy S4. Now lets take the rest of the Android elites from the likes of LG, HTC, and Sony and pit them against each other for a quick comparison in specs. 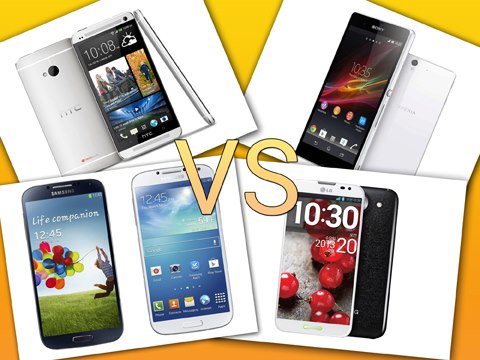 For this comparison, we have the Samsung Galaxy S4, LG Optimus G Pro, HTC One, and the Sony Xperia Z. 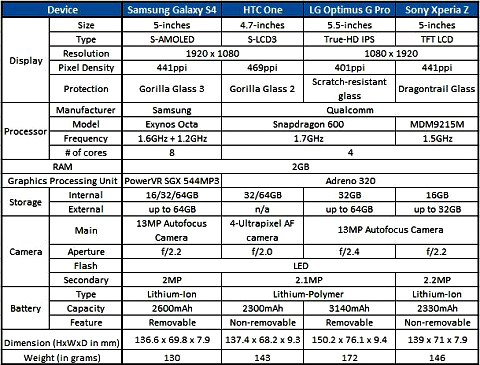 The LG Optimus G Pro leads the pack for having the largest display at 5.5-inches. But due to its large screen it has the lowest pixel density at 401ppi. The S4 and the Z ties at the 5-inch space with 441ppi while the One takes the lead for having the smallest but densest display at 4.7-inches with 469ppi. Meanwhile, all four phones utilizes different glass technologies with the S4 sporting Corning’s latest, the Gorilla Glass 3.

As for processing hardware, the S4 utilizes its own Exynos Octa processor while the rest are equipped with quad-core Qualcomm engines. There’s a Snapdragon 600 variant of the S4 as well but we’re more likely to receive the Exynos model here.

Among the four, the Galaxy S4 offers more options when it comes to internal storage. It comes in three storage variants with microSD support of up to 64GB. The HTC One comes second by offering two models, a 32GB and a 64GB. Unfortunately, HTC opted out microSD support on the One.

The S4, G Pro, and the Z all sport 13 megapixel AF cameras, each with their own unique software features and enhancements. However, the HTC One pulls out from the megapixel race with their 4MP “Ultrapixel” camera that claims better image quality due to its larger pixel size. As for the front-facing camera, all four phones have at least 2MP sensors with the Xperia Z having the largest at 2.2MP.

As you can see, all four smartphones have their own strengths and advantages. In all honesty, it’s difficult to conclude for now which one is the best as they all have their own hardware tricks. Take the Xperia Z for example. In a sink or swim situation, the Z can literally take on water while others sink to their deaths. Kudos to HTC as well for breaking away from the boring megapixel race and introduced Ultrapixels. Let’s hope it can live up to its name and not just a marketing BS.

Like I said earlier, it’s difficult for us to conclude which one is the best. So I’ll leave it up to you guys. Which smartphone do you think will reign supreme? Share your thoughts below.

hey z is best of all and 1.5 quad is enough samsung is such type of phone which rock for only 1 mounth then it make us disapoint

@galaxy note user
try to underclock your phone, yung tama lang naman para di mag-lag pag naglalaro ka,
Im getting the almost the same playing time as the one who posted above

My next upgrade will be either the Nexus 4 (I want pure Android Vanilla) or the HTC One.

no to Samsung! I have been using my galaxy note for more than a year now and I will never buy a phone made by samsung again! the silver sides of my gnote looks awful. 50% of the silver coating is falling off , the jelly bean update is very late and my phone’s battery life sucks bigtime.. if only I wasn’t stuck with the two year data plan contract from smart (very slow mobile internet) I would have used nokia 3310 instead of this awful samsung phone.. all those specs are useless when you have a phone that won’t even last 4 hours with constant internet/gaming use.. I just hope HTC one is nothing like these battery-sucker samsung phones.

im a gnote user too, my battery last for about 9hrs (walang bitawan), gaming at internet,
maybe youre just stupid, hahahaha
do some research before you buy and complain,

you can buy new one if the battery is your problem that is why removable lols. silver coating? im not yet encounter but i dont let that happen coz im caring my phone. My gnote it last whole day before drain.(wag complain ng complain)

“im a gnote user too, my battery last for about 9hrs (walang bitawan), gaming at internet,”

Xperia Z should be the smartphone for the smart Filipino… waterproof… no ondoy, no sendong, shockproof… no 8 magnitude earthquake haha

ill go for LG, because of battery size,
no worry about updates, if there are developers around,

Developers still rely on the official or leaked firmware for them to release ROMS. Either you wait for those or settle with AOSP/AOKP.

For now, I am planning to buy LG G pro and my next option is xperia Z but still have to wait for Motorola X on May,2013.