An executive from Xiaomi discloses the pre-order date for the Mi Note that sports higher-end specs than the previously-launched variant. It will be up for reservation early next month. 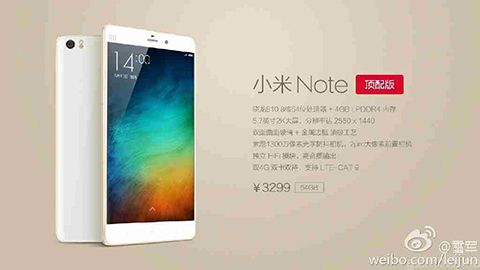 (Compare its specs against the previously-released Mi Note here)

Lei Jun, CEO of Xiaomi, announces on his Weibo account that the top-end version of the Mi Note will be up for pre-order this May 6, 2015. It will have a CNY3299 price tag (approx. Php23K) which is a bit steep for a Xiaomi product, but taking a look at the internals that it would be carrying might be able to justify it.

In addition to those beefy specs, the upcoming Mi Note will be clad in metal with glass for its form factor.