We’ve been itching to write a simple and straightforward comparison between the two entry-level dual SIM smartphones that we have reviewed over the last few days since many of you guys keep on contemplating about which phone is better over the other.

You can read our full review of the HTC One V and the Lenovo P700 so you get a better perspective.

Not all of us are able to shell out a big sum of money to purchase smartphones on a regular basis so we think it’s best to help some of those who are having a tough time choosing the device that’ll suit them best or give them more bang for the buck. Read on and hopefully you’ll be able to make your decision after. 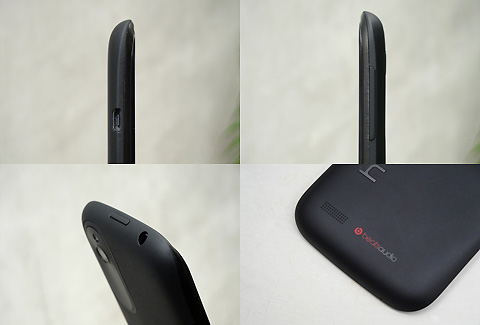 The HTC Desire V is built mostly from polycarbonate plastic with a painted, brushed aluminum trim surrounding the display, It’s also around 3/4 thinner than the P700’s chunky plastic figure and is certainly more handsome than its rival’s generic-looking fascia. The P700 on the other hand, is built from the same kind of material as the ‘V’ but feels more solid when held even with the absence of any metallic design elements [except for the faux, matte aluminum strip], yes you heard that right — in our opinion, the P700 feels more durable than the HTC Desire V.

Unfortunately, we could not confirm if the phones sported Gorilla Glass display covers but we tried doing some scratch tests using the edge of a micro USB cable (we all know how sharp those things are, for plastics at least) — both passed with flying colors. Gorilla Glass or not, you guys don’t have to worry too much about ruining the displays on these things, both manufacturers probably used fortified glass on ’em since if those were made out of plastic, we could have scratched them severely.

The volume and power/lock buttons on the Desire V feels more solid than the P700’s and it also features a multi-colored LED notification light. The P700 bounces back with a front-facing camera and more aggressive hyperskin-like pattern on the back shell which significantly lessens the chances of slippage and catches less fingerprints vs the rubberized black cover used on its rival.

Both phones feature 4.0-inch screens with the same 480×800 pixel resolutions, not much to go around really — except the Lenovo P700 features an IPS (in-plane switching) panel, IPS displays feature better color reproduction, contrast and most notably — wider viewing angles. That’s the first thing we’ve noticed on the P700 the screen is bright, crisp and colors dont’ get washed out even when viewed from awkward angles. The color saturation on the P700 is slightly washed out compared to the Desire V’s though.

The HTC Desire V’s screen is pretty good, color reproduction’s pretty accurate and blacks are very rich but the back lighting lacks brightness and we expected at least something like a Super Amoled panel to come with its premium price tag.

Both phones feature 5 megapixel main snappers with the exception of the P700’s additional front-facing unit, the Desire V does not have a front cam but — as we’ve mentioned — features a built-in LED flash instead.

Image quality on the Desire V is slightly better than the P700, no doubt about it. Images taken by the HTC contender are also sharper and colors are more saturated than the P700, both phones take images almost instantaneously but suffer in low-light scenarios, despite this, the Desire V advances further with the ability to take better photos at night courtesy of the LED flash.

Video recording could have been won by the P700 thanks to its HD 720p capturing prowess, unfortunately, videos taken by the phone suffered from corruption/stuttering which is very noticeable and annoying when being viewed on a larger screen. The Desire V can only record videos in standard definition, hopefully the video recording problems we’ve encountered with the P700 can be solved by a software update. As of now, we think it’s a tie.

The Desire V certainly wins when it comes to audio playback, the sound is far richer and clearer in comparison to the P700’s muddy audio output. That’s all there is to say really. Loudspeakers on the other hand sounded almost the same but the P700 was slightly louder than the Desire V albeit, distorted. The ‘V’s speakerphone tends to pump out slightly teenier sound which is great for notification tones but not for music or other related stuffs.

As for video playback, the stock video player app for the P700 wins here since it was able to play some of the movies we’ve stored in the micro SD card. The Desire V did not show a single file within its gallery for some reason but it was quickly remedied by downloading a third-party video player from the Play Store — same goes with the P700 if such issues arise.

Both phones ran customized versions of the Android 4.0 Ice Cream Sandwich. We won’t beat around the bush here as we obviously favor Lenovo’s “almost stock” approach on the P700 over HTC’s heavily customized Sense 4.0 UI on the Desire V.

Why? Well, the number one reason is that most smartphones within this segment don’t necessarily have roomy amounts of RAM. Second, adding unnecessary features to an otherwise light OS will result to higher memory usage and since these phones are not equipped with blazing-fast processors to begin with, performance issues will most likely arise. Finally, why fix it if it ain’t broke? We get it, UI customizations are what OEMs set each other apart but it seriously takes toll on a phone’s overall usability if not done right. When we reviewed the Desire V, we frequently complained about its sluggish performance while the cheaper P700 performed admirably well with the same kind of treatment.

We know that it’s unfair to judge a pre-production model against a final one (Desire V vs P700) since it’s not ready for prime time and the manufacturer’s yet to get everything smoothed out in the software front, unfortunately, that is the only experience we’ve had with a Desire V handset so that’s where we’ll be basing this comparison. We’ll update this article once we get our hands on a retail version.

Scrolling through Facebook, Twitter and Instagram was a much better experience on the P700, even Temple Run was playable on it while the Desire V struggled to respond to our touches. Navigating through the homescreens and application drawers was smooth on both devices though.

Benchmarks showed that both phones performed almost similarly except for the P700’s slightly higher results in Antutu and Nenamark2, this is where the Desire V’s lack of grunt becomes apparent. Also, video playback on both devices was pretty smooth (720×400 resolution) when using MX player, sometimes hardware acceleration isn’t available with some video formats but the CPUs were still able to keep the frame rates smooth even in software rendering mode.

It’s worth noting that the P700’s Cortex A9 + SGX 531 GPU configuration is slightly better than the Desire V’s Cortex A5 + Adreno 200, the Cortex A5 CPU core within the Desire V is certainly slower than the higher performance Cortex A9 microarchitecture found inside the P700. The Cortex A9 is the same core used in the Exynos 4212 powering Galaxy S3 (even the Nvidia Tegra 3). You guys already know which one to root for.

The ‘V’ and P700 both have their own clever ways of letting users choose which network to use when sending SMS, making calls and accessing mobile data. We like how HTC has made it easy to send an SMS via our desired network by implementing ‘send buttons’ dedicated for each SIM card, It’s certainly better than Lenovo’s solution (dragging down the notification bar). The Desire V comes with HTC’s own keyboard which was pretty much alright but we favored the stock ICS on the P700.

Call quality was pretty average on both phones but the V’s mic can get a little too sensitive at times, people on the other end of the line complained that they could either hear the air conditioner or electric fan (Which is a bout 9 feet away) loudly. Both phones do not feature background noise cancellation.

Network reception on both phones were pretty good, the Desire V fared slightly better here though, it could get around 3-4 bars of 2G/3G signal where the P700 would normally grasp about 2-3. WiFi and Bluetooth also worked splendidly on both devices, we weren’t able to test GPS lock times on both phones unfortunately since for some reason, the devices would choose to rely on cell towers instead of GPS even though Google’s location services was disabled, we couldn’t get an accurate reading too — we often found ourselves located somewhere in Chenjiang China (according to maps) which is really weird.

Both phones are capable of dual-active, dual SIM functionality which can take toll on the device’s battery. The Desire V packs a 1,650mAh battery while the P700 boasts a humongous 2,500mAh tank. The V was able to stay alive for about 15 hours of moderate usage while the P700 outperforms it by ticking happily for almost two days of heavy use.

The P700 is certainly heavier compared to the Desire V and feels more noticeable when stored inside the pocket due to the larger battery, but nothing beats the satisfying feeling that your phone will stay alive until the next day right?

So which one would you choose?

We’ve narrowed down all the common things people will experience when using the HTC Desire V and Lenovo P700, this post can be subjective since one person is different from the other so some of you may not agree with some of our opinions stated here, either way, we’ve done everything we could to help you guys make the final decision.

The price point of the HTC Desire V does not make any sense. Yes it does look good, It’s well built, it sounds great and it packs quite a bit of features but we just don’t think it’s gonna cut it. HTC is aiming at the wrong market segment here.

If we were to choose, we’d go for the Lenovo P700 for obvious reasons: It’s Php 6,000 cheaper than the Desire V, better display, it’s faster, comes with a 4GB microSD card and the battery life alone is worth considering. It may not have all the bells and whistles that its competitor has but why would we purchase a Php 17,000 mid-range smartphone if for the same price we can already purchase Google’s current flagship, the Galaxy Nexus? (grey market price) or something like the Xperia U which has twice the number of cores… or BlackBerry phone even? We can then spend the remaining Php6,000 for something else.

We’re no experts and it’s given that some of you may think that our decision is biased but we’re consumers too, we know what to look for in a smartphone, we also work hard for the gadgets we buy for ourselves. We hope we were able to help you decide on your next smartphone purchase. Good luck!