We’ve already introduced to you the P700 back then and we know that you’re all anxious to find out how this low-priced, mid-range smartphone has fared in our real-life usage test. Read on our full review of the Lenovo P700 after the break.

Most of the dual-SIM Android phones that are coming out lately are on the entry-level end. A few have reached the mid-range category with the likes of Alcatel and HTC with their Desire V. Lenovo is now also a strong contender with the P700. 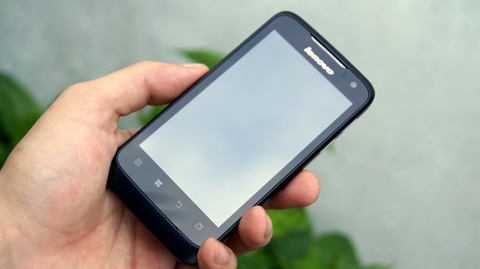 At a quick glance, the Lenovo P700 can be mistaken for something like the HTC Incredible S due to the slightly similar color and design cues. The casing of the device is a stealth-black polycarbonate plastic with a faux stainless-steel band that runs along its sides, the shutter release button and volume keys on the right side of the phone feels solid when pressed, on top is where the micro USB port and 3.5mm headphone jack is found as well as the small-ish power/lock key.

Lenovo seems to have a thing for tiny power/lock keys, we’ve noticed this on the A65 and the P700 is unfortunately a victim of this design scheme. The power button on the device is one of the most used buttons on a touch screen phone, so this is something that Lenovo should definitely address in their future devices. 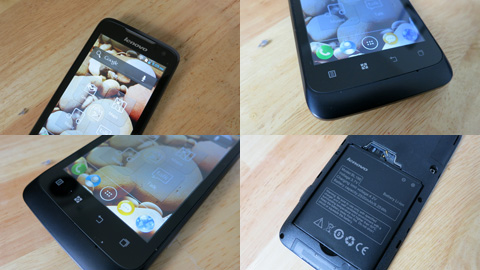 The material that they have used to cover the front of the device is very smooth and looks pretty durable, tapping on it gave off a solid ‘thud’ that’s often only heard on phones equipped with Gorilla Glass. It’s probably a fortified plastic of some sort but we can’t really be sure. The earpiece is protected by a metallic mesh and the front facing camera, light and proximity sensors are placed right beside it.

At the back of the phone is where the 5 megapixel camera and loudspeaker is found. The camera lens is raised a little bit which makes it prone to scratches, the back shell is covered in a grippy, rubberized texture that feels good in the hand. 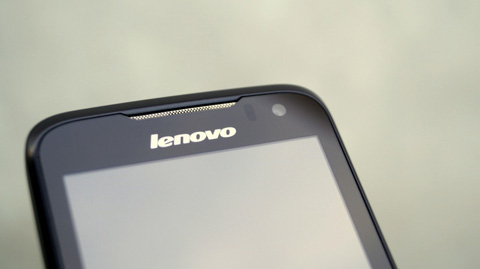 The P700 (just like the A65) is impressively built for its price, we’ve tried bending and pressing just about every square millimeter of the phone in hopes of seeing some signs of flexing or even the slightest creaks — but to no avail.

The phone’s 12.8mm thickness plus the monstrous 2,500mAh battery’s weight adds up to the reassuring feel when held. We’ll be completely honest here, the P700 weighs in at 162 grams and is built like a tank so it’s a bit heavy for its size, our little fingers became tired of using it after a while. Occasional bumps and drops are guaranteed not to be a problem for the P700 unless you have a thing for throwing smartphones.

The P700’s 4-inch IPS LCD screen looks really good at 240ppi (800×480 pixels), it’s certainly not as pixelated as some other devices out there and the colors are vibrant, blacks are certainly not on par with AMOLED panels since this is an LED back-lit LCD screen. Overall it’s a joy to use. Internet browsing on the P700 was a really smooth experience both on the stock ICS and Chrome browser, zooming in and out of pages can be stuttery at times so double-tapping when reading articles does the job better. Make sure to close apps that are running in the background to keep the phone from slowing down.

The stock ICS keyboard on the device was a joy to use as well despite our big thumbs, we haven’t experienced any lags and inaccuracies at all, the phone responded with the slightest of touch and the transitions from portrait to landscape were smooth. 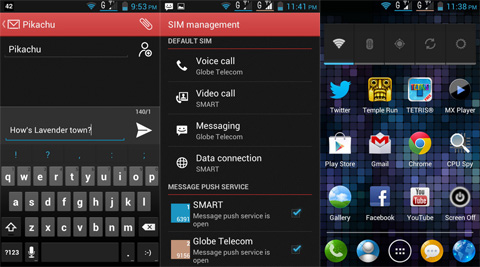 There’s a SIM management option under the settings menu, there you can pretty much set the default network/SIM to use for Data, SMS, Calls, and Video Calls. You can also quickly shuffle between the two networks when you’re in the messaging app by dragging down the Notifcation bar. Pretty nifty!

As for overall performance, the P700 was generally fast and smooth. The window transitions faded in and out pleasantly with no hiccups, the application switcher always appeared instantly when needed and almost everything have icons to let you know what it is and what it does — apart from the Gallery, Email and Clock icons which confused us at times.

There are some lags and few random freezes but nothing major, no reboots or ‘pixel salad’ that happened during the four days we’ve spent with the phone. Same as the A65’s ‘almost stock’ Android 2.3 UI, the Android 4.0.3 used on the P700 was stripped off with just the bare essentials remaining. Lenovo knows that the people they’re aiming for with the P700 won’t tinker with the options found in the ‘Developer Options’, sadly some of the options they’ve removed from the list are the ‘Force GPU rendering’ and the ‘Animation Scales’ both which are really helpful for improving the UI rendering speed.

There are a couple of custom applications that Lenovo has included with the phone such as Lenovo Note, Battery Saver and the Scheduled Power on/off but we rarely used them. The APK installer is probably one of the most useful apps when you’re trying to install APK files downloaded from other sites. Another useful app would be the Battery Saver, it lets you monitor your device’s battery usage and choose power profiles to save some more juice, we don’t think anyone will even bother using it but it can help a lot by saving battery power in case of natural calamities and blackouts.

The P700’s 5 megapixel camera actually takes pretty good photos, also, thanks to the stock ICS camera app the zero-shutter lag feature is on-board. Just tap to focus or half-press the camera shutter button and fire away. Images are taken in no time without sacrificing sharpness and saturation, it’s also very good for macro shots. Just don’t try to use the camera at night though, pictures come out really noisy and there’s no LED flash to lend you a hand.

You can take pictures/videos as well using the VGA front camera (stay away from it, trust us), the main cam on the other hand can capture videos in HD 720p, while the frame rates are generally smooth, the video quality isn’t.

For whatever reason, the videos we’ve recorded often show up annoying artifacts and stutters a lot, we really can’t complain given the feature set that Lenovo has shoved into the P700 for its price but it’s a letdown to say the least. After all, the P700’s sensor is a good performer.

Disappointment aside, we got surprised when the P700 played the movies we’ve uploaded to the phone using its stock player, colors really popped on the screen although videos were slightly fuzzy and stuttering occurred a lot which is forgiven since the movie’s resolution was 720p, try not to play files that are too large on the phone to keep the video playback smooth.

The stock player can pretty much support most of the standard video codecs but in case you encounter problems, you can always download a different player from the Play Store.

As for wireless radios, we’ve inserted a Smart SIM into the device’s first SIM slot (3G and 2G) and Globe in the other (2G only) the phone showed at least 1-2 bars of 2G signal for both networks when my Blackberry and Galaxy Note showed a constant 3-4 bars. We couldn’t blame the P700 for the weak readings since reception in our area is really horrid.

We didn’t experience and dropped calls despite the low signal level and call quality was pretty much okay on both ends, audio output from the P700’s earpiece was clear and warm. Bluetooth and the A2DP profile worked well with our mini HiFi at home, it’s also quick to establish a connection with our WiFi router so there’s nothing to worry about, this mighty thing has got you covered.

We’ve already covered this part in our unboxing post but we still want to highlight it here. That’s 1,990 for Quadrant and 3,529 for Antutu Benchmark are quite decent. Same goes with the 22.4fps score gained from NenaMark2. Those are pretty decent to good synthetic benchmark scores right there.

We’ve separated the battery life on this review since we know that most of you guys want to know how long the P700 can last on one full charge. Guess what? It didn’t disappoint.

Bad news is, we weren’t able to take screenshots of the battery stats since we had to remove the battery a couple of times in order to switch the Globe and Smart SIMs (Globe’s 3G network works better in some areas) but here’s the great news… the phone lasted us almost three days of moderate to heavy usage thanks to the high-capacity 2,500mAh battery which holds about twice as much power compared to its competitors. That is more than we can say compared to most smartphones out there that is within this price range. It’s worth noting that the whole time we used the P700, we switched between Mobile data and WiFi often (well, more like we never turned off the WiFi, we let the phone do all the switching), but there’s no denying that this thing has an amazing battery life. We haven’t tried using the phone on just a single network but we can guarantee that this thing will last just as long as a Nokia 1100 on a single charge. If not longer.

If you’re a very light user and only use one SIM, we’re confident that you’ll only have to charge this thing about twice a week.

Priced at just P10,999 the P700 can definitely fit everyone’s budget, unfortunately, the phone’s 1GHz Mediatek processor is not gonna blow anything out of the water but the dual-SIM capability, high-capacity battery and Android ICS certainly makes up for the phone’s lack in grunt. Great screen, lots of features, good performance, long battery life and a price tag that is not hard to swallow. The P700 is Lenovo’s perfect recipe for the mid-range smartphone market. We won’t be surprised if we see every Filipino lugging around one of these in the future — it really is that good.

Note: Not all smartphones are created equal, the software/hardware issues you may find in this review can be limited to just the device that we’ve used, it does not mean that all phones of the same model is plagued with such issues.

What we didn’t like about it:
* A bit heavy
* Rear camera lens is prone to scratches
* Only 1 SIM tray is 3G-capable