The RAZR M is the smallest and the thinnest of the three but has a 4.3-inch edge-to-edge qHD (960×540) Super AMOLED Advanced display. Perfect for those who want a larger display in a compact device. It has an 8 megapixel camera, VGA front-facing camera, 8GB internal storage, 2,000 mAh battery and weighs in at 126 grams. 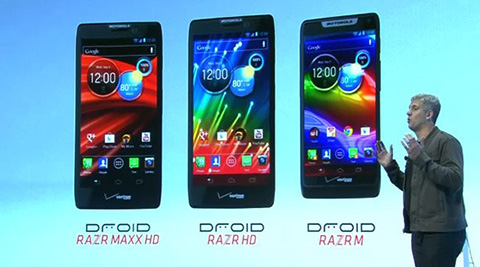 The RAZR HD MAXX is a beefed up RAZR HD. It has the same 4.7-inch Super AMOLED HD edge-to-edge screen but packs a 32GB internal storage and a huge juice tank of 3,300 mAh. It also has an 8 megapixel camera, 1.3 megapixel front-facing camera and weighs in at 157 grams. All three devices are currently running Android 4.0.4 Ice Cream Sandwich but a Jelly Bean update is coming later this year. Price and international availability is TBA.