O+ USA’s first smartphone loaded with Android Marshmallow, simply called as the M, has modest entry-level specs and a Php 4,395 price tag. Is it the next-generation device to buy this season? Here is our full review.

Parts from our Unboxing and First Impressions article were also incorporated in the review.

The strongest asset of the M may be the phone’s aesthetic. On the front are the usual sensors, its 2MP rear camera, the five-inch IPS display enclosed in a thick black bezel, and a silver call speaker grill. There’s a reasonably sized chin at the bottom to complement the one at the top and for easy handling when playing games in landscape orientation. O+ has also opted to use on-screen navigation keys on the device, which is a nice touch as well. 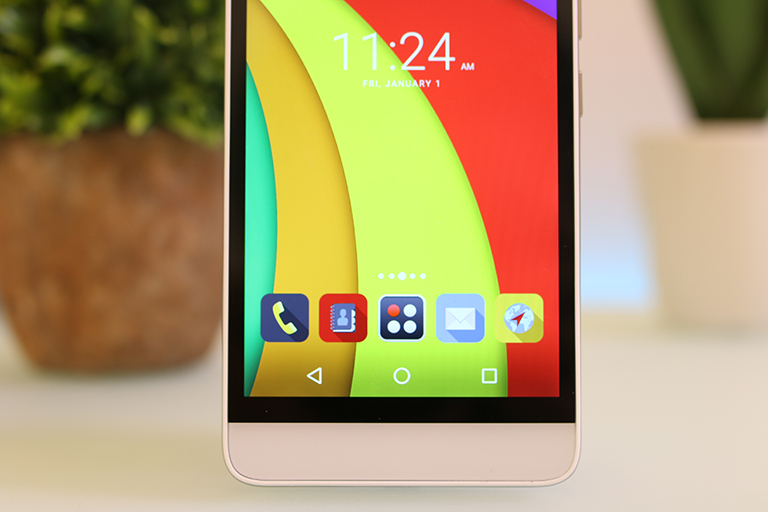 While the overalls of the device seem to employ a polycarbonate feel, the sides are complemented with a well-crafted lightweight aluminum frame that’s neatly sandwiched in between two polycarbonates — it doesn’t give off that bumped-up feel compared to other smartphones. 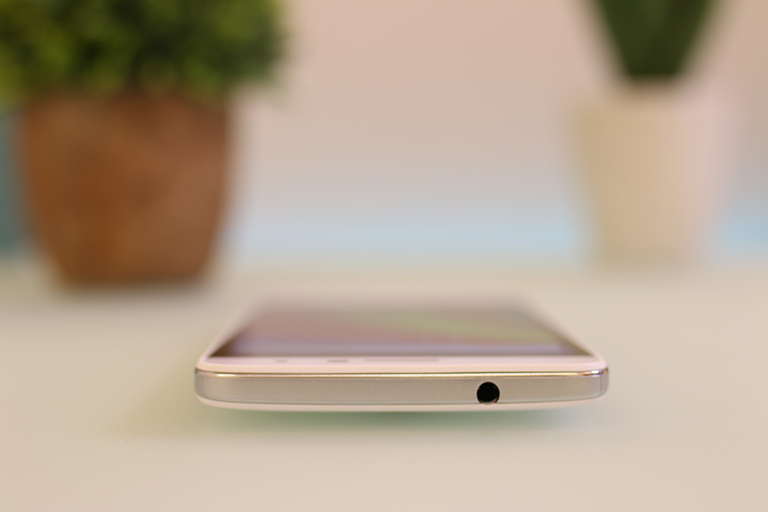 At the bottom lays the microUSB port and the microphone, and at the opposite top-left is the smartphone’s 3.5mm audio port. The volume rockers and the power/lock button are all on the right side and are placed conveniently in a location that is easily accessible by hand. They are also easy to press, which wouldn’t make much of a hassle for first-time users. 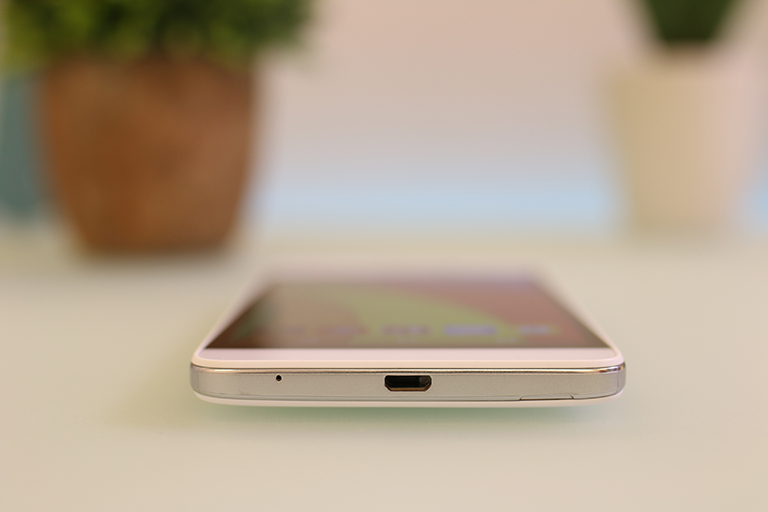 Turning at the back of the device, we have the 8MP rear camera emblazoned with its chrome accent and its accompanying LED Flash, the O+ logo and the usual ‘Designed for O+ in the USA’ marks, and a long loudspeaker grill. The back plate has a really nice matte finish in a pristine white color. It can repel some fingerprints, but greasy, dark-colored smudges may be its strongest foe. Operating it with one hand is a no-brainer, and is actually a lightweight device that doesn’t strain your wrist at long usage. Long-time grip could be a challenge as the device has an almost flat profile on most sides.

I’ve personally reviewed a ton of O+ devices, and it’s great to see the they have deviated away from the all-polycarbonate unibody shells with the usual rounded back edges akin to those of earlier iPhone generations seen on earlier devices such as the Xfinit and the Sonic, and presented itself with a device worthy of being called their own — it’s fresh, it’s well-designed, and it simply stands out from the rest of their own product lineup.

The M utilizes a five-inch HD IPS multitouch display, which resonates to around 67.41% when we’re looking at the screen-to-body ratio. Viewing from any angle is great, the colors are well-produced, and the amount of crisp needed for the device is just right, given that it’s only one of the few ones available under Php5K. Glare can slightly pick up when used outdoors, but the high brightness could easily suffice the harsh condition. Multimedia is decent, at the least. Sounds produced by the loudspeaker often have this hissing sound when certain tracks are turned up to the loudest possible volume. It also has a problem registering a few highs. Nevertheless, the loudness is enough to accommodate a quiet, medium-sized room. Listening to earphones ain’t a problem too, as it produces decent sounds via the default media player or another app of your choice. You may also opt to use the in-ear monitors of your choice, as the ones bundled in the package may sound a bit plain over time.

The eight-megapixel rear camera is a decent performer. It has great clarity, color, and detail when shooting stills. It may miss out on a few macro shots as it changes both focus and exposure, nonetheless it is a manageable thing. Low-light conditions may be assisted with an accompanying LED light, but it may not be as bright as you might want to, especially when capturing distant subjects. The 2MP selfie camera, too, is decent and the additional features such as a selfie fix could also enhance your self-portraits. You may take a look at sample photos below:

The video, on the other hand, takes Full HD videos at 30 fps in a 3gp format. It has no stabilization enabled, so you may render wobbly videos when using shaky hands. Here’s a sample clip:

The M, as the name suggests, is baked with a stock Android Marshmallow operating system on board. Unlike previously released smartphones, the M features consistent, updated iconography which is a pleasant sight to see. The user interface is left as stock as it can be, save for a few tweaks such as a ram booster app on the task-switching menu, a doodle control for phone functions such as waking up the screen and select apps, and the brand’s infamous air shuffle technology. 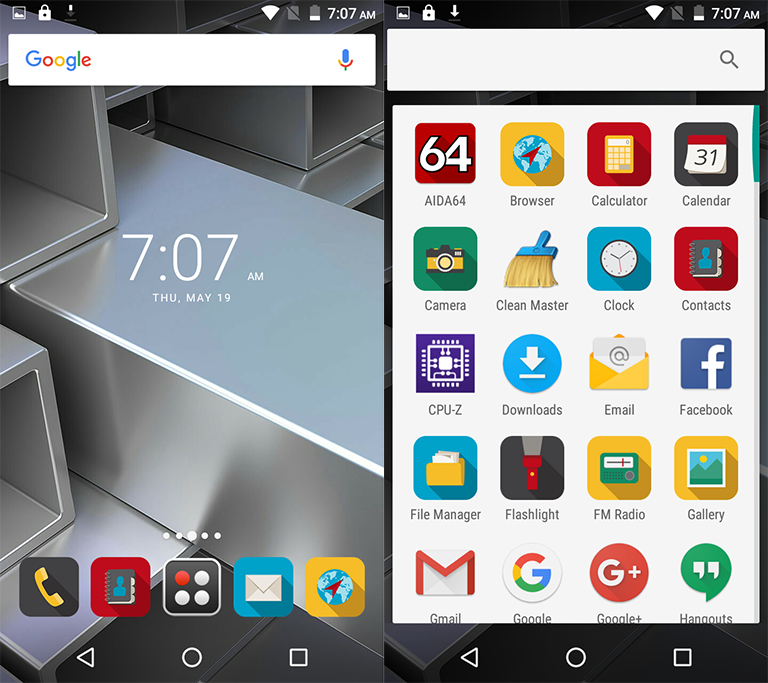 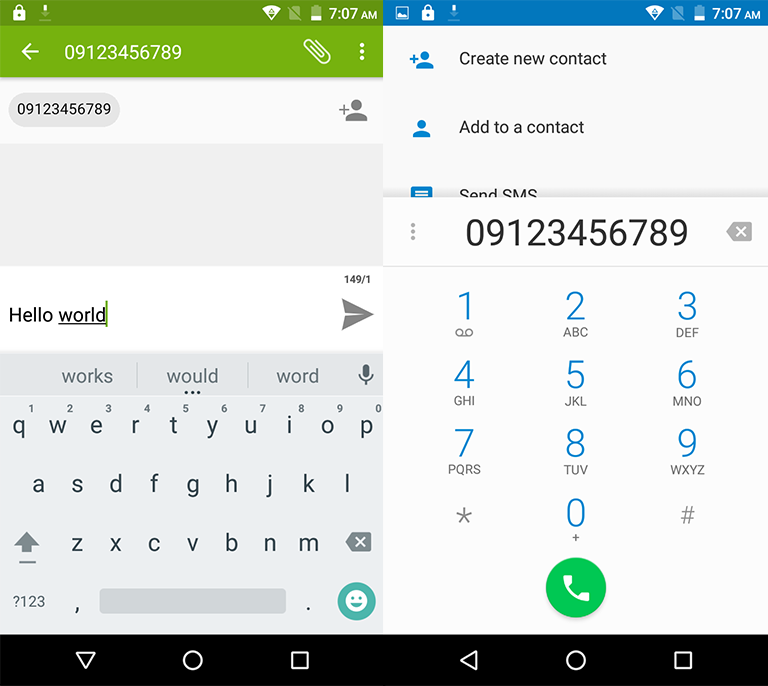 With that, there are a few apps preinstalled such as the O+ USA app, Facebook, and Clean Master. The choice of adding a ram booster may add a bit of annoyance but this is found to be uninstallable. Facebook, on the other hand, cannot be uninstalled. This leaves the user around 11.13GB of space for app installation and media storage.

The M’s performance is quite decent, as multitasking applications are easily handled. Very seldom hiccups may occur especially when there are open apps, but Android Marshmallow has a better app management than its predecessors. Despite this, playing games, even casual ones, may take a toll as we had several dropped frames and slowdowns on intensive ones such as Hungry Shark: Evolution and Zombie Tsunami. As the processor exerts more effort in handling tasks, heat takes up the upper back part of the device. We ran the smartphone on some of our benchmarks, and here’s what we got: 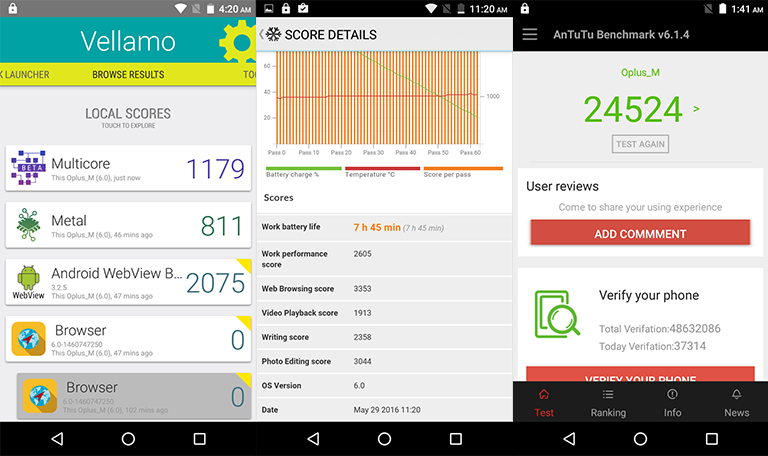 Signal is good despite the alloy sides, and call speakers are moderately loud and can be heard in an outdoor environment.  Other connectivity functions are working well: WiFi, Bluetooth, and mobile internet connect fast, but GPS has a few locking problems and at times does not point an accurate location which is a common problem with Mediatek chips. Nevertheless, that doesn’t hamper the overall performance of the device. 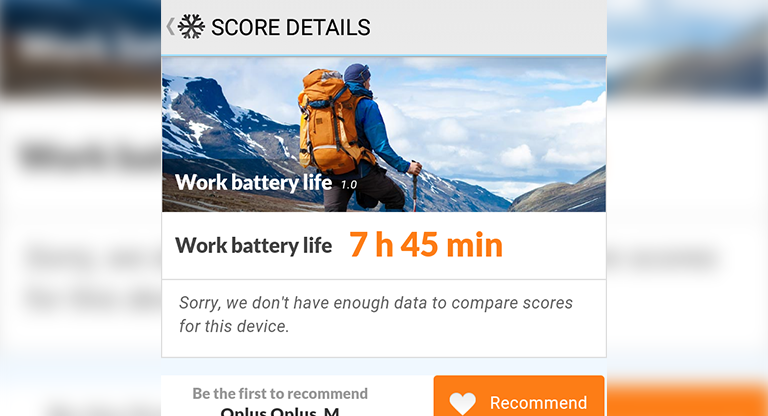 The M also got an average battery life considering it has a 2500mAh battery — it can last for up to a whole day with a little left to recharge on light to moderate activity of calls, texts, and in-app browsing with mobile data and Wifi turned on at different times. Upon our benchmark test using PCMark, it gave the device a respectable 7 hours and 45 minutes. This puts the device at the same level with the recently-released Flash Plus 2, which bears a significantly higher 3000mAh battery, if we’re basing it on benchmark scores. Looping a video on the device with airplane mode and 50% brightness resulted in 9 hours and 10 minutes.

I’ve particularly used this smartphone everyday during on assignment since I’ve lost my daily driver the other week, and the O+ M has definitely hit the right spots — it has the latest Android smartphone version available in the market today, and its features do not disappoint. Aside from exuding a more premium look and feel which is different from previous O+ smartphone releases, it emits a good display, and the camera is quite decent and can be a good handy snapper in case you need to take a quick photo on a whim. 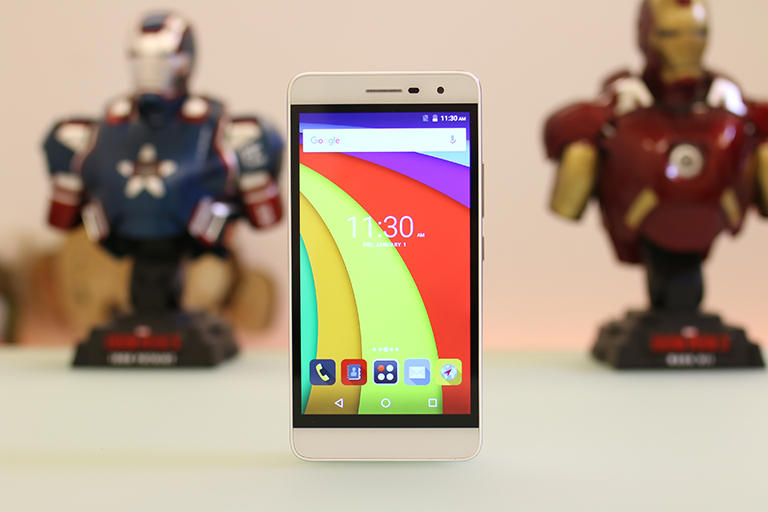 The only downside, perhaps, is its price. At Php4,390, it’s on the higher side of the scale considering there are other contemporaries that had been released are priced a lot less —  MyPhone’s my85 DTV with a Digital TV tuner, sporting almost the similar hardware configuration, is priced at Php2,999, while Cloudfone’s Excite Prime with 2GB RAM and a 13MP rear camera retails for Php3,999. A couple of hundred bucks more, and you’d get smartphones sporting better hardware without even breaking the Php5k mark. It’s also a device that’s not suitable for hardcore, graphic-intensive gaming, as it only sports 1GB RAM.

Nevertheless, the O+ M is a great device for those who are more into communication, as it has a decent battery life which can still be a deal maker for those looking for a smartphone configured with great battery optimization.

What we like about it:
* Good smartphone aesthetics
* Decent performing camera
* Good display

What we didn’t like:
* Price may be too steep given its specifications
* Black bezel surrounding the display
* Not for hardcore, graphic-intensive gaming
* Back cover is a fingerprint and smudge magnet