Place two 1-peso coins together and that’s almost how thin the new Oppo R5 is. Measuring just 4.85mm, the R5 is considered as the world’s thinnest smartphone. We had a short time to check out the handset right after the global launch in Singapore this week. With a display size of 5.2 inches, the R5 is just right on the hands. We were expecting the grip would be less comfortable than the iPod Touch as there’s very little area to hold. The slightly curved edges makes it more manageable.

Compared to the new iPhone 6 which is only 6.9mm thin, the R5 is still about 30% thinner. It’s even thinner than the iPod Touch which is already at 6.1mm thin. Very little room is left for the 3.5mm audio port so you’ll have to use a micro-USB port adaptor for your headphones. The metal alloy frame of the Oppo R5 is just 4mm thick but the camera protrudes slightly (0.85mm) making the final measurement pegged at 4.85mm. Oppo made sure that despite the thin frame, it is also the toughest body. So, we think it will pass the “bend test”. Each frame is hand-polished by craftsmen to make the edge finish smoother. The front panel is completely covered in glass with very thin bezels. The AMOLED screen has a full HD 1080p resolution, giving it an effective pixel density of 423ppi. The display is clear and sharp, has cool color temperature yet can be very bright when cranked up to the top of the scale.

In most cases, it looks better than the iPhone 6 along with their protruding camera lens at the back. The soft keys at the bottom of the display are etched into the front panel with the Menu, Home and Back buttons. 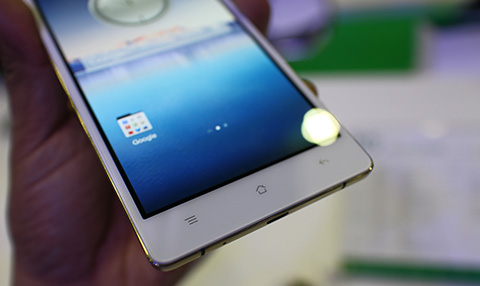 This is also the first time we’ve seen a handset powered by an octa-core processor from Qualcomm. The Snapdragon 615 runs at 1.5GHz on each of the 8 cores with 64-bit instruction set.

We failed to get some benchmark results due to lack of time. It uses the same processor in the HTC Desire 820 which scored 18,514 in Antutu so we’re expected to see the same on the R5. It’s not much but our limited time with it showed the device worked very responsive and fluid. Local representatives of Oppo Philippines shared that the R5 is expected to be released in the Philippines by middle of December at the earliest (otherwise, we’ll have to wait until 1st quarter of 2015).

For the Philippine market, the suggested retail price is pegged at Php22,990.

I wish they add a little more on the battery

“very thin bezel”? is it thinner than lg g2? very thin bezel would be the sharp aquos crystal… i would rather have a thinner bezel with bigger battery than a slim phone…

i’m hesistant to purchase this unit come weekend since my new Bose QuietComfort 20i Acoustic Noise Cancelling headphone has no place for this 4.85mm fone! Oppo R5, i believe, has NO headphone jack!!! ;(

yes, it has no headphone jack but i read somewhere that in the retail box has included a micro-usb adaptor for headphone…