The smartphone competition in the first quarter of 2019 is tight as brands are releasing various devices with more power without compromising their prices. The Realme 3, Samsung Galaxy M20, and Cherry Mobile Flare S7 Plus have a similar case. In this specs comparison, we’ll take a look at which affordable mid-range phone is the best in each vital aspect. Let’s start! 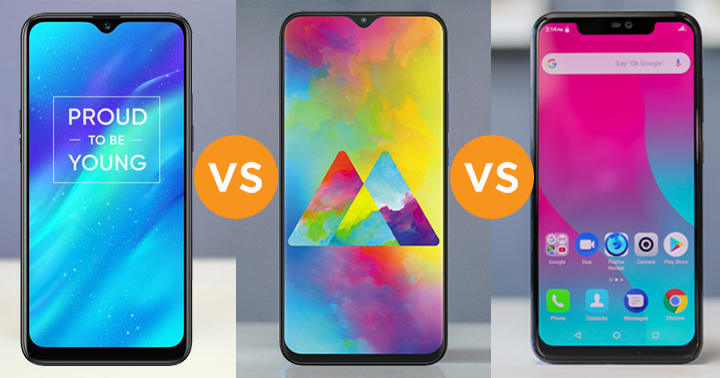 The Samsung Galaxy M20 has the largest screen size among the three, but its difference is not that significant. It’s also worth noting that the Cherry Mobile Flare S7 Plus comes with an LTPS panel which is an improvement from the usual IPS one (Check out the display differences here). Lastly, both of the previously mentioned devices comes with a Full HD+ resolution, but the Realme 3 only has HD+ which is quite a bummer.

Only the Realme 3 and the Flare S7 Plus come with a Gorilla Glass 3 which is good while the Galaxy M20 is said to have a Dragontail glass which also provides protection but is not as popular as Corning’s product.

Performance-wise, the MediaTek Helio P60 of Realme 3 and Cherry Mobile Flare S7 Plus have a faster speed based on their maximum highest clock speed. The Samsung Exynos 7904 of the Galaxy M20 is fairly newer so we don’t have enough data yet to know if it can be on par with the former.

For gaming experience, the Helio P60 comes with a Mali-G72 MP3 while the Exynos 7904  has Mali-G71 MP2. From this, we can deduce that the former will have a better performance over the latter. Also, the Realme 3 comes with a 3GB or 4GB RAM option while the Flare S7 Plus has 4GB. The Galaxy M20 can be considered as the less performing device in the bunch due to its 3GB RAM.

The Cherry Mobile Flare S7 Plus has the highest rear and front camera resolution, but that doesn’t mean it’s automatically the best among the three devices. Realme 3, on the other hand, sports a wider aperture which means that it can shoot faster and can capture brighter photos in low-light conditions. We’ll know more once we test out the camera performance of these devices in a few days.

Feature-wise, it’s great to see that the Galaxy M20 and Flare S7 Plus come with a USB Type-C port. The Realme 3 only sports a Micro USB port, but it makes up by having an update Android 9 Pie operating system.

In terms of battery performance, the Galaxy M20 carries the largest battery capacity while the Flare S7 Plus has the least mAh. Among the three devices, only Cherry Mobile’s creation comes with a wireless charging which is a unique feat to see in this price range.

Given their prices, converted or not, the Realme 3 is the best value for money given its performance and up-to-date operating system. However, if you are not used to seeing an HD+ display, you can go for the Cherry Mobile Flare S7 Plus if you’re sensitive to display panels, a more accurate face unlock feature, Stock Android UI, and wireless charging technology. You can also pick the Samsung Galaxy M20 due to its large battery capacity and a newer Bluetooth version.