Weâ€™ve recently attended the official announcement of the Huawei U8860 (Honor) and been dazzled by its features and most importantly its price. So we had an idea to compare Samsung Galaxy Ace Plus which is in the same price range as the Honor to give you guys an insight on which phone will give you more bang for your buck.

Specs-wise, the Huawei Honor clearly has an advantage over Galaxy Ace Plus. The only good thing going for the latter is its Bluetooth 3.0 support that is not much of an advantage either.

Software-wise, the Ace Plus offers the usual TouchWiz UI while Honor offers a pre-installed cloud storage app that give users up to 160GB of free additional memory. 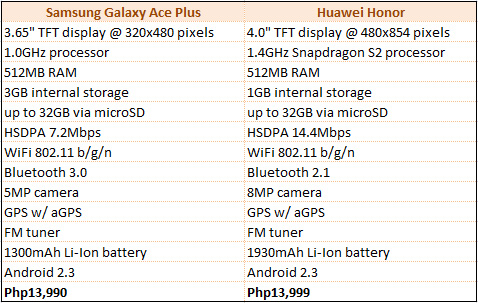 As mentioned on our Huawei Honor preview, the team is committed to bring ICS to their handset within the second quarter of the year. Not the same can be said for the Ace Plus. Regardless of the authenticity, I think that both of these handsets can run on ICS with a little bit tweaking and some painstaking effort from developers/hackers.

Basing from the specs alone, this is a lop-sided match for the Huawei Honor. But one thing that I think the Galaxy Ace Plus have edge over the Honor is the brand. Huawei, being a fairly new company in the smart phone world, will have a bit of a struggle breaking in to the Philippine market unlike Samsung. Weâ€™d like to know your thoughts about this.