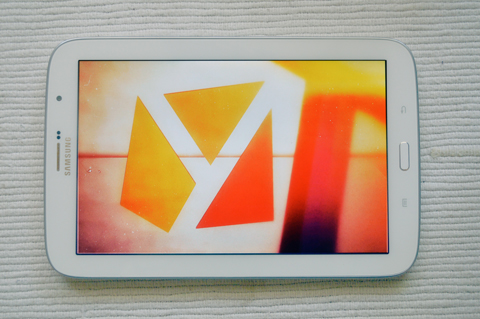 Most folks think that the Galaxy Note 8.0 was Samsung’s response to Apple’s iPad Mini. However, if you trace back Samsung’s tablet history, they were the first one to make a 7-inch tablet with the Galaxy Tab 7 (introduced in September 2010).

Since then, it was followed by the Galaxy Tab 7.7, Galaxy Tab 8.9 and then the Galaxy Tab 7.0 Plus and Galaxy Tab 2 7.0. The Galaxy Note 8.0 is already the 6th in the line of 7-8 inchers. So it’s only but logical to believe that it was Samsung who convinced Apple to make the iPad Mini.

Before we get into the meaty details, check out our video preview below:

If you’ve tried the Galaxy Note 2 and the Note 10.1, we’re pretty sure majority of the features and functionalities are just the same. The Note 8.0 is mostly a play on the size and form factor of the tablet and nothing more.

The Galaxy Note 8.0 can be easily identified as Samsung. It looks like a much larger Galaxy Note 2 with slightly different details. Plastic surrounds the hardware of the device, creating a lightweight feel for the tablet. It doesn’t feel as cheap as you’d expect and is solidly constructed all around. It may get hard to hold with one hand though, as you’ll really need two-handed operation. 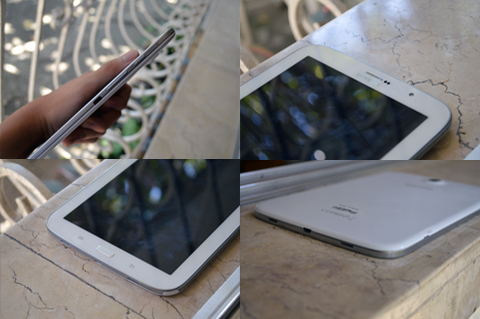 Samsung employs the menu, back and home buttons down below the display which is a unique call compared to other tablets. In practice however, it doesn’t feel any different from on-screen buttons.

Some news are stating the Galaxy Note 8.0 will also come in different colors, specifically black. For the meantime, we’re stuck with white and we have to say it gets pretty dirty really easily. The back basically attracts mostly any type of dirt or debris that it can encounter, so keep in mind to buy a case or to have a cloth with you to help clean the device when needed.

The Samsung Galaxy Note 8.0 features an 8-inch LCD display with a resolution of 800 x 1280 pixels, which gives out a ppi of 189. Now, for multimedia purposes, the 8-inch idea works well; it’s a convergence of portability without much compromise for experience. It feels much better for use with the S-Pen, but on the other hand, the display makes things less portable than a 7-inch tablet (totally no one-handed operation) and more crazy looking for a phone. 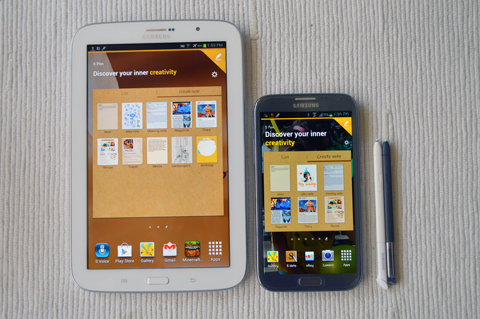 The resolution of the device feels like it’s on the edge of being good. It’s acceptable for the most part, but there are just some cases like the icon texts where we feel like pixels have the tendency to show. Color saturation works great here as an LCD panel. It’s no AMOLED screen, but it does quite well compared to it as blacks have a certain depth to it. We didn’t have a problem with viewing angles on the other hand, and even elements such as the brightness level impressed us as well.

Android 4.1.2 runs the show here, but is skinned similarly to other Samsung devices. Moreover, it features the apps that can be found on other Note devices too. Samsung is obviously pushing you to use their native software — AllShare, Samsung’s Hubs, Paper Artist, aNote HD, Dropbox, S-Voice & all the other Samsung apps such as S-Planner.

Also included are all the features found in the Samsung Galaxy Note 2, such as AirView. 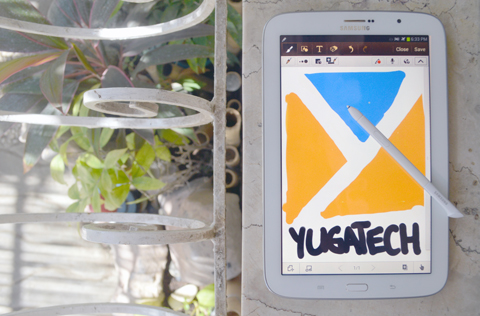 The slightly longer S-Pen now works with the capacitive buttons unlike before, and we observed that palm rejection works great when drawing stuff with the stylus. It was responsive all-around, and from navigation to drawing/handwriting.

With the bigger screen, Samsung did very few difference from their phone interface. It’s very similar to the phone UI, and has less similarities to, let’s say, the homescreen of its bigger brother, the Samsung Galaxy Note 10.1.

Video playback goes smooth as we said that the display greatly compliments the experience. The speakers come as a great partner to the said experience as it produces loud and clear audio compared to other devices. Like we said, the speakers go at the bottom of the tablet and not behind it, which equates to no nuisances at all. 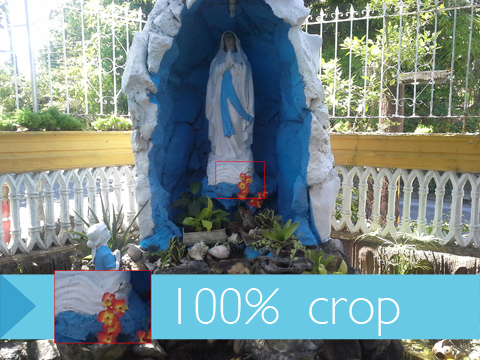 For a tablet, the 5MP camera does great on good lighting conditions since details remain sharp and colors remain vivid.

On low-light environments, the image quality starts to struggle and becomes grainy. Luckily, if you can adjust photo lighting to your preference through 3rd-party software, your photos may not turn out to be useless after all.

Video capture at 720p works average on the other hand. Mediocre is the sound captured and focus is on the slow side since details remain flat while everything works smoothly from colors to exposure management.

We were disappointed that, despite the powerful hardware, the device cannot record a full HD 1080 video.

The tablet features an IR blaster so that you can use the tablet as a remote for your TV. It comes with bundled software and the selection of media devices that it can manipulate is quite good. The software however needs to be sorted out as two-digit channels cannot be inputted with a TV that needs a specific button for it – and the software doesn’t have that button. To cut it shortly, you’ll need to go to two-digit channels manually by default.

With a 1.6GHz quad-core processor under the hood, along with 2GB RAM, the device runs very smoothly. From social networking to gaming, we didn’t encounter problems with it.

The Galaxy Note 8.0 got a score of 6,787 on Quadrant, 16,946 on Antutu &amp and 59.6fps on Nenamark 2. The results definitely showed that it packs almost the same hardware muscle as with its other Galaxy Note siblings. We ran it through a video loop at 50% brightness and 50% volume, and we managed to drain a full battery in more or less 5 hours. Through moderate use (slight gaming and internet browsing), it managed to live through a day with a little more juice before sleeping.

While some portion of the market would bend towards bigger tablets, while the others go towards the smaller ones, the Samsung Galaxy Note 8.0 tries to meet both needs – and safe to say it succeeds. It’s no titan in the camera battlefield, and it might look crazy if you’re going to hold it up to your ear to take a call, but if you can go buy a Bluetooth headset and accept a size compromise, the Galaxy Note 8.0 can easily replace all your mobile devices — your large tablet and your smartphone. It’s about Php2k more expensive than an iPad Mini WiFi+3G but we think Samsung’s Galaxy Tab 2 7.0 P3100 (WiFi+3G) already has that price point covered at Php15k.