Samsung finally made the Galaxy Note FE (Fan Edition) available in the Philippines last October. It pays homage to the original Galaxy Note7 that had a short-lived run last year. 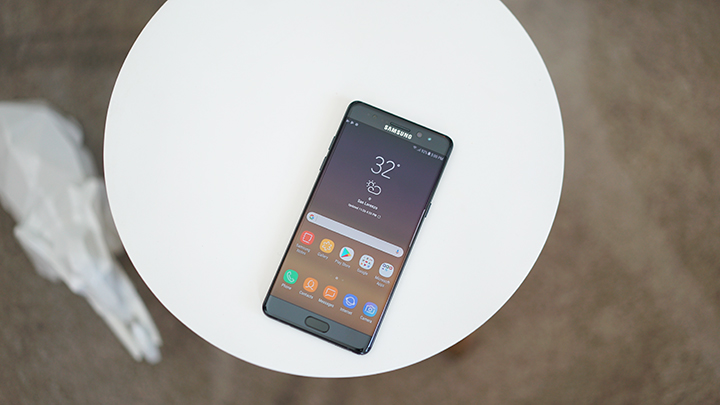 There’s not a lot of difference between the Galaxy Note7 and the Galaxy Note Fan Edition. There’s actually just two noticeable difference — the lower-capacity battery (3,200mAh from 3,500mAh) and the latest Android update (Nougat from Marshmallow). The dimensions are also exactly the same except for the net weight that went down a bit (167 grams from 168 grams, due to the reduced battery).

The name Galaxy Note Fan Edition (Galaxy Note FE) was carefully made to avoid the connection to the original Note7 (since airlines continue to ban them in the cabin) yet resembles a tribute to the fans who really loved the original one. So here you are — a slightly revamped version of the original favorite at a slightly lower retail price. Besides, Samsung had millions of unshipped and recalled units and it would be a waste to jump dump them all in a landfill. Re-assembling all of them with a new and much safer battery was the logical thing to do.

We suggest reading up on our full review of the Galaxy Note 7 since around 70% of our review will be similar.

This is the same old Galaxy Note design that everybody really loved — a large screen in a compact body. The 5.7-inch screen might not be that huge in 2017, considering the Galaxy S8 has 5.8 inches and the Galaxy S8+ has 6.2-inches, the Note FE is not far off. Before moving to the 18.5:9 aspect ratio, the Note FE can be considered as among the best-looking device with a 16:9 aspect ratio. The 79% screen-to-body ratio is actually impressive (current 18:9 devices are around 82%) since the fingerprint sensor and home button are still at the front.

The power button is found on the right side while the volume controls are on the left. The SIM card slot is up top along with the noise-canceling microphone. At the bottom end are the 3.5mm audio port, primary mic, speaker grille and the USB Type-C charging port. The slot for the stylus pen is also found in the bottom right corner. 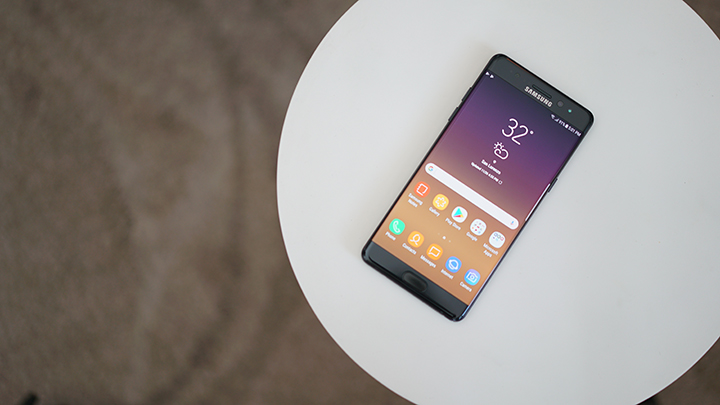 Up at the front is an all-glass panel protected by Gorilla Glass 5. While the edges are curved, they’re not as pronounced or curvier than the Galaxy S7 Edge. While looking very similar to the S7 Edge, the profile is still distinct.

The front camera, sensors, and loudspeaker are at the top corner while the home button/fingerprint sensor is at the bottom corner. We really missed the physical home button and fingerprint sensor at the front. It’s easy and quick to use and unlock the phone and also serves as a shortcut to launch the camera app (just a quick double-tap). 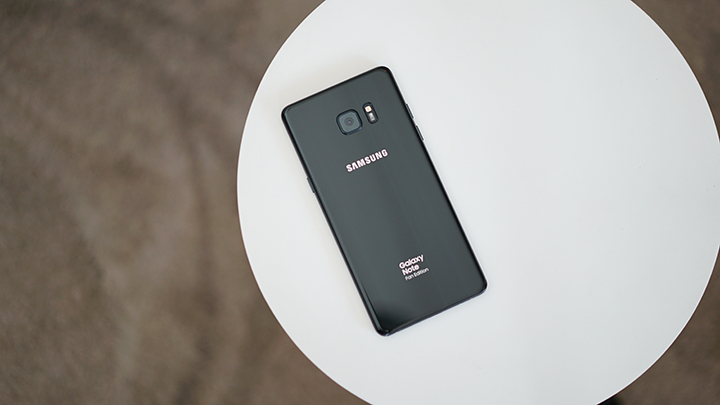 The back panel is all glass as well, protected by Gorilla Glass 5. A single camera is right smack in the middle with the dual-LED flash right beside it along with some sensors. The Samsung logo sits below the camera module and far down is a label printed in large bold letters “Galaxy Note Fan Edition”. Samsung does not do this before but it has to properly label the Fan Edition so that people will not mistake it for the recalled Note7 (spares you the headache at the airport as well).

There will only be one storage variant and that’s 64GB although upon inspection available space is only 52.3GB and 571MB is allocated as reserved space. The internal storage is complemented by a microSD card slot that supports up to 256GB capacity.

The Note FE is also IP68 rated with dust and water-resistance of up to 1.5 meters for as long as 30 minutes.

Maintaining the 5.7-inch display size, Samsung uses the same Super AMOLED technology in the Note FE with a quad HD resolution of 2560 x 1440 pixels giving it a pixel density of 534ppi. 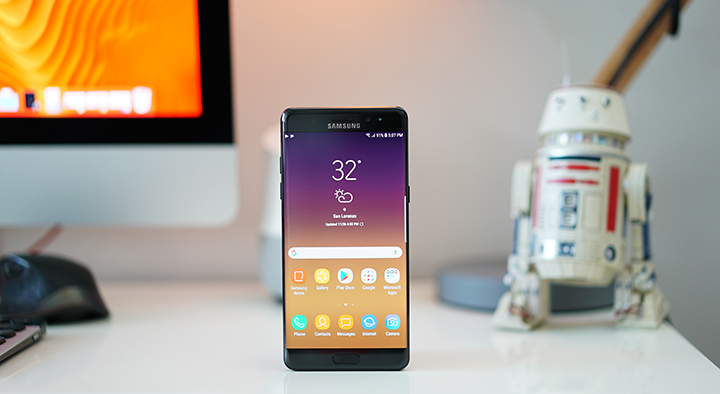 Samsung was the first one to use Gorilla Glass 5 on the Galaxy Note and continues to do so with the Note FE. Both the front panel and the back panel are protected with a layer of Gorilla Glass 5. Corning claims Gorilla Glass 5 can survive up to 1.6-meter or shoulder-height drops onto hard, rough surfaces up to 80% of the time. 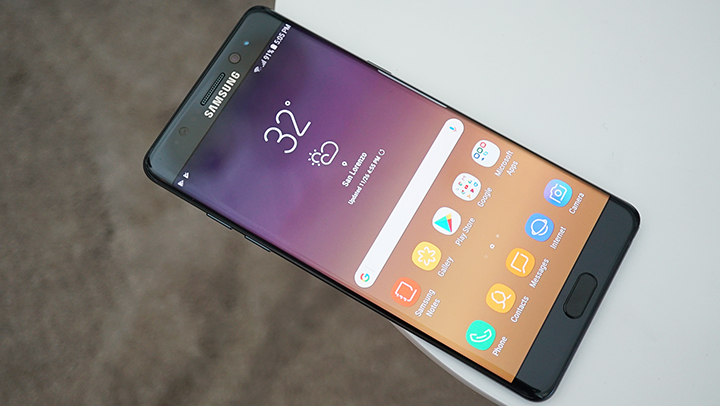 The screen also features a Blue Light filter (available via the drop-down shortcut window) to help ease the strain on the eyes especially when viewing the screen in the dark.

The single speaker grille at the bottom produces really loud and balanced sound. Audio quality is pretty good and ideal even for watching a movie or streaming YouTube without any earphones.

The S Pen stylus is very useful for taking notes, sketching or drawing, and adding a few more productivity features only unique to the Galaxy Note series.

Samsung used the same exact camera in the Galaxy S7 with the Note FE — Same dual-pixel technology and HDR video tucked inside the 12MP rear sensor. In fact, they even used it with the Galaxy S8 and S8+ earlier this year.

As such, we thought we didn’t have to dwell much further in this section except for some sample photos and videos as well as improvements in the native camera app of the device. Basically, all the settings have been hidden in swipes. Swipe to the left for the modes; swipe to the right for the filters, and swipe up and down to alternate between front & rear cameras.

There’s 4K video recording at 30fps and you can also do slow-mo or time-lapse as shown in the sample video above.

The device came with Android 7 Nougat right out of the box with Samsung’s TouchWiz UI layered on top. While there’s really not that much design improvement from the previous version, the focus was making the S Pen more useful and incorporating all of the Edge Panels into the Note FE.

The Always On Display now supports 3rd-party apps so you can see notifications from chat apps and messengers even if the screen is off. The same is true with music players — you can see what’s currently playing and even control playback from the “Off” screen. Aside from the Smart Select we first saw in the Note 5, the Note7 also feature Smart Video Select. This feature allows you to select a portion of the video and save it as an animated GIF which you can then post Facebook or Twitter.

The old S Note has been replaced with Samsung Notes (no more memo app, action memo, S Note and scrapbook) which is a more integrated shortcut menu for the S Pen. Again, there’s also a translator now for the S-Pen. What hasn’t changed is the Edge functionality. You can peak through notifs while the screen is off, it lights up when new ones come and the phone is facing down, and the Edge Panels are basically the same. However, having the S-Pen and the Edge over to the side can be a little messy, so we just deactivated it after a while.

The Iris Scanner software also covers the basics, and it works incredibly well. However, the functionality is limited by software too as it stutters sometimes, and we’re not entirely sure if it is faster than just a fingerprint scan. It’s very useful, however, for features like Samsung’s Secure Folder for apps – not for phone unlocking.

Samsung still used the Exynos 8890 octa-core processor for the Note FE. This is paired with an outdated Mali T-880 GPU, 4GB of RAM and 64GB of storage. 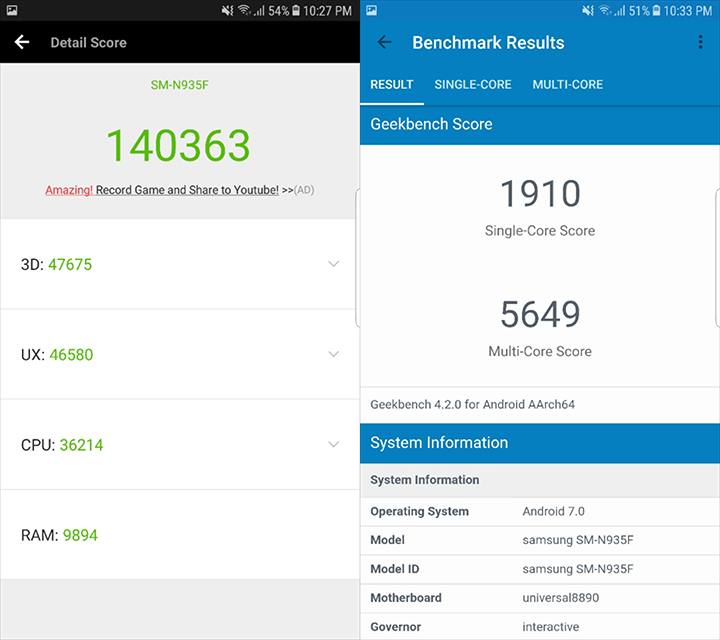 Benchmark scores have slightly improved, courtesy of the more optimized Android 7.1 Nougat. Here are the results:

Except for Antutu which scored a bit higher (by 6,000 points), the benchmark scores of the Galaxy Note FE remained the same. Back then, the Mali-T880 GPU is still one of the top mobile graphics processor but it’s not as competitive anymore especially that Mali already has the G71 and G72 GPUs out on many other flagship smartphones. 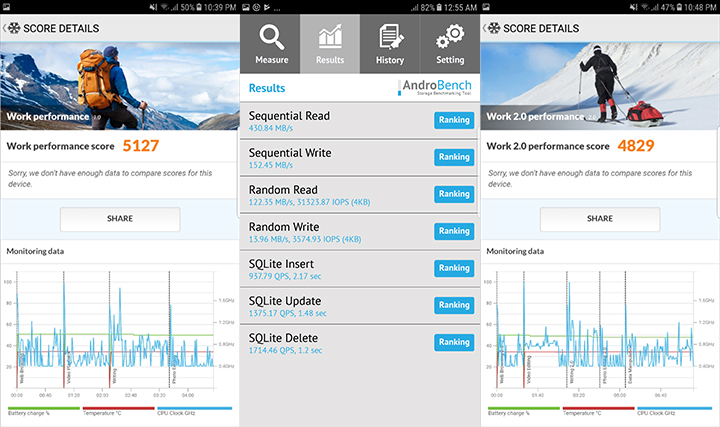 The Galaxy Note FE is still a good-performing device even by today’s standards but don’t really expect a lot from it.

Call quality is good and voice calls are clear and crisp. The dual nano-SIM tray supports LTE on both SIM with the second SIM able to handle up to 256GB of microSD card. There’s fast WiFi 802.11ac, Bluetooth, and NFC. The Heart Rate sensor is also integrated into the rear LED flash of the device.

The physical home button of the Note7 also serves as the fingerprint sensor. It’s now faster, just like the ones in the S7 and S7 Edge. However, for extra security, Samsung has also incorporated an Iris scanner which is another first for Samsung. 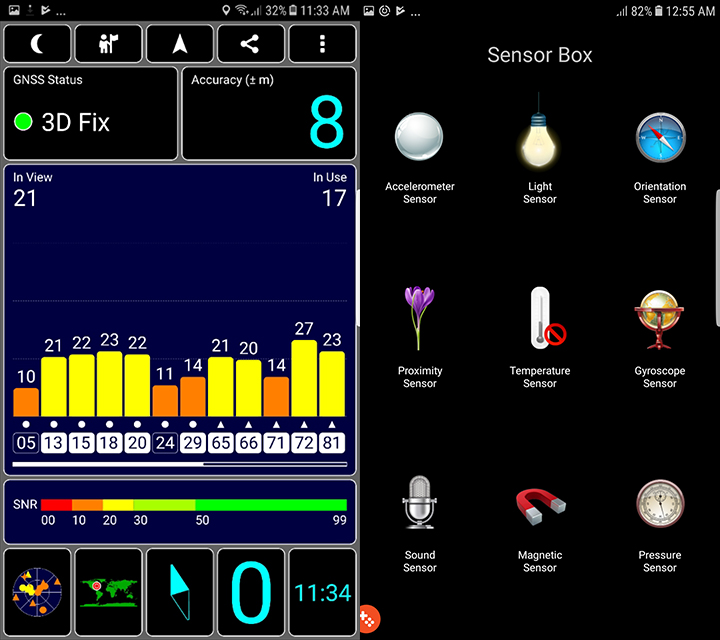 The Iris scanner takes a retinal scan of the user and uses it to unlock the phone. The sensors are located at the top corner of the display. Based on our tests, the Iris scanner is very accurate and fast. We even tried using it in a dark room and it still managed to identify and scan our eyes.

The Galaxy Note FE has a slightly lower capacity battery. This was reduced from the original 3,500mAh to just 3,200mAh. It’s a mere 9% reduction in capacity to give more space or breathing room for the battery inside. 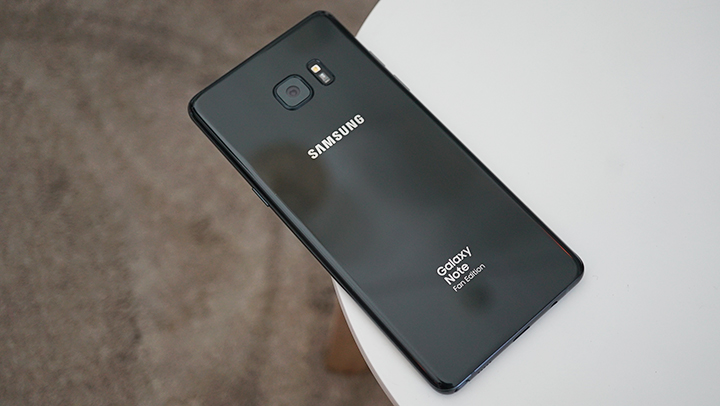 As such, we expected the battery life to be a little shorter. The Galaxy Note FE clocked 8 hours and 22 minutes in our PCMark Battery Test at 50% brightness and in airplane mode. This is 2 hours shorter than the 10 hours and 24 minutes we got from the original Note7.

The Galaxy Note Fan Edition is a fitting tribute to the old Galaxy Note series. This model came about because fans truly wanted it revived and released back to the market. The design is already a year old but it’s still as beautiful and impressive as ever.

The old design layout is what will set it apart from the current lineup of Galaxy S8, S8+ and Note8 series. 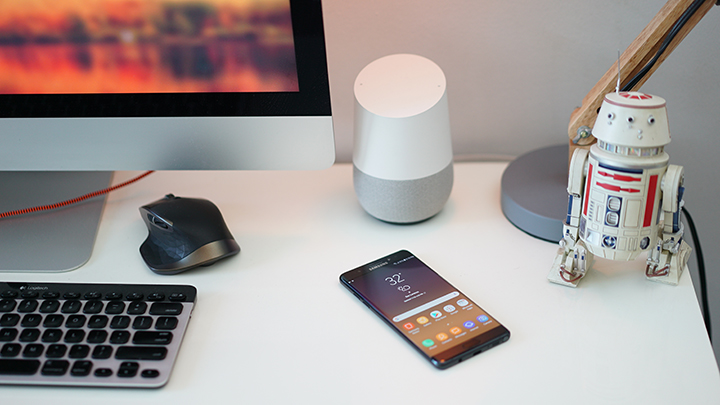 Even with a year-old design and a year-old hardware, the Galaxy Note FE can still handily go head-to-head against many other flagship smartphones of 2017.