It’s the battle of the 18:9 displays this time as we pit the Cloudfone Next Infinity and the Cherry Mobile Flare S6 Deluxe head-to-head. Let’s start! 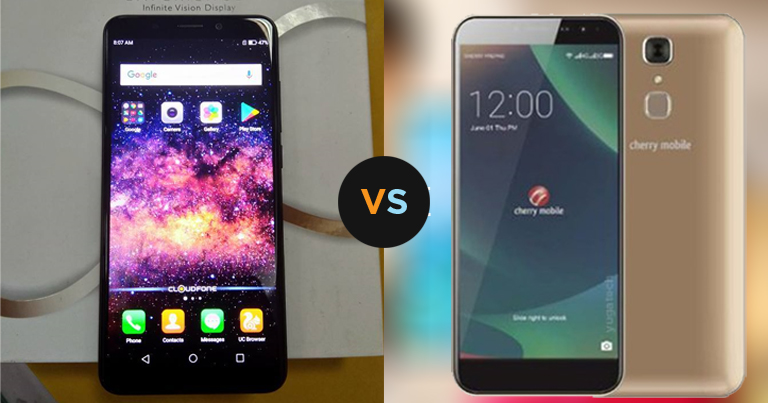 The Cloudfone Next Infinity is part of the Infinity series that has been released just recently by the company. It has a 5.7″ HD+ 18:9 IPS screen display with 1440 x 720 resolution, a Snapdragon 425 processor, 16GB internal storage, 3GB RAM, 13MP Phase Detection Auto Focus (PDAF) rear camera with LED flash, a 16MP front camera with a soft light flash, and 2,900mAh battery.

Both smartphones’ displays are of a 5.7″ IPS LCD make, and they are both good display specs even for an entry-level smartphone. What’s amusing is that they both follow the 18:9 screen aspect ratio trend that has been with most of the new smartphones in 2017. In terms of viewing experience, users will find them equally appealing if they are fond of watching videos since there is practically no difference between them.

The Next Infinity bears a Snapdragon 425 while the Flare S6 Deluxe is built with a MediaTek MT6737 chip, both quite dated for 2017 devices. The former still has a better CPU performance based on paper and checking out the benchmark scores of the devices we previously reviewed carrying the same chip. In terms of gaming experience, the Flare S6 Deluxe has a slight advantage since it has more gaming potential than the Next Infinity.

Both smartphones have the same rear camera resolutions. The Next Infinity, however, could be a hit with the selfie folks as it sports a front camera of higher resolution. We do not have sample photos, but we will definitely capture images once we get our hands on the units.

There is only a little difference in their battery capacity. The Flare S6 Deluxe has a slightly higher capacity compared with the Next Infinity. As for battery life performance, expect that both smartphones will last almost the same time when tested.

The Cloudfone Next Infinity is priced at Php 6,999 while the Cherry Mobile Flare S6 is the cheapest 18:9 device today at Php5,999.

For an entry-level smartphone, which would you like between the two? Let us know your thoughts in the comments section below.

how can you make a judgement when most of cms specs are tba? sponsor advertiser bias?

We are paid zero by brands to make comparisons like these. The spec sheet for the CM Flare S6 Deluxe is already available at Cherry Mobile’s Facebook page, and we used that as basis for this comparison. The remaining specs affect minorly and we will update the article as we get them.

If you can tell which 1 has better call quality, thats the 1 i will choose. Believe or not, cherry mobile has better signal reception than samsung devices. Coz in our place, our samsung phones struggle to get better signal thus, call drops are frequent. While i did not experience dropped calls on my CM phones.

Base on papers, i’ll choose cloudfone. But i need to know its call quality. I know CM coz i previously owned a lot of CM models.

true that. my flare S play holds on to 4g for dear life while my other phones (local and international brands) have long given up hope, while my superion navigator tablet had tge strongest 3g AND gps reception of all my devices. okay din ang CM, if magaling pumili.