For this match, we will take a look at both flagship smartphones from two different brands within the same price range – the Huawei P10 and the Nokia 8. Let us see which smartphone has the upper hand when it comes to specs. Let’s start! 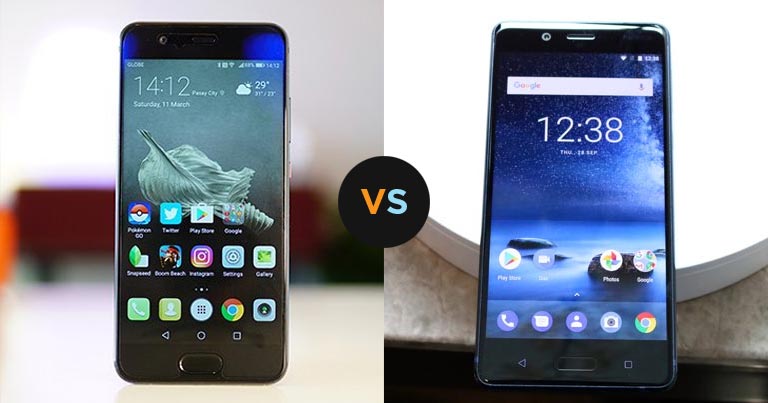 For their screen displays, the Nokia 8 has a bigger screen size and higher screen resolution which equates to 554ppi. The P10, on the other hand, has a 5.1-inch screen size and 1920 x 1080 resolution or equal to 431ppi. While the P10’s pixel density is already great by today’s standards, having a higher PPI is better especially if you’re planning to use it for VR.

If we look at their performance from processors, the Snapdragon 835 of the Nokia 8 gives a better performance compared with the Kirin 960 of the P10. We have not tested the benchmark scores for the Nokia 8, however, the Snapdragon 835 is Qualcomm’s latest flagship chipset and basing this from general benchmarks, it surpasses the Kirin 960 by a significant amount. As for their Graphical Processing Units (GPU), the Adreno 540 of Nokia 8 provides a better gaming potential than the Mali G71MP8 of the P10.

Let us now look at the camera department, With both smartphones offering good camera features and technologies, we could say that this is already a win-win situation for users who plan to buy any of these smartphones just basing from their quality and performance. Huawei P10’s camera proves that it gives an excellent photo quality, check out our sample photos from the smartphone here. For the Nokia 8’s camera, it carries the Carl Zeiss lens which is known for providing good photo qualities since it is being used for professional photography and filmmaking. The Nokia 8 also has a camera mode feature called “Bothfie” which gives users the option to take a photo from their rear and front cameras at the same time. Check out our sample photos from the Nokia 8 here.

For their battery life, the P10 has a slight advantage in terms of capacity but can be a huge factor in battery life. We have tested the P10 and it was able to last for 9 Hours and 15 Minutes using the PC Mark battery test. While we’re yet to test the Nokia 8 we expect it to achieve better, if not similar results while taking to account the Snapdragon 835’s power efficiency. We’re looking forward to reviewing the Nokia 8 soon to confirm this.

The software is also a factor worth considering. While both phones run on Android Nougat, the Nokia 8 has the upper hand considering its pure Android experience with monthly security updates. In fact, the Nokia 8 is already slated to receive Android 8.0 Oreo before the end of the year. The Huawei P10 is also likely to receive Android Oreo but we’re not sure yet when it will arrive.

Both flagship smartphones are worth buying but which one do you prefer? The Huawei P10 or the Nokia 8? Let us know your thoughts in the comments section below.