Apple has officially released iOS 15.1 and iPadOS 15.1, the first major updates to the iOS 15 operating that was released in September 2021. 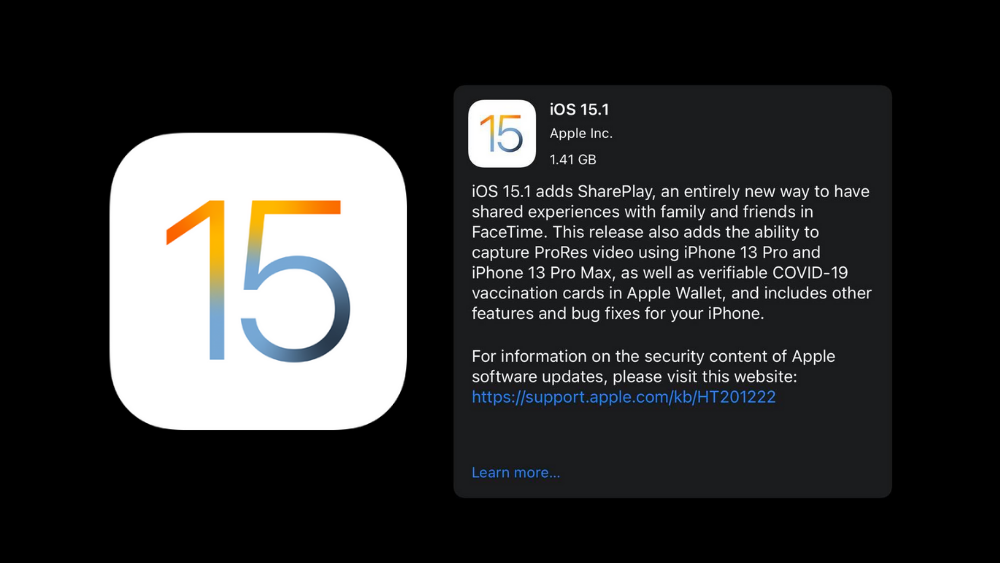 iOS 15.1 includes SharePlay, which is designed to enable users to call their friends and family and interact by watching movies and TV or listening to music together, and it also has a built-in screen-sharing feature.

Moreover, the Camera app also gets notable updates in iOS 15.1 on the iPhone 13 Pro and iPhone 13 Pro Max. This includes support for ProRes video capture as well as disabling automatic camera switching when taking macro photos and videos.

In addition, it also adds verifiable COVID-19 vaccination cards in the Apple Wallet, along with other features and bug fixes for iPhones.

Check out Apple’s full release notes for the iOS 15.1 update below.

• SharePlay
– SharePlay is a new way to share synchronized experiences in FaceTime with content from the Apple TV app, Apple Music, Fitness+, and other supported App Store apps
– Shared controls give everyone the ability to pause, play, rewind or fast forward
– Smart volume automatically lowers the audio of a movie, TV show or song when your friends speak
– Apple TV supports the option to watch the shared video on your big screen while you continue the FaceTime call on iPhone
– Screen sharing lets everyone on a FaceTime call look at photos, browse the web, or help each other out

• Home
– New automation triggers based on the current reading of a HomeKit-enabled humidity, air quality, or light level sensor

• Shortcuts
– New pre-built actions let you overlay text on images or gifs, plus a new collection of games lets you pass the time with Siri

– Photos app may incorrectly report storage is full when importing photos and videos
– Weather app may not show current temperature for My Location, and may display colors of animated backgrounds incorrectly
– Audio playing from an app may pause when locking the screen
– Wallet may unexpectedly quit when using VoiceOver with multiple passes
– Available Wi-Fi networks may not be detected
– Battery algorithms updated on iPhone 12 models to better estimate battery capacity over time

On the iPad, the update adds the above listed features and support for Live Text in the Camera app. With Live Text, the Camera can detect text, phone numbers, addresses, and more, with the feature available on iPads that have an A12 Bionic chip or later. Live Text was already available on the iPhone.