First ever 4DX cinema opens in the Philippines

First ever 4DX cinema opens in the Philippines

Today marks the official opening of the country’s first 4DX cinema over at Bonifacio High Street and it will be showing The Amazing Spider-Man 2 as its starting film. 4DX cinema not only delivers movies through visual and audio like ordinary theatres, but it also involves motion, scents, mist, wind, and more. 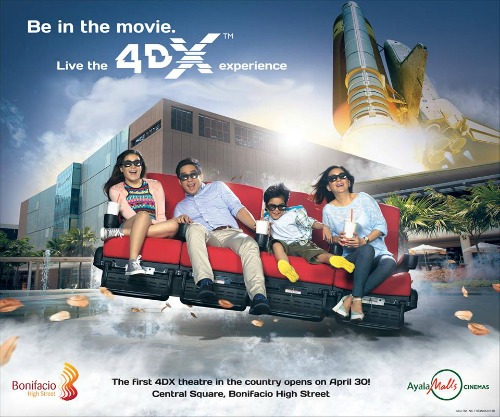 4DX has been commercially-introduced back in 2009 and is owned by South Korea-based CJ 4DPLEX. It is a motion picture technology that aims to tickle all the senses of the viewers while watching, thus making their experiences as immersive as possible.

Elements inside a 4DX cinema include:

Seat motion and vibration
Jets of air or water
Mist
Wind
Strobe lighting
Fog or smoke
Aromatic vapours from a collection of 1000 scents (probably ranging from smell of flowers to stench of garbage, depending on the scene)
Bubbles

As of last month, there are 21 countries that have this technology for cinemas, with Philippines adding to the list. It officially opens today at Central Square Building, Bonifacio High Street and advanced ticket purchases can be done there. If you’re wondering how much a 4DX ticket is, it’s a bit pricier than IMAX at Php450 a pop. To view the full schedule of screening head on over to Ayala Mall’s SureSeats website.