Whatsapp keeps improving its privacy features for its users, starting with last December’s hiding of a user’s online status from a stranger which is in default, now they’re rolling out a feature to let users hide a last seen status and leave a group chat silently. 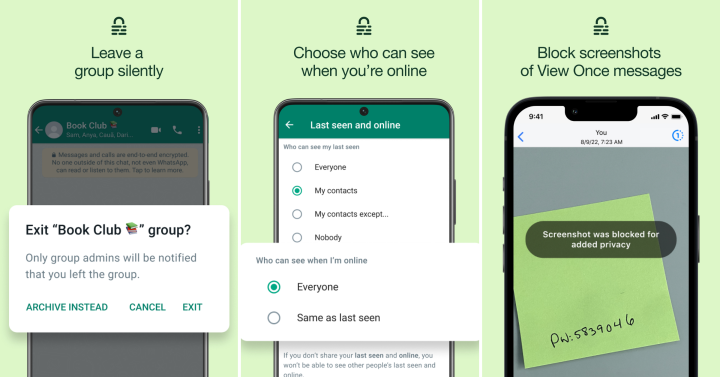 Starting this with the first new feature that lets users choose which of their contacts can see their status. This is the answer to last December’s update where Whatsapp default hid the online status of their users from strangers but it still lets all the contacts of the user see the current status of the person.

Next is to exit a group chat without an awkward notification. As of now, like the Messenger app which is also under Meta, it notifies everyone in the group if someone will leave their chat group and it’ll create an unsettling atmosphere in the group and they’ll send private messages about why this user left the group chat. With this new update, only the admins will get notified if a user will exit a group chat.

Based on Whatsapp, they’ll roll out these new features this month. Whatsapp is also working on a feature that prohibits users from taking a screenshot of a ‘view once’ message. The View Once message is different from Disappearing Messages (also present in Messenger) were after a specific time duration, the message will disappear, unlike the View Once – as the term implies – it’ll go away after the receiver has seen the message once, similar to sending images and videos in Snapchat. The addition of blocking screenshots will prevent users from leaking sensitive information from other people and sharing it with others, intentionally or unintentionally.