Alongside the new iPad Air 2, Apple also unveiled the revamped version of its 7.9-inch tablet which is conveniently called the iPad Mini 3. 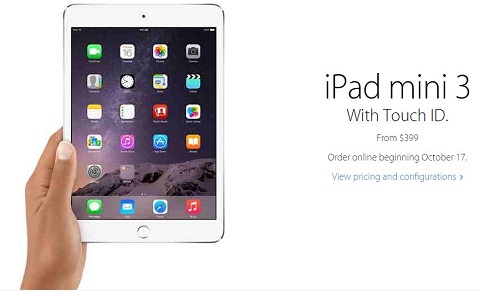 Surprisingly, Apple didn’t spend a lot of time discussing the new features (if there are any) of the new iPad Mini, and instead just quickly ran through some of its feature in one slide.

In fact even the new slate’s official mini-site only highlighted a few “new” things that consumers can look forward to in the new iPad Mini which include the addition of Gold variant in the color choices, the inclusion of the TouchID Sensor on the Home button and the two antennas which supports MIMO technology. To add insult to injury, the new iPad Mini 3 will not run on the new A8X processor unlike its bigger brother. It will, instead, run on the same 64-bit A7 processor found on its predecessor.

The new iPad Mini 3 will be available for pre-order starting tomorrow. The 16GB, Wi-Fi only variant will set you back USD399, $499 for the 32GB model and two hundred dollars more for the 128GB version. The LTE version costs USD130 more, on top of the base price of its non-LTE counterpart.