The Tablet Kings: iPad Air 2 vs iPad Mini 3 vs Nexus 9

The Tablet Kings: iPad Air 2 vs iPad Mini 3 vs Nexus 9

We have had a lot of announcements in the past few days, and that includes the flagship devices of two major companies competing in the tablet space – Google & Apple with the Nexus 9 and the new iPads. We now put them side to side to put everything in scale. 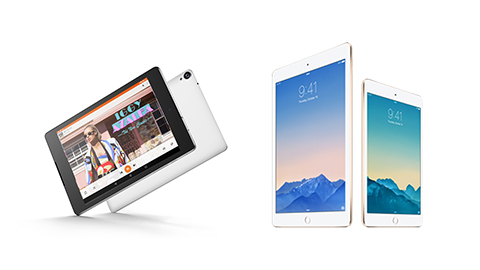 If you look at the sheer numbers of the specs of these devices, we can easily give the crown to the Nexus 9 for having lots of cores for its graphics, a higher CPU clock speed, its 2GB RAM and its higher megapixel front-facing camera resolution – but in reality, higher numbers do not necessarily translate to better performance.

While the screen resolution is similar across devices, the sizes aren’t: the iPad Air 2 is the largest and the thinnest, the Mini 3 is the smallest and the Nexus 9 sits right in the middle, also being the thickest by a small margin. In terms of storage options on the other hand, there are more variants going in favor of the new iPads. However, at $399, the Nexus 9 is basically competing with year-old hardware in the iPad Mini 3, so in that case – the bang for the buck goes to the Nexus 9, unless Touch ID is of extreme importance to you.

While we’re still not convinced you should take photos with your tablet, these new devices offer improved optics and camera features – which will have to be tested first before deciding which is better.

On top of everything, especially your preference for tablet sizes, this is where the never ending argument of which OS is better comes in – Android 5.0 Lollipop or iOS 8.1? These are truly the things that set these tablets apart regardless of specs as it also brings in the companies’ ecosystems into play.

What do you guys think? Leave your thoughts in the comment section down below.