In addition to the Zenbook 3, ASUS also launched the portable and Intel-powered Transformer 3 two-in-one PC. This is the sibling to the beefier Transformer 3 Pro that was launched altogether at Computex 2016 which is on its last day today. 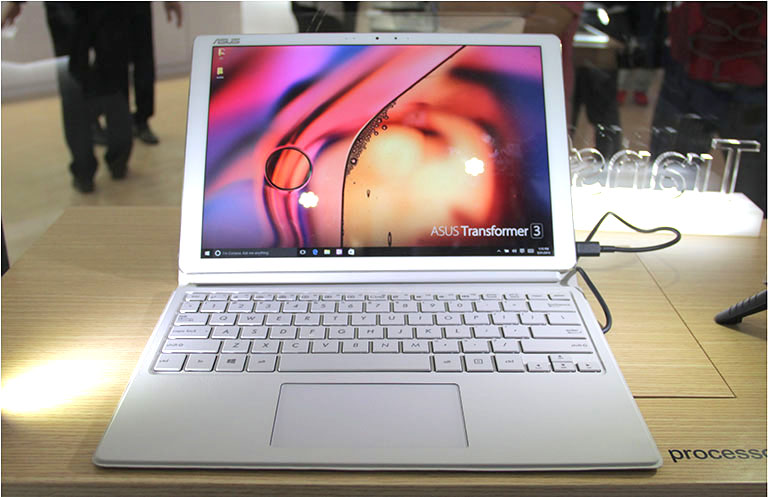 From the first moment we laid eyes on it, the Transformer 3 reminded us of Microsoft’s Surface tablets due to the whole package that it comes with.

The Transformer 3 touts a 12.6-inch display that houses its 2880 x 1920 resolution panel. It is surrounded by a noticeably thick white bezel which is then accentuated by the same chrome trimmings seen on the Zenfone Ultra. 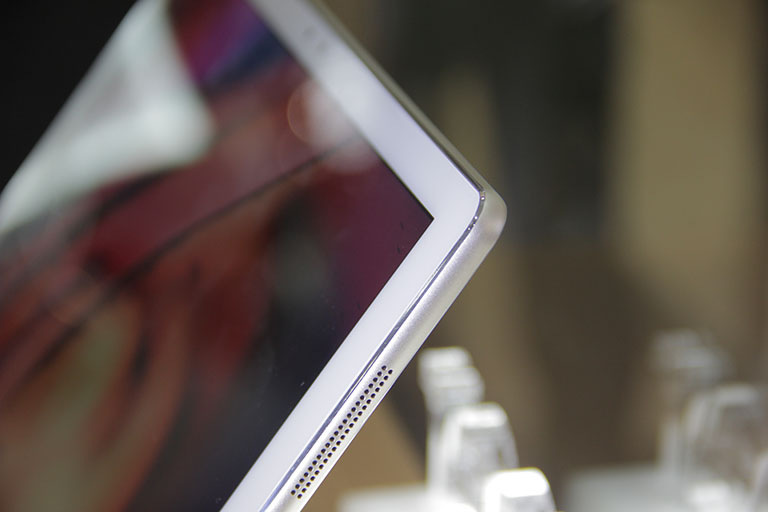 The corners are rounded which makes it easy for the palms when you remove it from its keyboard and use it as a tablet. Because of this frame, the device really felt solid on the hands. 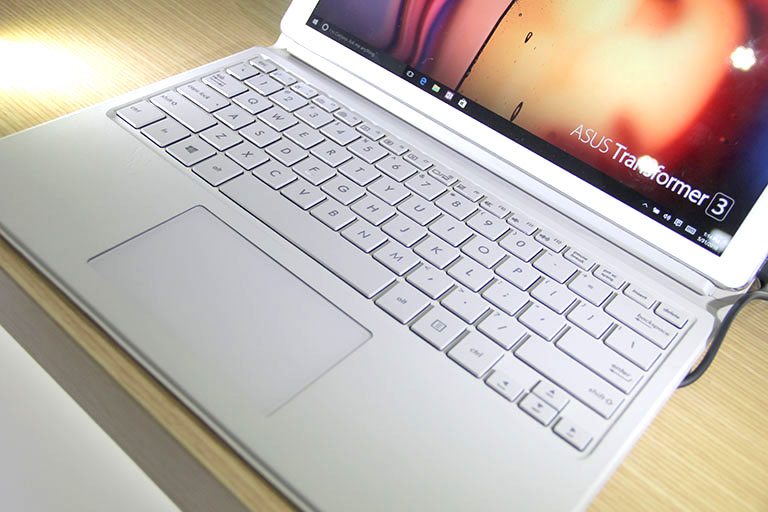 The package includes a keyboard to be able to use it as a laptop for when you have work to finish out of the house. The keys are somewhat packed tight but we tried typing for a few moments and we could still type fast without any discomfort — as for using it continuously for hours, we’re still not sure as of yet. 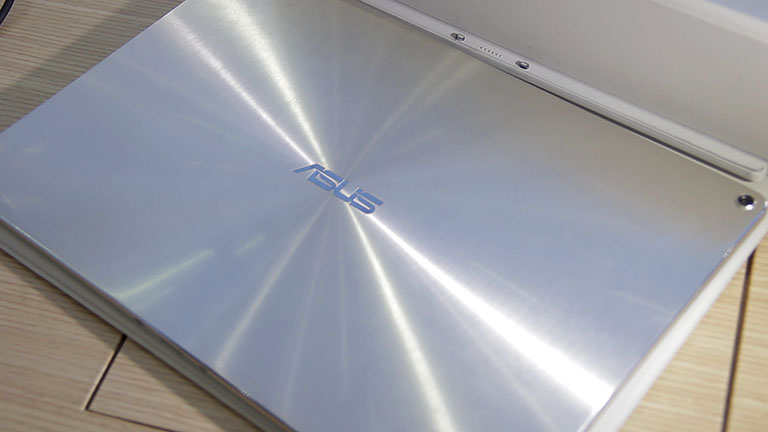 The entire aluminum alloy chassis reflects yet again the company’s concentric circle design. The center of the design is emblazoned with the company’s logo which, in turn, makes it look like there is a sort of radiance emanating from the logo however the light reflects on the entire back plate. 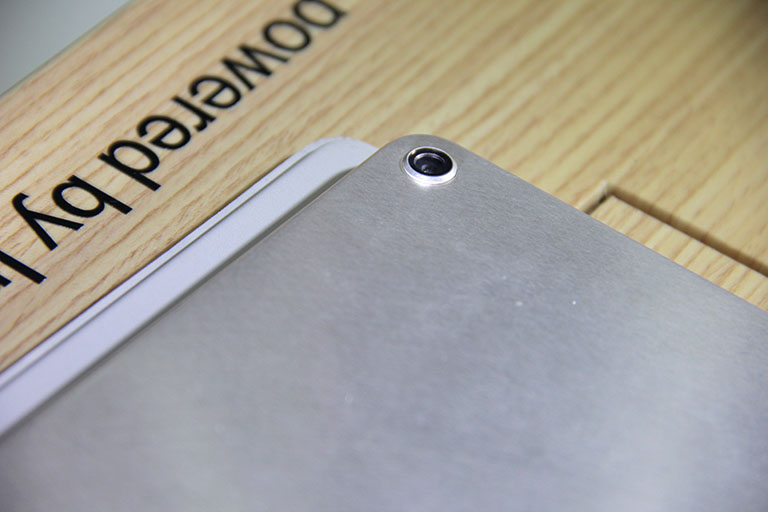 The only component visible on the back is its 13-megapixel camera at the corner-most edge of the Transformer 3. Just like the Zenfone Ultra, the main shooter is placed in a protruding circular housing. 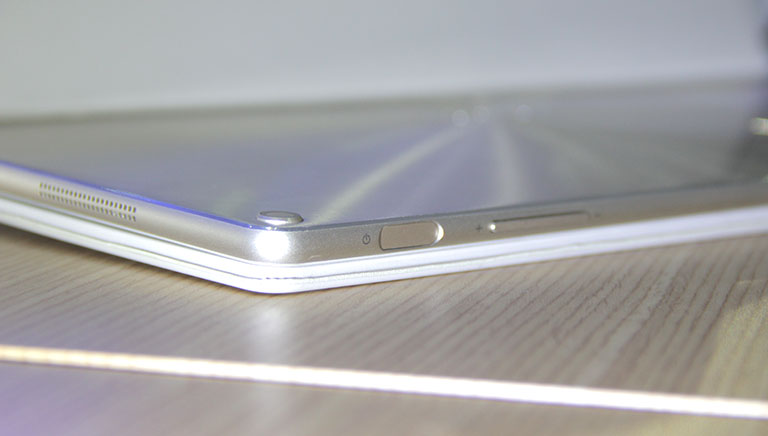 Up top, there’s the built-in fingerprint sensor for an added layer of securing access to the device and the volume rocker is seen right beside it. 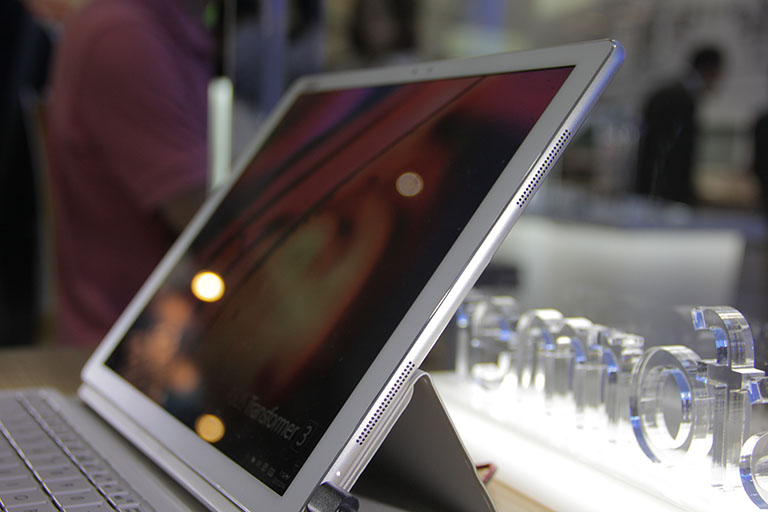 The device sports a 4-piece Harman Kardon speakers located at both ends of the tablet on landscape mode. The grilles indicate two of each on both sides to better scatter the sound. This is generally good, although we noticed that users have a tendency to cover some parts of the grille when they hold it up and use it as a tablet. 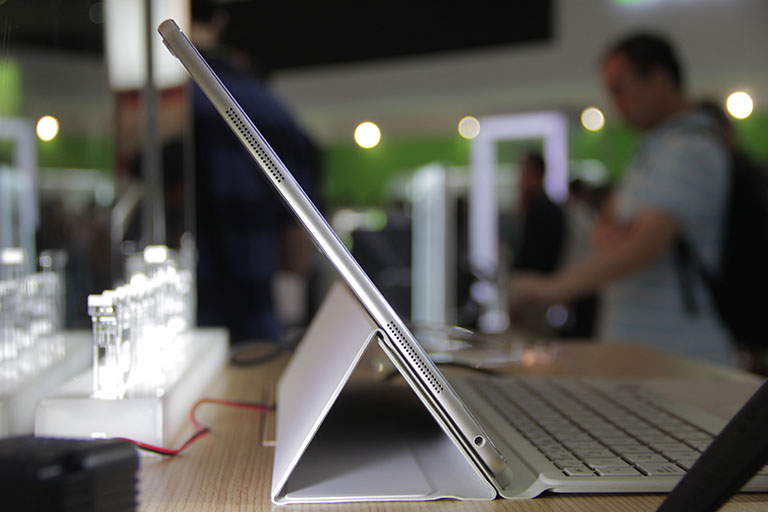 The Transformer 3 is thinner than the Transformer 3 Pro with its 6.9mm profile (vs 8.35mm). Also seen here is the headset connectivity port for connecting your headphones. 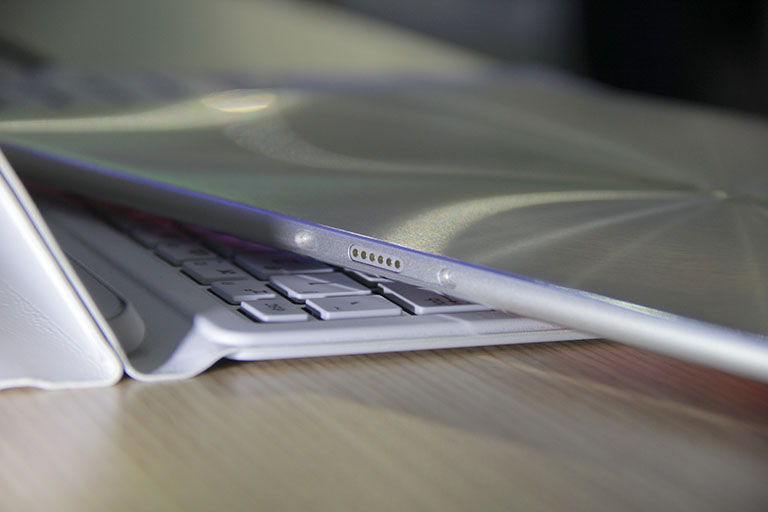 The tablet turns into a laptop as soon as the metallic pins snap to the keyboard. We’ve tried taking it out and snapping it back again and it seemed like the tablet maintains a sturdy connection to the dock once it attaches.

So far, we like how the Transformer 3 is well-built although we’re not big fans of the limited position its kickstand offers.

Although for those quick instances that users need to finish something while on-the-go, it seems like the Transformer 3 is more than capable of doing just that as it carries capable internals like a 7th-gen Intel core processor, 512GB SSD, and up to 8GB of RAM.