Announced back in December, the HP Folio 1020 is the company’s first ultrabook that runs on Intel Core M and geared towards the more corporate consumers. Check out our full review after the break.

A new breed of laptops have been emerging as typical ultrabooks have evenly saturated the market for the last couple of years. This category is defined by the processor they carry — specifically the Intel Core M chip.

We’ve seen the likes of the Transformer Book T300 Chi and the Zenbook UX305 running on the Core M processor and both have a very slim profile brought about by the fanless design benefits of Core M. 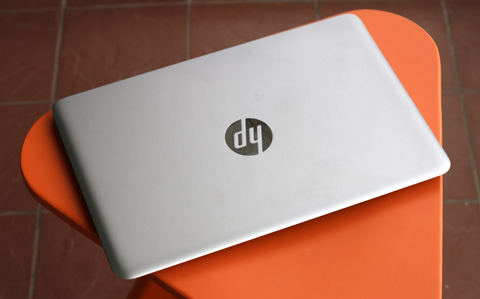 Dressed in an ultra-thin body with weight that can almost match that of the Apple MacBook Air at 1.2 kg, the Folio 1020 sports a high resolution 12.5-inch diagonal Quad HD (QHD) display, 8GB of RAM and an SSD with a 512GB capacity. That’s a pretty impressive configuration for an ultrabook where 4GB RAM and 256GB SSD is usually the norm.

HP claims the Folio 1020 is the world’s thinnest and lightest notebok when it was announced and perhaps, there is some truth in that. The Folio 1020 has got that Macbook vibe to it especially with the matte silver-gray finish in a clam-shell design. From the outside, it’s very minimal and subdued with only the circular logo of HP etched at the center. 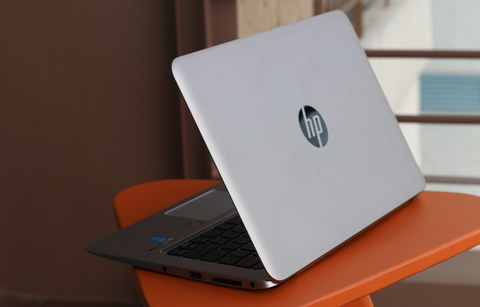 Despite the small and compact design, HP managed to put a lot of ports and an expansion slot on the Folio 1020 — there are two USB 3.0 ports, an HDMI port, microSD card reader, 3.5mm audio and mic port, and an expansion port that when attached to the extension dongle can serve up VGA and LAN connections. 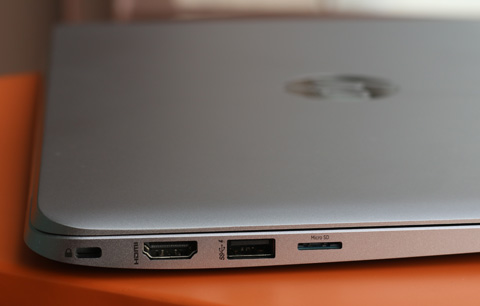 The Folio 1020 is compatible with the HP 2013 UltraSlim Docking Station to extend the capability of the laptop (there are slots at the underside to fit into the dock).

We were surprised to learn that HP uses a new trackpad design called ForcePad which is a pressure-sensitive multitouch trackpad that is very much similar to the Force Touch of the new Macbook. It takes a bit of practice to get to used to the trackpad that does not have those old clickable areas on the bottom corners to indicate an action. 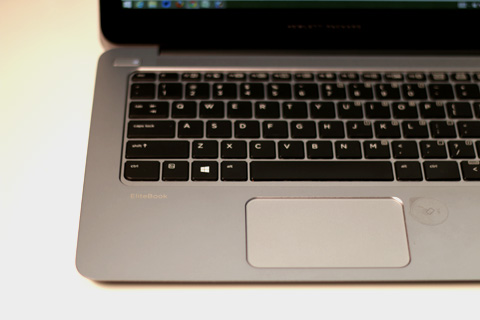 On top of these, the Folio 1020 also comes with a built-in NFC for quick pairing with 3rd-party accessories and a fingerprint scanner for added security (like password-less logging to Windows 8). 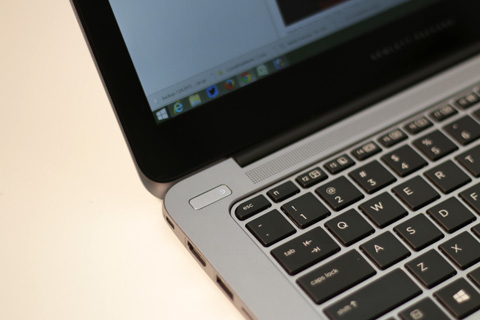 The keyboard on the Folio 1020 comes with a chiclet-type keys that’s a bit smaller than usual though they’re much like the ones found in the Macbook line. They’re easy to type with, has enough travel and flex although we think HP could have used more of the real estate for the keyboard. 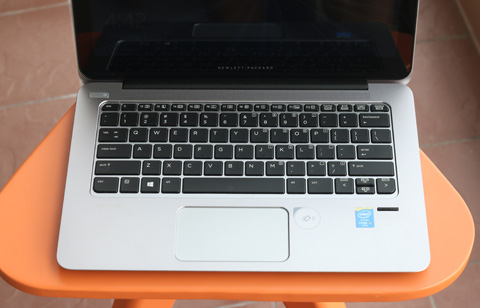 The Folio 1020 has one of the nicest keyboard and trackpad combo we’ve seen in most ultrabooks lately and though the ForcePad implementation can be a bit awkward at times, we believe it will be just a matter of time and we’ll be using it like it’s second-nature.

Inside is a 12.-5 inch IPS LCD display with a QHD resolution (2560×1440 pixels) in a bright and crisp edge-to-edge glass panel with multi-touch capability. 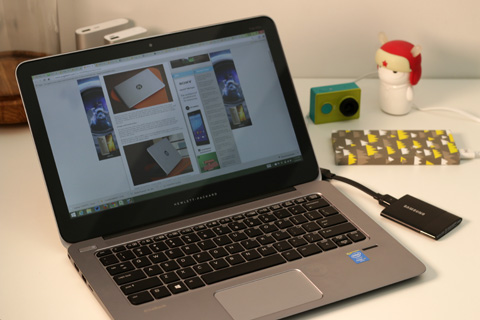 That goes without saying that the display on the Folio 1020 stands out with its crisp and clear IPS display as the glass panel runs from edge to edge. 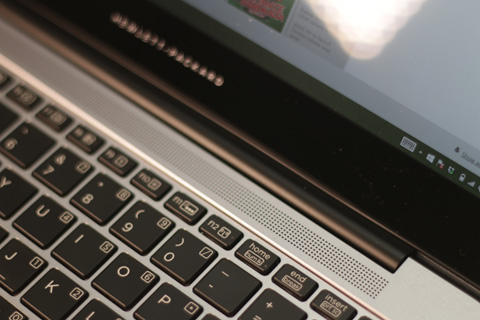 The speakers run along the top side of the keyboard which is the best place to put it. Speaker volume is pretty loud and gets a bit of help from the lid that bounces the sound forward, towards the user.

The Folio 1020 is powered by an Intel Core M running at a base clock speed of 1.2GHz but can boost the speed up to 2.9GHz when needed. HP paired with with a generous 8GB of RAM. While even more powerful ultrabooks only have 4GB, the 8GB memory helps keep up with multi-tasking and heavy applications like Photoshop. 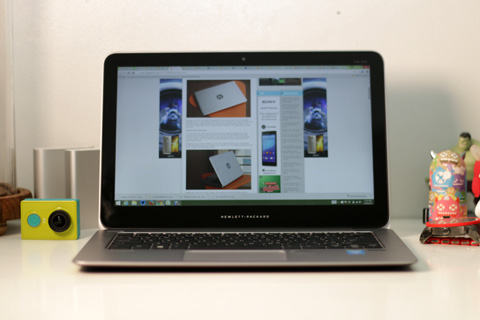 The 5Y71 uses the latest 14nm process and runs at a base clock of 1.2GHz (dual-core, 4 threads) but can boost to speeds up to 2.9GHz. It has a low-power consumption of just 4.5W which is much lower compared to a 5th-gen Intel i3-5020U at 15W but with comparable performance. This means you will get your required power when you need it yet still be able to reduce power consumption.

The laptop also includes a few security tools such as a fingerprint reader, HP’s Sure Start self-healing BIOS, and other protocols to ensure the safety of the device and the data inside it. The device is also said to have passed rigorous military-grade tests which include drops, shocks, and exposure to extremes of temperature and humidity, and high pressure testing. 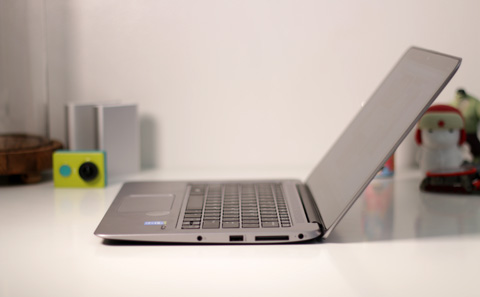 The problem with Intel Core M is that the fanless design will oftentimes drive the device temperature above normal and eventually forces the processor to throttle down that affects performance.

We noticed this while playing DotA where the game often freezes in the middle of the game, most probably due to the CPU throttling down every now and then thereby reducing overall performance.

To remedy this, we set the system mode to Moderate and Power Saver Mode. That fixed the heating problem allowing for a smoother gameplay under a lower system temperature. We also noticed this with the Transformer Book T300 Chi so it’s pretty much an issue with the fan-less design and the Core M processor.

The Core M promise is something that has yet to be really tested and proven as more and more laptops, tablets or hybrids are released into the market. Early results on several devices showed not that significant difference, including the last one we reviewed (Transformer Book T300 Chi).

Thus, we were a bit wary of the possible battery performance of the Folio 1020. Suffice it to say, we were not disappointed. 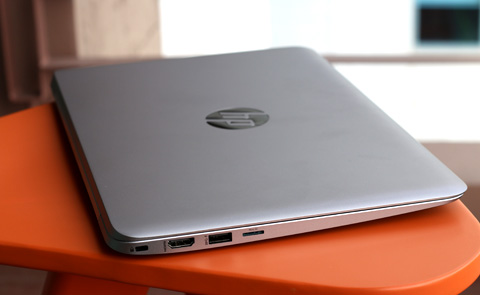 The lower power consumption of the Core M chip likewise proved to be an advantage when it comes to battery life. On moderate to heavy use, we manage to get around 4 to 5 hours on a single full charge. In power saving mode and only running on office productivity app such as MS Office or Excel, we managed to get as much as 8.5 hours. It’s nothing impressive, especially if you look at the performance of recent models of the Macbook Air but for a Windows machine, this is already very good.

The HP Folio 1020 is positioned to be a business-oriented ultra mobile laptop and it’s exactly what its offering with the Folio 1020. It’s beautiful, sleek and the impressive build quality makes the Folio 1020 a looker with additional bells and whistles on the side.

The small compact size is packed with a pretty convincing set of internals. Granted that Intel Core M might not really appeal to those who seek better performance than your typical Core i5 ultrabooks, the trade-off in terms of battery life somewhat is justified.

The Folio 1020 retails for around USD$1,600 (our unit’s configuration) and available in HP’s online store.

What we did not like:
* Quite expensive
* A bit under-powered