Over at New York City, Microsoft has announced the successor to its flagship tablet from last year, the 2nd-gen Microsoft Surface Pro. 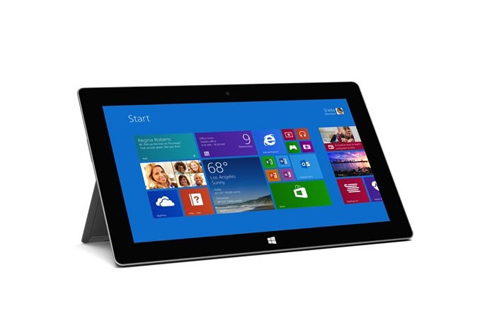 The 2nd-gen MS Surface tablets basically look the same on the outside, wrapped around in Microsoft’s magnesium casing. The Windows logo on the back is now gone, and the word ‘Surface‘ takes its place. The kickstand now goes farther as well, aiming to be able to go over your lap.

Basically, everything is better without much aesthetic change. With the Surface Pro 2, Microsoft claims that the 10.6-inch display and the speakers are a lot better, speed is at least 20% faster, graphics performance has improved by 50% and battery life by 75%. This is all probably thanks to the work of Intel’s 4th-generation CPUs – Haswell.

Another story is the availability of so much accessories. There’s a Power Cover that adds a 30wh battery to the device, a docking station that adds a load of USB ports, ethernet & such, a Type Cover 2 & Touch Cover 2 which are the same ones from last year but thinner, with more colors & now backlit, and there’s a Music Cover.

The Surface Pro 2 will retail for $899 (Php39k converted), and along with the Surface 2, it will be available on October 22 in the US. No word on local availability yet.

We will update this article once we get more info on the specs.

Hi, when will it release in the phil? I want it, thanks

it seems really great, its just the price thats killer, 64GB is not enough , most people are buying 8GB of ram with 256GB ssd as standard now days and its costly for this.

this (512GB) plus iphone 5s! all premium quality hardware. plus software that we’re familiar with. mobile solutions at its best.

Great for those that need MS Office. Still too thick and clunky looking though, and the continued need for a cooling fan is probably why it looks the way it does. This requires an IGZO screen and a fanless cpu to be thinner, thus making it a truly compelling corporate product.