Following the announcement of its new flagship desktop APU, AMD has launched three (3) processors under the Carrizo family namely the FX-8800P, A10-7800P and A8-8600P. AMD has improved on all aspects of their new Accelerated Processing Units (APUs) from the previous generation, which is, in large part, credited to the use of new “Excavator” processing cores and 3rd Generation Graphics Next Core 1.2 (GCN 1.2) architecture.

The Excavator cores and GCN 1.2, along with other new improvements, allow the AMD 6th Generation A-series processors to deliver smoother gaming experience which is claimed to be at par with the A10 Kaveri desktop APUs, but with significantly power consumption. 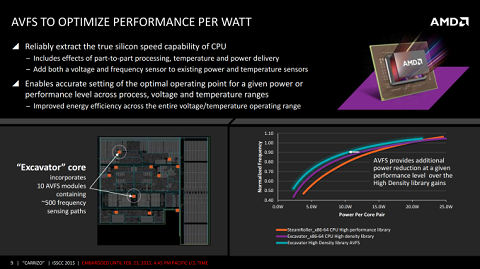 Speaking of power consumption, AMD boasts that the each of the 4 Excavator cores found on the new Carrizo APUs are features ten (10) Automatic Voltage/Frequency Sensors (AVFS) that monitor the core’s temperature and the amount of instructions being handled at a certain time. It then regulates the amount of power that needs to be fed to the processor to handle the instruction set which, in theory, should result to better battery life without sacrificing performance.

In addition to ten (10) AVFS, the processing cores of the new Carrizo APUs are equipped with ten (10) power planes. Together with the S0i3 power state, these power planes can achieve the same power level of “Standby” mode, but with the benefit of being able to wake the system in under a second like in Sleep mode. 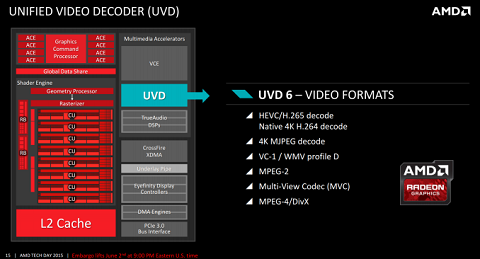 AMD has also made notable strides in the video decoding and playback departments which allow Carrizo APUs to handle videos with better efficiency and lesser power draw. This is credited to the integration of Unified Video Decoder 6 (UVD 6) which also enables the new laptop APUs to handle 4K contents along with other formats listed above.

The company is eyeing the mainstream laptop market with the new Carrizo APUs, particularly notebook PCs in the $400 – $700 range. During the launch, AMD named OEM partners like Asus, Dell and HP that are expected to launch the first wave of Carrizo-powered notebooks starting this month.