Not to be outdone by Asus, Samsung Philippines also unveiled their latest Windows 8 PC offering yesterday. One of their new offerings is the ATIV Smart PC which we first featured back in August even before Microsoft formally announced their new OS.

At the core of this Windows 8 Convertible Tablet PC is an Intel Atom Z2760 processor with 2GB LPDDR2 RAM and 128GB SSD. The company also equipped the bad boy with pair of snapper; 8MP on the rear and 2MP on the front. 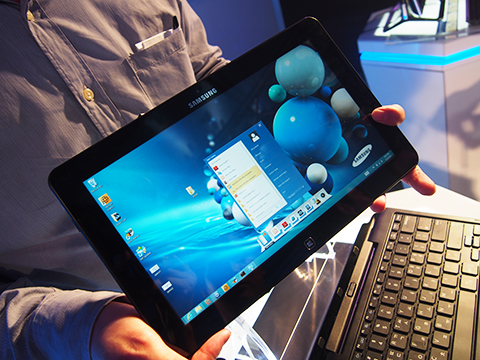 To ensure maximum productivity and creativity, Samsung bundled the ATIV Smart PC with a keyboard dock and a Wacom Digitizer S-Pen which has 1024K pressure sensitivity. The stylus is paired with Samsung’s proprietary S-Note app similar to the one found on the Galaxy Note.

Here’s a short clip of our hands-on with the Samsung ATIV Smart PC:

The Samsung ATIV Smart PC sports a handful of ports including a USB 3.0, mHDMI, Audio jack and micro-SD slot. The keyboard dock adds two more USB 2.0 ports to its arsenal.

Samsung is also offering a higher spec’ed model of this device called ATIV Smart PC Pro. This version has an Ivy Bridge Core i5 processor with 4GB DDR3 RAM and 256GB SSD configuration. Instead of HD display, the company equipped the PC Pro with a Full HD PLS Type screen with 400 nit brightness. If you look at the specs below, you’ll notice that the ATIV Smart PC Pro has gained few millimeters and a bit of heft because of its added features. In addition, the battery life was significantly less compared to its modestly spec’ed counterpart.

The Samsung ATIV Smart PC and the Smart PC Pro will be available next month and will retail for Php35,900 and Php59,900 respectively.