Samsung Galaxy Note 8.0 in the flesh

Officially announced just 3 days ago, Samsung showed us their new Galaxy Note 8.0 in a regional event here in Jakarta, Indonesia. Check out our hands-on impressions after the break. 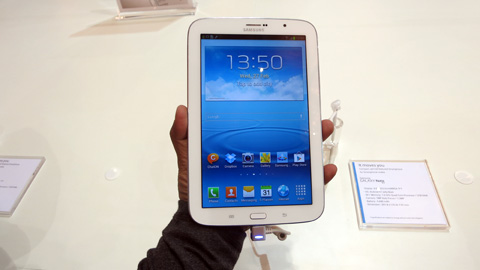 The shape and feel of the tablet is actually closer to the Note 2 than the Note 10.1 with all that curves and glossy finish. The tapered edges gives it a perception that it’s very thin but we couldn’t shake the fact that it’s just 7.95mm only (feels a bit thicker to me).

The TouchWiz UI is very familiar and instead of just 4 icons per row, the Note .80 was able to squeeze in 6 icons so they look more proportionate to the size of the tablet.

The Note 8.0 has pretty good hardware specifications although we felt they cut some corners here like the HD display. We suspect that Samsung is going to pit this against the iPad Mini so the slightly controlled maneuver on the specs will still beat the latter on paper and manage to inch pretty close to same the retail price. Samsung did not indicate when they will release the Galaxy Note 8.0 in the Philippines nor its retail price but our earlier reports point it to around Php16k to Php17k.

Yuck to all apple products. If you own an apple product, then i bet one way or the other you would wish your gadget could do simple things and make life easier but they just don’t. Note 8 will definitely sell in the philippines. Ipad mini is a nice looking piece of crap. Kung alam nyo lang talaga, ang hirap kaya gamitin ng ipads and iphones which are so pc dependent. May pa iphone 5 iphone 5 pa, wala namang desktop o laptop hahhaha saan kaya sila nagsisync ng itunes to update their playlist? Sa piso piso internet cafe? Hahahhaha

troll, look at the price of the piece of junk 24k? with thousand of apps not compatible to 8 inches. yeah buy one then slam it to your head.

24k only for this gadget? I expected 30k. im not trolling about apple products especially the ipad and the iphones. they are just useless. note 8 shouldn’t even be compared to ipad mini coz note 8 is a phablet. ipad mini is just a tablet.

Youre so cool! I dont suppose Ive read something like this ahead of. So nice to come across somebody with some original thoughts on this subject. realy thank you for starting this up. this web-site is something which is needed on the internet, a person having a little originality. valuable job for bringing some thing new to the net!

Anyway, this tablet’s resolution is another disappointment. Only 189 ppi.

@Anti_Kimchi: hahahaha you are entertaining.. I know what you mean abt koreans. They are buying up Cebu and then making the shops exclusively for koreans. No Cebuanos allowed..

Why is the note 2 so expensive?

Because they can. Because dummies will pay the high price for shinny, crappy plastic!

It does look odd seeing ppl taking pics with a big tab, but if enough ppl did it it wouldn’t be strange any longer. It would be the norm. Kind-a-like the morons watching the STOOPID Korean asshole psy. Anti_kimchi=anti_koreans. Ahhhh. The Philippines. No hate crimes here.

It’s a tablet. You hold it differently from a smaller device so you need bigger bezels.

Might be a minor thing to some, but I was disappointed that the camera doesn’t have an LED flash. The Note 10.1 has a flash. So I’m wondering why Samsung sacrificed the flash on the Note 8.0

Why? Are you one of those people that takes pictures with their tablet in public? I hope you know how stupid that looks.

lolwut – Why? Are you one of those people who are judgmental of those whose opinions run contrary to yours? I hope you know how idiotic that looks.

And you didn’t even get the context of the post. Point is you are marketing this as a different size/version of a previous model. So why not port over all specs as well to the note 8.0.

@lolwut: Agree! Those people who take pictures with their tablet in public look ridiculous.

if may capabilities ito na phone and the price is just around 16k…this is a big steal…and I might prefer this over ipad mini.

In spite of the ridiculous childish design, it will still sell because it’s still quite a steal compared to the iPad mini due to the higher resolution and mobile connecticity (3G/HSDPA) at a lower price. The design is the real letdown here.

I think this is not going to sell here in Ph. I mean it’s a fail attempt to compete with the iPad. Don’t get me wrong, I like Samsung and I have some of their products, but making a product so as to counter an Apple device to me equates to attention whoring. Besides there are several other brands that are cheaper.

Attention whoring as in competition? The Galaxy Note 8.0 will definitely sell here. Samsung Philippines recently promoted it on their Facebook page.

I have a Galaxy Tab 2 7.0 and is a pretty good device for the price. Definitely not interested with the Note 8.0 since it has a disappointing screen.

But the Note 8.0 has a nice stylus and has plenty of good TouchWiz features like the multiwindow and Samsung Dive. That combined with the Exynos processor are enough premiums that make it worth the cheaper brands.

Your logic failed you, Mr. lolwut.

If Samsung would price this at between P12k & P14k, it would be a huge hit in the Philippines, bcoz that would then become affordable to many students — this device’s biggest target market.

As for the Ipad Mini, I own one at the moment and I barely use it. I have problems with compatibility and it’s very frustrating. I think the Note 8.0 will be quite useful bcoz of the S Pen, which seems user friendly. I just hope this comes out before classes would end this month.

What makes a note II expensive?

Please update when and where