We’ve finally received a review unit of the Samsung Galaxy Tab 7.7 P6800 which was launched last Saturday and I’d like to share some photos and my initial impressions.

We’ve seen the previous Galaxy Tab in various sizes — the 7.0 Plus, the 8.9 and the 10.1 but the Tab 7.7 does not share a lot of the exterior features. It’s more like a close cousin rather than a sibling. 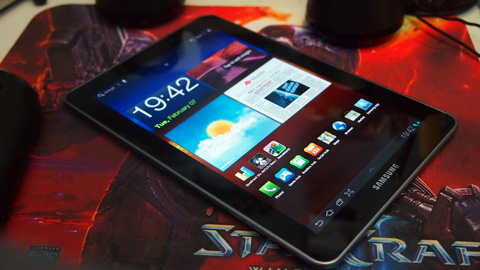 The Size and Profile. The Galaxy Tab 7.7 is definitely the thinnest tablet we’ve ever seen and used. Most of the tablets we’ve used before feels thin — the iPad 2, the Transformer Prime, the Galaxy Tab 7.0 Plus and even the Galaxy Note — because of the tapered edges.

However, the Galaxy Tab 7.7 does not pretend to be thin because of those tapered edges but because it is indeed thin even at the center. You can just feel it when you hold the tablet. 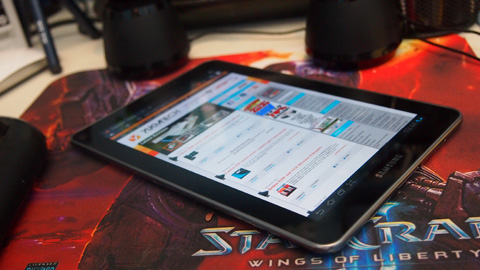 At 7.9mm, it’s thinner than the SGS2, the Galaxy Note and the iPhone 4. Now that tells a lot about how good the profile of this tablet.

Before booting up the tablet, you will also notice the thin, black bezel. The screen is pretty close to the edges on all sides. 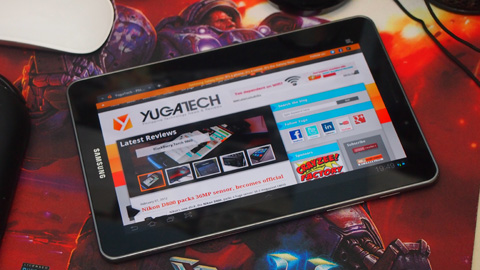 Super AMOLED display on a tablet. The Samsung Galaxy Tab 7.7’s claim to fame is its Super AMOLED Plus display. It’s pretty popular among the smartphones but it’s the first time to be used on a tablet.

I must admit that the screen is just brilliant — its got a rich vibrant color, great contrast and impressive depth.

Add to the fact that the resolution is 1280×800 pixels on a 7.7-inch display, the crispness and clarity is just good. At 196ppi, it is among the highest in a tablet (beaten only by the Huawei MediaPad which is at 217ppi). 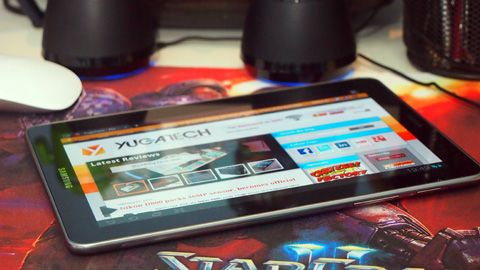 To give you a better perspective on how bright the screen is, we placed it side by side the Galaxy Tab 7.0 Plus.

Both tablets were set a full 100% screen brightness. You can clearly see the difference between the two here. 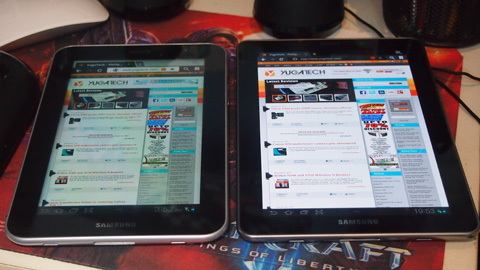 The tablet comes with an impressive set of specs — a configuration that closely matches the Samsung Galaxy Note.

Would have been totally complete had Samsung managed to have Android 4.0 Ice Cream Sandwich installed out of the box. 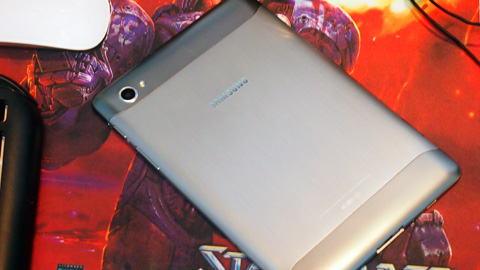 The back panel is not your usual glossy, pearl-white plastic cover that we’re all too familiar with the other Galaxy Tabs that came out earlier.

To give it a premium finish, the back cover is made of a two-toned aluminum with a brushed-metal finish. 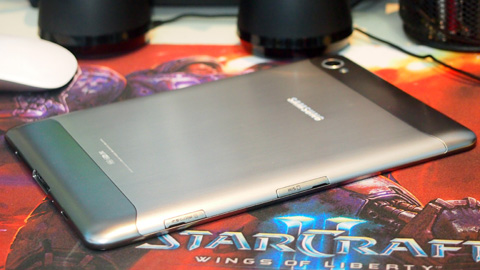 The SIM card slot is found on the left side of the tablet, along with the microSD card slot. On the right side, there power button and volume controls are placed.

At the top is the 3.5mm audio port and at the bottom are a couple of speakers along with the USB charging port. 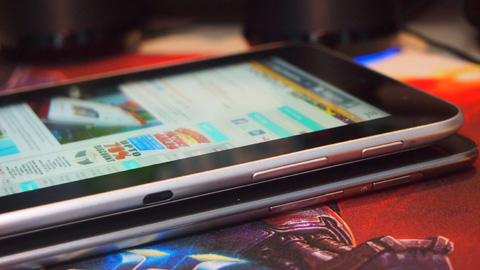 Unlike our Galaxy Tab 7.0 Plus that came with an IR blaster, the Galaxy Tab 7.7 doesn’t have one. I am told that all Galaxy Tabs that will be sold in the Philippines will not have the IR port so that settles it. 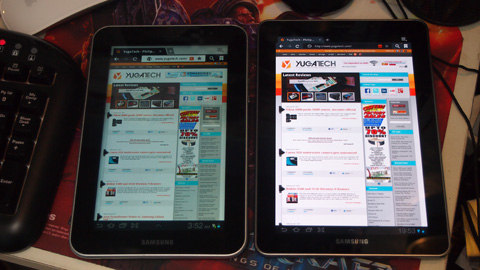 Will have to take this tablet for a spin first but for the most part, if you’ve read out review of the Galaxy Tab 7.0 Plus, just add the part on the Super AMOLED screen and we’re all done.

Disclosure: Widget City provided us with this review unit. You can check out the Galaxy Tab 7.7 in their stores which is selling for Php28,200.

Oh no, I mistakenly anchored the link, here’s the CORRECT ONE

newbie question: do tablets support java? if pwede how?

Yung weakness lang ng Tab7.7 is aside from the spotty backs ( in a dark room using it as an ebook reader ) is the relatively weaker white brightness compare to a Galaxy Note or even the Galaxy S. Im not sure if this is a design decision by Samsung to compensate for the screen size but at 100% brightness its white levels are not any better than a Note/S1 at 50%

This is both good and bad, good because it can potentially use lesser power and becomes even dimmer in a dark place, bad is when you use this out doors or in a well lit area, the whites may seem washed out or yellowish..

Also another big down fall for is the added ‘aggressive’ mDINE sharpening they use.. which is also on the Tab 7Plus, 8.9 and 10.1 just look at people images and notice the over sharpening effect, it actually ruins a lot of images but in turn it makes some images better.

This seems like a great Android tablet but I’m already well satisfied with my Transformer Prime. :)

Is there a chance that an SG-tab 7.7 wifi only model is sold here? I want a tab but not with phone capabilities, IMO, it just adds to the high price.

The Engadget review is mostly spot on except for the Quadrant score. I got over 4k consistently on it.

I was about to buy the TFP, but upon trying out the 7.7 on a whim, I couldnt put it down. The TFP felt like I was touching a kitchen sink in comparison. Battery life is PHENOMINAL and the build is HTC like.

FYI for those interested, I got mine at Fortress HK 2 weeks ago for 4088HK or around Php 23k 16GB WiFi only.

purchased this last jan 13 in greenhills for P31K. great buy. here is the link for the engadget review:
http://www.engadget.com/2012/02/07/samsung-galaxy-tab-7-7-review-international-edition/

I biught this for myself after Christmas. Soooooo worth it. And Engadget posted a review about it. Bested the iPad 2’s battery life by around 2 hours. Awesome.

will wait for the price to go down a bit :)