The Xiaomi Mi Pad was first announced back in May 2014. It features a 7.9-inch high-resolution display, powerful NVIDIA Tegra K1 quad-core processor, and an affordable price tag that caused a lot of excitement. A year later, the highly-anticipated slate is finally in the PH but is it still a worthy consideration? Let’s find out by reading our full review. 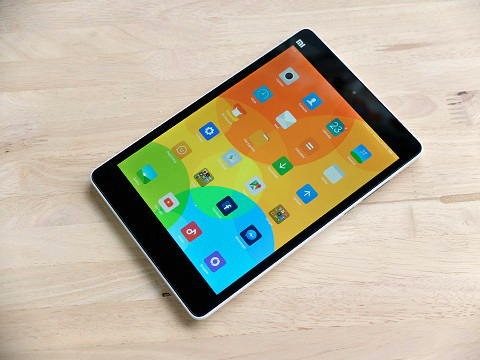 The Mi Pad was among the very first device that features the rare Tegra K1 chip so we’re pretty curious at how it performs.

The Mi Pad is a simple yet clean-looking slate that boasts a 7.9-inch display. Situated above it is the 5 megapixel front camera, notifications light, and the Mi branding. Found below are three illuminated capacitive buttons for Recent Apps, Home, and Back. 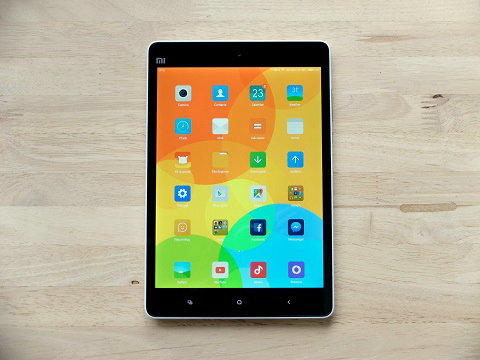 At the right side are the plastic volume rocker and the power/lock button with chrome finish. Found on the left side is the tray for the microSD card. The top part houses the headset jack, while down at the bottom is the microUSB port for charging and USB OTG. Flip it on its back and you will see the 8 megapixel camera, two pinholes for the microphone, Mi branding, and two speaker grills. The rear part is made of glossy plastic with unibody design that reminds us of the iPhone 5C. 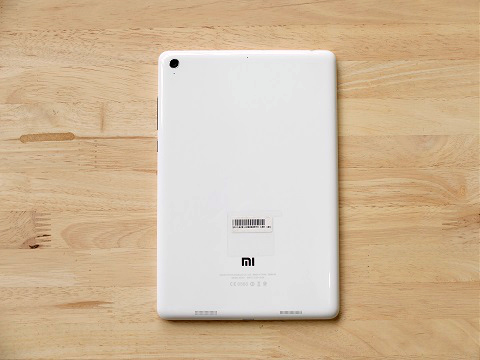 On hand, the Mi Pad feels solid and sturdy, however, it eventually becomes uncomfortable to hold as the glossy body becomes slippery when it has accumulated so much fingerprint and sweat from your hands. 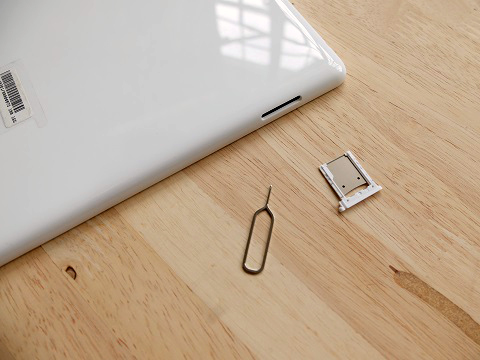 Another thing that makes it uncomfortable is its weight. Although made of plastic, it is hefty at 360g, heavier than the metal-clad Apple iPad Mini 3 (331g) and the Samsung Galaxy Tab S 8.4 (298g). Not to mention it is also the chunkiest of the three at 8.5mm. 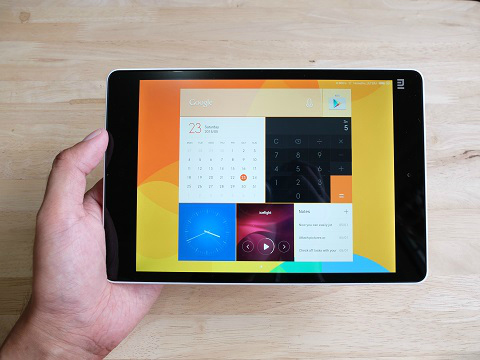 The display is one of the strongest suits of the Mi Pad. It has a wide 7.9-inch IPS display with 2048 x 1536 resolution or 324ppi, same as the iPad mini 3, and protected by Corning’s Gorilla Glass 3. The display is bright, vibrant and crispt with good colors. Viewing angles are good as well, however, it’s ruined by fingerprints and smudges as it is very prone to it. Given the display size, the Mi Pad should satisfy those who want a good viewing experience on a tablet. Its great for viewing websites and e-books both in portrait and landscape. It’s also good for watching movies, however, the 4:3 aspect ratio might irk some as most videos would appear with black borders at the top and bottom by default. You may stretch it on some video players to fill the borders but the result may not always look good. 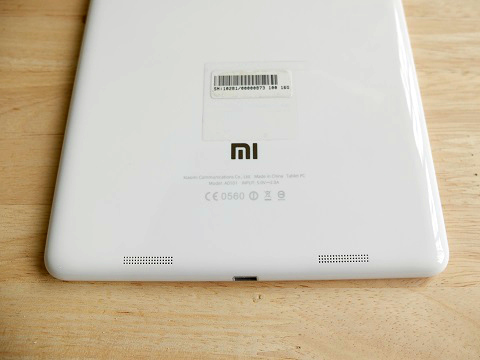 The dual speakers at the back, on the other hand, provide good sounds with ample loudness, bass and clarity. So even if you don’t have your headphones with you, the Mi Pad’s speakers will suffice for your private listening.

Running the software side of the Mi Pad is Android 4.4.4 KitKat with MIUI 6 (v6.5.1.0 Stable as of writing). If you’ve handled a Xiaomi device before like the Mi 3 or Redmi 2, the UI experience is similar but at a larger scale. 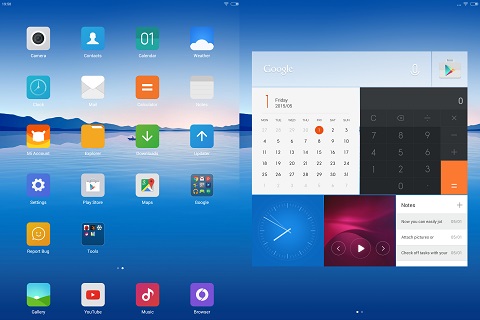 It has 16GB of internal storage with 13.46GB as usable which might irk some people but it has support for a microSD card of up to 128GB capacity. Pre-installed apps are present but kept to the usual Google apps like Gmail, Chrome, and Hangouts. The good news is these can be uninstalled if you’re not using it. Bloatware is non-existent which is great. 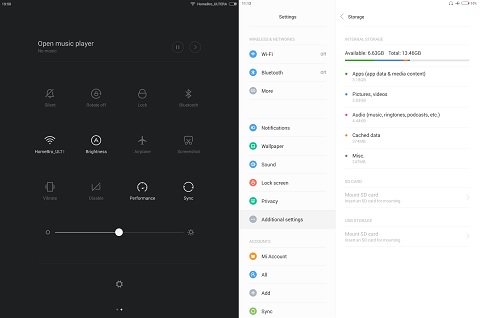 And since this is a tablet, dedicated apps for calls and SMS were removed which we don’t mind. However, we noticed that the Security app that we’re fond of using for optimizing our Mi smartphone and cleaning out junk was also excluded which is a bummer.

The Mi Pad is equipped with an 8 megapixel rear camera and a 5 megapixel front. The front camera, although not exactly superb, has a wide-angle lens and capable of producing decent “selfies” and should suffice for video calls. The rear camera on the other hand has better optics, photos are decent but not superb either. Take a look at the samples below: 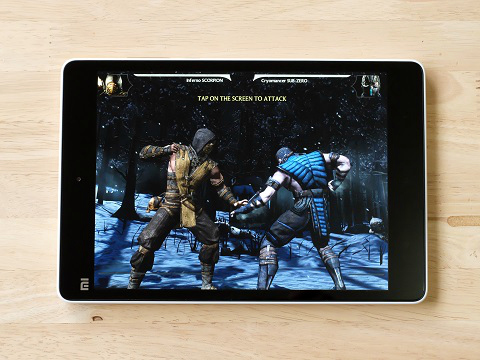 However, we noticed that it has problems with some apps as some of the benchmarks we used fail to run properly. MIUI also frequently gives us the “Loading please wait” notification for a few seconds when we exit to the homescreen and the “Unfortunately stopped” when opening the Settings app. We can say that MIUI’s “Stable” ROM isn’t really stable at this point. 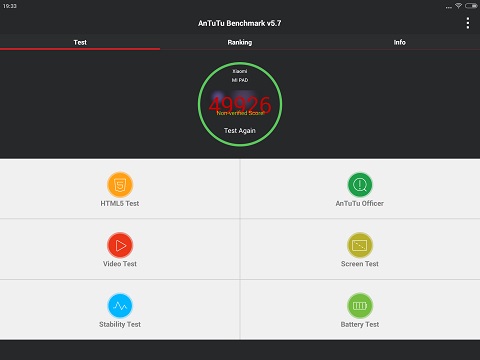 Given that the Mi Pad packs serious processing hardware under the hood, it’s just logical to equip it with a battery that can match it. In the case of the Mi Pad, it’s a 6,700mAh battery. We ran our routine battery test which includes playing a Full HD video on loop in Airplane mode, 50% brightness and volume, and headphones plugged in, the result is 14 hours worth of playback.

The Xiaomi Mi Pad, although a 2014 device, proves to be a strong offering in 2015. It has the hardware, design, and build that would satisfy all types of tablet users especially Android gamers and heavy multimedia users. It’s not the perfect tablet though as there are bugs and app compatibility issues with MIUI. The good news is it can be remedied with a software update and the active MIUI community is keen about that. For the best part, the Mi Pad isn’t expensive and carries a price tag of Php10,999. So if you’re in a budget but want a powerful Android slate, the Mi Pad is a great choice. 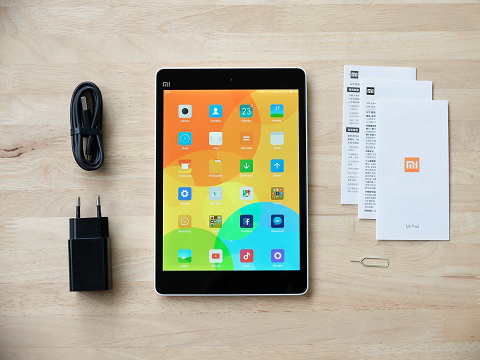 The Xiaomi Mi Pad 16GB is only available through Lazada. See listing here.

What we didn’t like:
* MIUI bugs
* Hefty
* 4:3 aspect ratio is not pretty on most movies
* Limited accessories
* Only available in White color in PH