Firefox OS: A Preview Of Good Things To Come

Firefox OS: A Preview Of Good Things To Come

On top, there’s Android & iOS, then comes Windows Phone & BlackBerry 10. Is there space for more mobile OSes? Sailfish, Ubuntu and the rest are just around the corner, but for now, we have Firefox OS here to look at. Here is a preview on what to expect once it’s out, so read on. Firefox OS here runs on the Geeksphone Keon, which is somewhat a statement that it can run on a low-spec’d handset. We already did a first impressions here if you want to check it out.

Like most devices, the OS requires users to undergo initial setup on first boot. This involves choosing your desired language, connecting to a WiFi network, then setting the date and time. 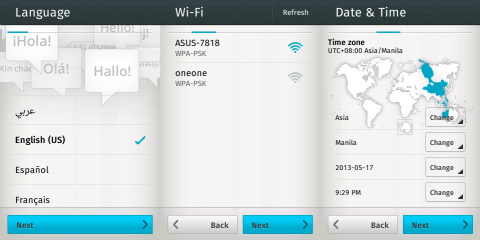 You can then choose to import your contacts from your SIM or Facebook account. After which, you can decide whether you want to help Mozilla improve the Firefox OS by sharing data about your phone. 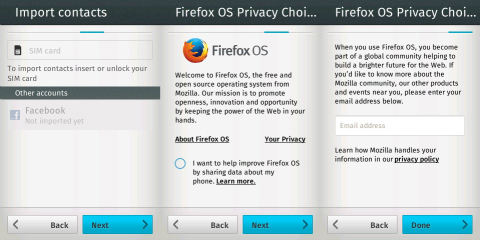 Once setup is finished, Firefox OS will give you a quick tutorial on how to navigate the OS. Swipe from right to left to browse your apps, swipe from left to right to discover new apps, tap and hold an icon to delete or move it. 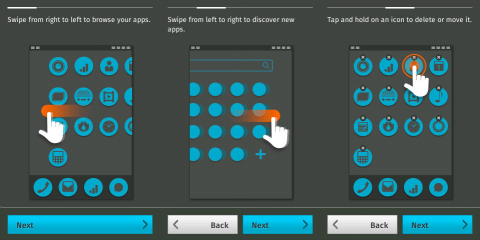 Swipe down to access recent notifications, credit information and settings, tap and hold the home button to browse and close recent apps. Beginners won’t have any issues learning how to navigate the device as everything is straight forward and easy to understand. Before you can access anything, you’d have to go through the lockscreen first. Unlocking the phone is done by swiping upwards from the bottom of the screen. From there, you can either choose to be directed to the home screen (by choosing the unlock button) or go straight to the camera app. For added security, you can also setup a 4-digit passcode to unlock the phone. 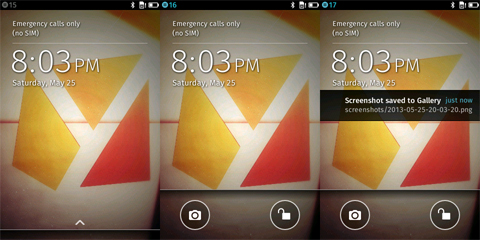 The lockscreen shows the current date & time, as well as the name of your network provider. In addition, it also displays notifications such as unread emails and/or SMS. We think that Mozilla did a great job with the Firefox OS’s lockscreen as relevant information is readily available at a glance and it gives users quick access to the camera app.

Swiping all the way to the left will show you the universal search bar which is similar to iOS. It will also bring you a grid of suggested web apps, search tags and things that you already have on your phone. 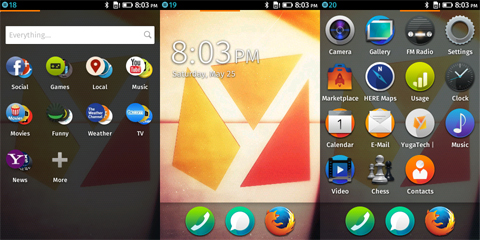 Below the universal search bar is a list of preloaded bookmarks, which takes a little time to load once pressed. You can add or remove them all to your taste. Next to that is the homescreen that displays the date & time with 4 customizable shortcuts below. With a long press on the blank space, you can change the wallpaper and get to pick from preloaded ones, from the gallery or from the camera app.

To the right are all your apps. We have HERE Maps by Nokia and a couple more such as an E-mail client which works pretty well. With a long press, you can customize it too together with uninstall options.

The notification bar is seen across the system most of the time and it shows the battery, the network, WiFi, Bluetooth and all of the usual stuff. 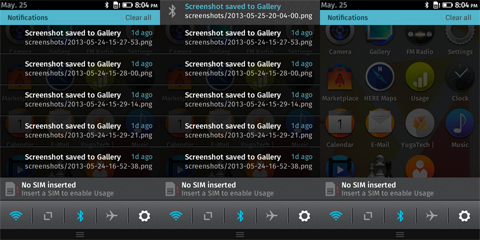 Pull it down and you’ll see your notifications with a “clear all” button at the top and the toggles down below. If you’re inside an app when you receive a notification, boxes will appear at the top for a short while similar to Apple’s iOS.

As you can see in the screenshots, the design of the OS is quite polished. In totality, Firefox is like a marriage between Android & MeeGo that bares iOS-like functionality (single home button, homescreen similarities). 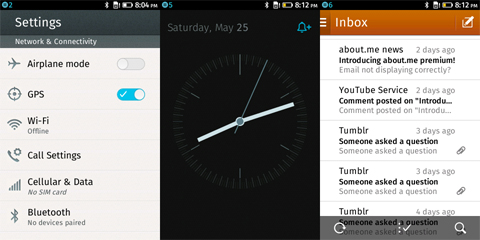 There are barely any gesture-based operations in FireFox OS as compared to other mobile OSes, so we’ll have to stick with the conventional tapping and swiping.

As for the apps, they are still in development. However, when we entered the Marketplace – it was loaded (it even seemed as loaded as the Play Store). Upon pressing install, poof! – in split-seconds the download was done. We found out later that some of these apps functions like a web bookmark. This app won’t run without internet, and it simply directs you to the mobile version of that webpage. No need to worry though, as we’re sure real apps are probably in development.

Of course, there’s the volume rocker that works like how it does on Android, iOS & the rest. The power button locks the device with a single press, and with a long hold, it gives you options to toggle Airplane mode, restart, silence incoming calls and power it off. 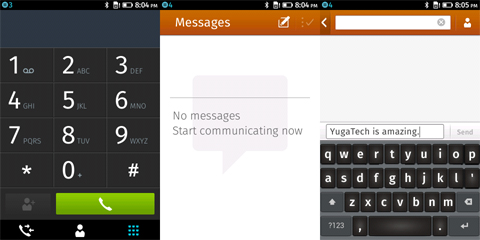 To take a screenshot, you need to press and hold the power button together with the home button.

Multitasking can be done here, as it doesn’t close the applications you leave immediately. Long press the home button and you are brought to your recent apps/task switcher. You have the option to close them with a button on the top left corner of the window.

It’s the start of something more

We think the best part here is how the OS can run so smoothly on an entry-level category device. Firefox OS is easy in every sense & simple without sacrificing too much functionality. In fact, for a newly bred OS, it does a lot of things better than other platforms – for example, Windows Phone 8 in multitasking.

It’s not the final product yet, and Mozilla will be adding a lot more into this OS such as social networking integration. For our last words, we want to keep it simple and concise – this fox is on fire!