The highly-awaited franchise of the popular basketball video game is finally here in the Philippines. With MVP Kevin Durant presented proudly on the cover, the NBA 2K15 is here to bring more adrenaline-pumping game with new modes and added improvements to its gameplay. 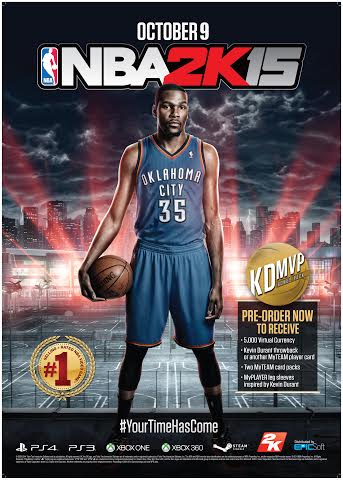 The NBA 2K15 introduces a new mode called MY League which lets you play both single season or even up to an 80-year franchise experience. An exclusive to NBA 2K15 PlayStation 4, XBoxOne, and PC, it lets you control every aspect of how your very own league plays out.

The game also includes an expanded list of Euroleague teams, amounting to over twenty in total. The Pharell-soundtracked game offers a number of improvements in different aspects as well as introduces a new way of shooting.

Animation: This year’s game will feature approximately 5,000 new animations, with a core focus on NextGen movement.

Control: Players now feel more engaged in every basketball decision and action, with control over rebounding, steals, blocks and the like.

Defense: Improved floor game, more contact in the pain and better locomotion, including an all-new defensive AI system to deliver a more realistic flow, to rotations on defense and contextual decision-making.

New Shooting System: Timing used to be just one factor in the calculation, but now all shot factor are fed through the shot meter, making timing the ultimate determiner as to whether a shot is a make or miss.

NBA 2K15 will hit store shelves tomorrow, October 9, 2014, and will be available in PlayStation4, PlayStation3, XBoxOne, Xbox360, and Microsoft Windows PC. It’s worthy to note that this is the first time in franchise history that the PC version will be the same as the PlayStation4 and XboxOne versions.

There were no official store pricing released as of yet, but you can find it at Steam for Php1,999. For the consoles and PC, they could go for the same price as the NBA 2K14 when it was previously released – that is Php2,395 for the PS3 version, Php2,195 for the Xbox, and Php1,295 for the PC. But as explained earlier, the PC version might end up having the same price as the consoles’. We’ll update this article once we get the details.

In addition, you can also register your box codes at Xplay’s website to join upcoming tournaments, exclusive events, and promos.