NTC to hold public hearing for better Internet in PH

NTC to hold public hearing for better Internet in PH

Have an opinion you want to share with the National Telecommunications Commission (NTC)? You can join the live streaming event to be held this Friday. 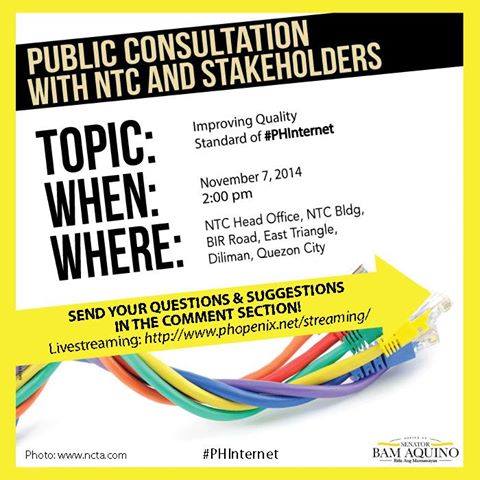 The gathering is towards improving the quality of the Internet here in the country as well as a discussion on setting the minimum broadband speeds. Sen. Recto recently filed for a Senate Bill calling for 10Mbps as the minimum speed, but until the second quarter of 2014 we’re still at 2.5Mbps according to a report. Hopefully, these concerns will be addressed on the said event.

As seen on the details above, the hearing will be held at NTC’s head office starting 2PM this Friday, November 7, 2014. PHOpenIX will conduct a live stream over at their website. So if you have questions about our sluggish Internet speed or simply got some comments and suggestions, now is the time to voice them out.