LG was trying to show their versatility as a tech company when they introduced a set of well-designed speakers in last year’s Computex which includes a portable wireless speaker dubbed as the LG Music Flow P7. 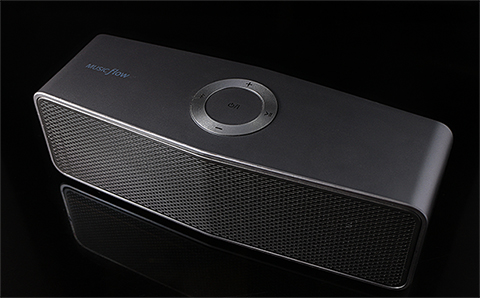 For a small portable speaker, the Music Flow P7 is deceivingly heavy which can be both a good and a bad thing. On one hand, the speaker’s heft adds more stability to the speaker, making it more difficult to accidentally tip it over when it’s placed on a smooth surface.

On the other hand, the added weight can make the NP7550 a bit cumbersome to lug around inside your bag when you’re out for a trip.

Controlling the Music Flow P7 can be done though the physical buttons on the speaker or through a companion app called Music Flow Bluetooth which is free to download in iTunes App Store and Google Play Store. Through the Music Flow Bluetooth app, users can control almost every aspect of the NP7550 and adds the other basic controls like skip forward/backward and mute which were notably missing on the physical buttons of the speaker.

The app also doubles as a media player. It automatically pulls songs from your device’s library and can even provide songs suggestions based on the user’s current mood.

Setting up the LG Music Flow P7 for the first time is a breeze and can be done in three easy steps: turn on the speaker, press the Bluetooth button, and your other Bluetooth-enabled gadget should be able to seamlessly identify and connect to it in no time.

The speaker will produce a short beep once the Bluetooth connection is established, accompanied by a non-blinking white LED on the Bluetooth button.

Once the initial setup is complete, users won’t have to go through the process again. All that’s left to do is make sure that the Bluetooth on your device and the speaker is on, and both devices should sync to each other. 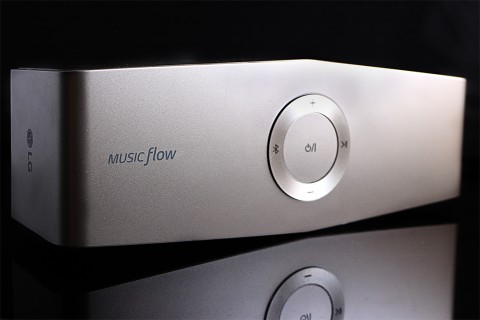 But what separates the Music Flow P7 from other portable wireless speakers is the additional Bluetooth functions on top of the basic ones. For one, the NP7550 can accommodate up to three Bluetooth devices simultaneously which makes it easier to switch from multiple devices without the need to disconnect the other.

Another nifty thing about the Music Flow P7 is that in addition to being a standalone speaker, it can be paired to another Music Flow P7 and can be assigned to function in Stereo or Twin modes.

The former allows the two speakers to function as left and right speakers, while Twin mode will just duplicate the setup for louder sound output. The Stereo mode can also be used with a compatible Bluetooth-enabled LG TV for a surround sound setup.

We usually associate sound output with the speaker’s size; the bigger it is, the louder the sound it can produce. That was not the case though with the LG Music Flow P7. Despite of its small size, this portable speaker can easily fill a medium-sized room when the volume is cranked to the max.

Unlike other portable speakers, the loud sound output of the Music Flow P7 didn’t come at the expense of quality either as the sound had only minimal (and very acceptable) distortions at high volume. 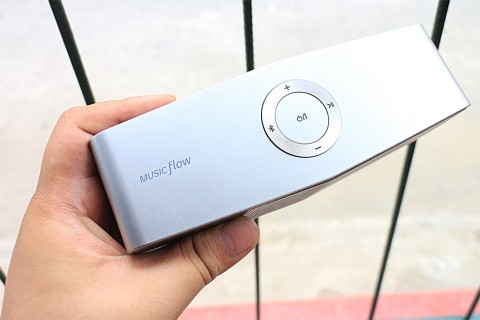 Sadly, we can’t help but feel a bit underwhelmed with the quality of the sound we got out of the Music Flow P7. It’s not crappy per se, but the unbalanced sound signature of the speaker is just not versatile enough to be suitable for a wide variety of music genres.

This is because the Music Flow P7 produces a midrange-heavy sound. The Mids drown the other sounds so much that little of the bass and highs could be heard once the vocalist struts his/her stuff.

The rare times that we heard any bass from the speaker, it failed really short on providing a deep and rumbling thump which is rather disappointing to say the least.

The same can be said for the highs which are, for the most part, indistinguishable and lacked clarity. Noticeably missing are the sweet and sparkly tune from instruments like the chime and tambourine.

The Music Flow P7 is being billed by LG to last for 9 hours on a single full charge, and during our time with the speaker, we can attest that the company’s claim is true. In fact, there are times when the speaker even surpassed its rated mileage when cranked the volume a little bit, giving us around extra hour and half of battery life. Overall, the LG Music Flow P7 is one of the more well put together portable speakers we’ve seen. The speaker’s uncluttered and minimalist design, coupled with its reassuring heft, gives the speaker a classy look that should complement your current living room setup or a nice fixture on your desk.

Sadly for all of its good design traits, this portable speaker was only able to deliver a mids-centric sound output that may potentially be a huge dealbreaker, especially for demanding audiophiles.

The LG Music Flow P7 is available locally for Php6,890.