Sony has been really keen on creating Bluetooth accessories for Android phones lately, the ‘Live View’ wrist watch was a hit despite its software flaws and its successor, the ‘Smart Watch’ also seem to suffer from the same fate causing its Play Store page to get flooded with 1-star ratings.

The Smart Headset Pro does not provide as much functionality as its bigger brothers, it does however, pump out decent-sounding tunes and let you read SMS or take calls without having to take out your phone. 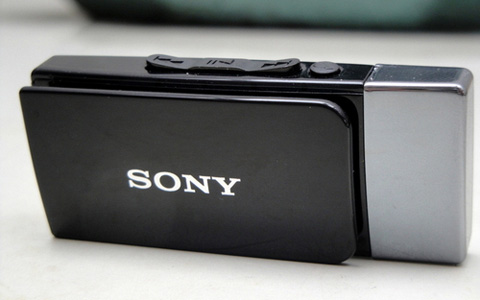 The Smart Headset Pro is feather-light and made entirely out of shiny black plastic with a dark chrome paint coating the plastic end cap. Pulling off the faux metal cap exposes the micro SD slot and micro USB port, loading up the included 2GB card with MP3 tracks is supposed to let us play tracks directly off the headset without using the battery-sucking Bluetooth but we weren’t able to make it work (more on that later). 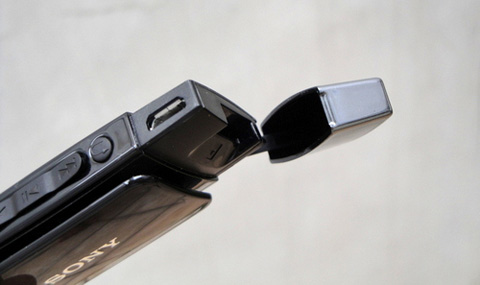 On top of the MW1 is where the power/screen off switch, microphone and 3.5mm audio jack are found. Down on the left are the media playback and return keys, on the upper right side is the volume rocker. The keys are made from a rubbery material except for the power button which is made from hard plastic, Pressing the buttons felt ‘mushy’, a similar sensation with that of the Blackberry Curve 8520’s media keys. Round the back is where the built-in clip is, does the job well but you’re better off putting the module inside your pocket since it feels very flimsy — as if it’ll snap off anytime.

The headset’s monochromatic OLED screen is nothing fancy, it is pixelated and only shows the bare essentials. It’s viewable indoors but we can’t say the same when out in broad daylight, cranking up the brightness doesn’t really do much, we’re better off saving the juice for the Bluetooth radio anyway. 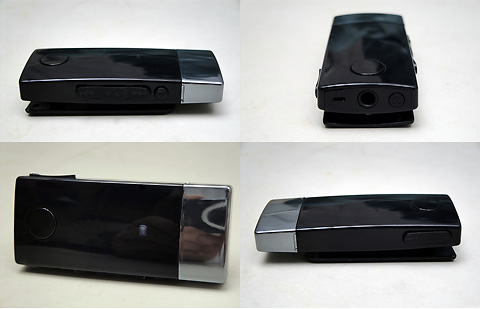 The overall build quality of the MW1 is okay, not astounding but we reckon that the bloated price is probably due to the accessories included with the set instead of the device itself.

The MW1 Smart Headset takes advantage of the battery-sipping Bluetooth 3.0 standard alongside A2DP profile for music playback. We’re pretty satisfied with the Bluetooth reception since we haven’t experienced any sort of connectivity issues, audio distortion or whatsoever. Just make sure not to treat it like WiFi, Bluetooth signals are very short-ranged so naturally, It’ll have trouble passing through concrete walls. Always carry the paired phone with you.

Pairing the MW1 with our phone was relatively easy but make sure that you install its dedicate app from the Play Store. It comes with a lot of freebies like Text-to-Speech (which dictates incoming messages and emails through the awesome earphones), enabled Smart Headset functionality (like PC drivers), display track info and many others. 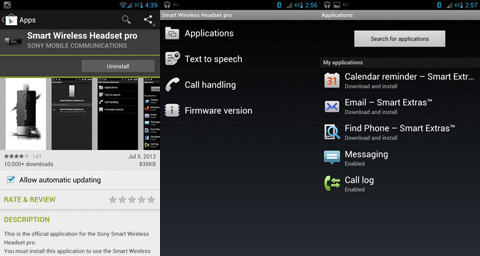 Turning the Bluetooth off on our Galaxy Note will automatically put the device into sleep to save power, however, it still eats up quite a bit of charge when left as it is so shutting off the MW1 completely off is better if you’re not planning plugging it in anytime soon. It’s worth noting that the headset quickly paired with our phones upon switching the Bluetooth on, letting us listen to music from the Desire V while reading received SMS from the Note.

Some of the gripes we’ve had with the headset is that sometimes the dedicated Sony app does not start by itself [on both phones] when paired which doesn’t let us skip to the next mp3 track or see any info regarding the song we were currently playing. The call/end button is also glitchy, sometimes it lets us redial the last phonebook entry we’ve contacted but most of the time it does nothing, which is the main point of purchasing a phone headset, it does work when answering calls 100% of the time though. 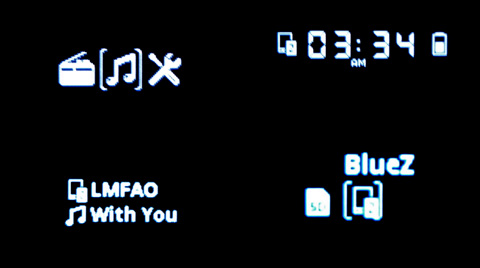 Another thing is playing music directly from the micro SD slot, the thing couldn’t find the songs no matter how hard we tried. We formatted it, uploaded the songs, placed the songs in a ‘Music’ folder, updated the headset’s firmware, etc. it just wouldn’t do the task. Such a shame, we ended up using the 2GB card on our phone instead.

Sony has always been recognized for sound quality, with the MW1 Smart Headset, they certainly did not disappoint. The bundled in-ear headphones look great, feels very well built and sounds pretty good. We’re not sure if these phones feature single balanced armature or moving-coil drivers though we’re suspecting it’s the former due to the hinted 6mm driver diameter and narrow aluminum casing. We’re no experts but the sound signature is very similar with that of the single BA Sony XBA-1 earphones.

While listening to Norah Jones’ “Come Away With Me”, we couldn’t help ourselves from smiling. The highs were very detailed, bright and crisp without the annoying ‘hissiness’, separation of the instruments was noticeable too, the piano sounded so realistic and we felt so enwrapped with pleasant ‘rainfall’ coming from the cymbals. Norah’s pleasantly raspy voice sounded even more better since the mids were natural and clear too, it does not seem to get affected by the subtle [slightly thumpy] bass — even when listening to something like DJ Chuckie’s “Let the Bass Kick”. 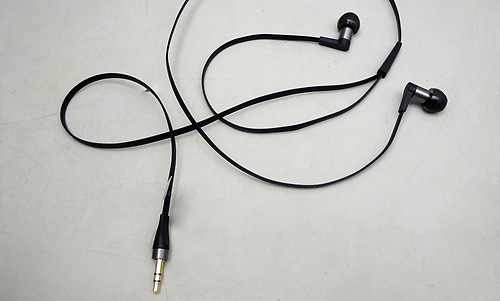 Have we mentioned that we played the music via Bluetooth? Well, listening to music directly from the laptop was even better, mind you. Unfortunately, the L-type wiring [which we’re not fans of] was just too short and awkward to use. These buds are also very efficient, using them with the iPod Nano (6th gen) can make for a music listening experience that’ll last a whole marathon, we could barely get through half of the player’s volume bar because the earphones were already loud, which is great.

Well we’ve already described to you that listening to the bundled earphones was a pleasant experience, and a great pair of cans is just as good as its music source so our description up there pretty much says it all. The MW1 produced great audio even with all the A2DP compression and such but nothing beats the raw output from DACs (Dedicated Audio Chips) of course. The FM radio works as promised but, we don’t really listen to FM broadcasts unless we wanted to know the latest updates regarding the traffic situation in EDSA.

Let’s talk about call quality instead. For starters, the MW1 handled mobile conversations like a charm, no doubt about it. and like we’ve said, the bottleneck here is the audio source and the network. People we’ve talked to sounded pretty good on our end and the MW1’s microphone performed admirably well given that the main unit is situated somewhere near the mouth, It does not have background noise-cancellation so don’t expect your buddies to hear you well when a passenger jet passes over you (3G test calls). 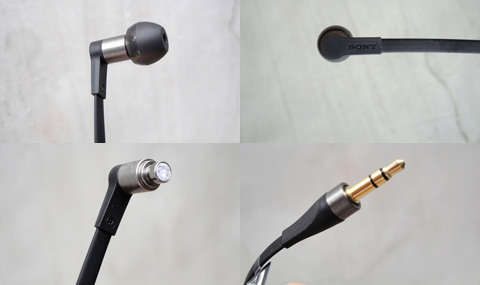 The mic suffers from the usual over sensitivity unfortunately, our callers complained that the TV was too loud or that the creaking of the doors were too irritating. It’s weird though that none of their complaints were apparent on the second test call, we did not even alter the scenario. There’s probably some auto-volume algorithm in play here but we can’t really be sure.

We weren’t able to try out the Text-to-Speech functionality, we think there are still some software-related issues that Sony needs to fix — like the automatic starting of the app upon pairing.

Battery life was splendid for a Bluetooth headset, we’re used to getting around 3-4 hours of talk time with on-ear contraptions like the Jabra EasyGo so it’s kind of a relief not having to charge a headset every night which is great. The MW1 was able to last us for two days with lots of calls, Bluetooth switched on permanently, continuous incoming SMS and email, lots of music, etc.

We’re not sure about the claimed 11 hours of talk time but since we listened to music for about 6-8 hours total of the two-day’s worth of charge, we’re guessing it’s around 9 to 10 hours of heavy use including reading SMS and emails off the headset’s display in 50% brightness, an hour long conversation, 9 hours standby and simultaneous connection with two phones. Not bad, impressive actually.

Charging the headset was also a breeze with its included AC adapter, it took about 30 minutes to less than an hour to fully top up the tank.

All in all, we wouldn’t think twice about purchasing the Smart Smart Headset Pro if we had the cash to burn, the sound quality is downright awesome and It’s a chore having to pull the humongous Galaxy Note out of our bags just to reply to text messages or answer calls and emails… even skipping tracks for example, so we need something like the MW1 to make simple tasks like these easier to execute.

Sony is also generous enough to bundle the headset with a useful micro SD card reader and a 2GB card which was pretty pointless because the MP3 player functionality does not even work, hopefully this gets fixed with a software update soon.

The build quality can be an issue for some too but It can be remedied with a bit of TLC, and we think that the bundled earphone chord is a little too short, the L-type configuration (typical Sony crap) is completely unnecessary too which pretty much restricts users to wearing shirts with a chest pocket, it makes sense though because the mic is built onto the main unit. You can always wear it with your favorite headphones if you don’t mind holding the MW1 when calling someone.

What we like about it:
â— Great-sounding
â— Looks expensive
â— Functional
â— Pairing is a breeze
â— User-friendly

What we didn’t like:
â— Expensive
â— Software is full of bugs (both the Android app and firmware)
â— Feels cheap

Disclosure: Widget City provided for the review unit. They are selling it for Php5,900 (see listing here). They’re giving an additional 8GB microSD card if you provide a screenshot of this page to them.