Angelo Casimiro, the same student who made shoes that charge smartphones, is at it once again and this time, he builds a fully-functioning BB-8 droid from the latest Star Wars movie. 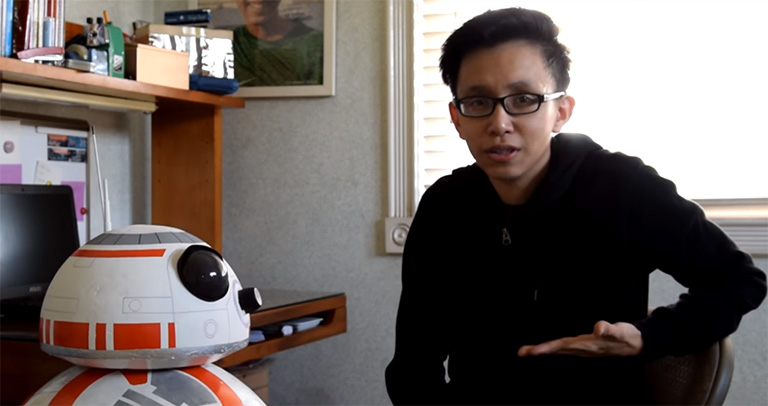 The droid replica is phone-controlled and was made with household materials and Arduino circuitry. With Angelo’s know-how on electronics and robotics, doing this project was fairly simple for him and he even posted a detailed tutorial on instructables.com where you can follow his steps on making your own working droid just like in the movie.

As for the materials, an instructional video posted by TechBuilder shows that he bought the necessary items (like paint, glue and a beach ball) from a hardware store and everything else is recycled — like the Christmas ball for BB-8’s eye, a Wi-Fi router antenna, and roll-on deodorant balls for the mechanism of the droid’s head that stays upright all the time.

Although Angelo is the brains behind this project, his family helped him in some areas like painting the body and designing it to be faithful to the markings of the droid in the movie. It’s also reported that he is currently making some improvements on the droid before its scheduled TV appearance.

If you want to make one for yourself, the above video shows you just that. It covers the steps from making the body itself down to the mechanism and programming the software so you could control it from a smartphone.