realme recently launched the newest addition to their TechLife ecosystem, the realme TechLife Air Purifier. Sporting a powerful filtration system, multiple fan modes, and a modern design, could this device be the next must-have air-purifying solution for your home? Let’s take a closer look. The realme TechLife Air Purifier arrives in a sizable packaging that may look heavy at first glance but is pretty lightweight. The unit itself comes pretty secured, wedged between two package cushions that seem to be made out of the recycled pulp. 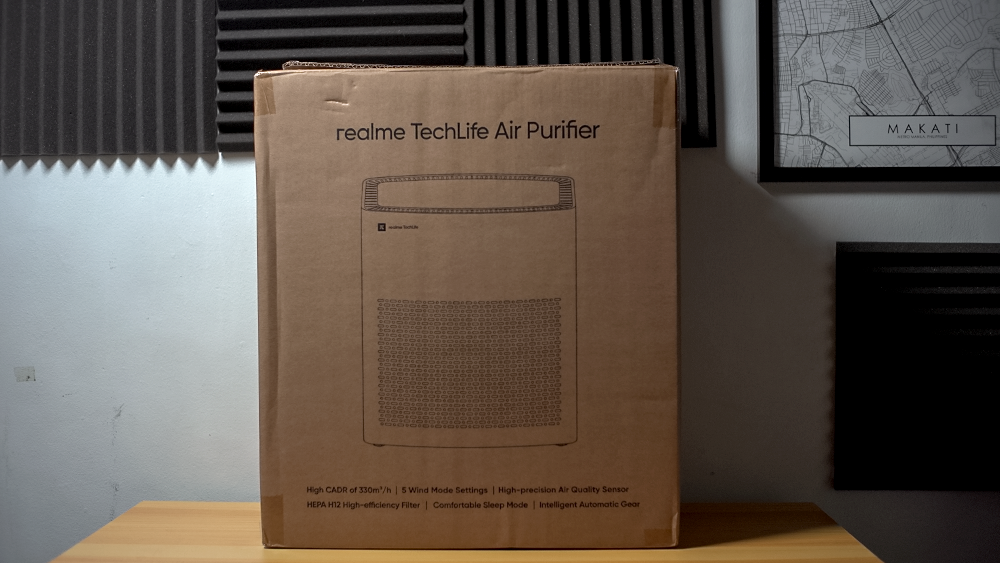 Along with the air purifying unit comes a HEPA H12 filter, pre-filter, warranty, and paper manual – with the first two inclusions already present inside the device.

Design-wise, the realme TechLife Air Purifier is pretty minimalistic. It sports a sturdy plastic build that is rounded off by a matte white body and minimal accents of gray for the capacitive control buttons and fan grill.

While primarily promoted for larger homes and offices, the minimalist design blends pretty well with smaller-sized living spaces such as condos. Bearing that, it takes up very little horizontal space and adopts an almost inconspicuous style when set beside high contrast furniture like wooden chairs and tables. 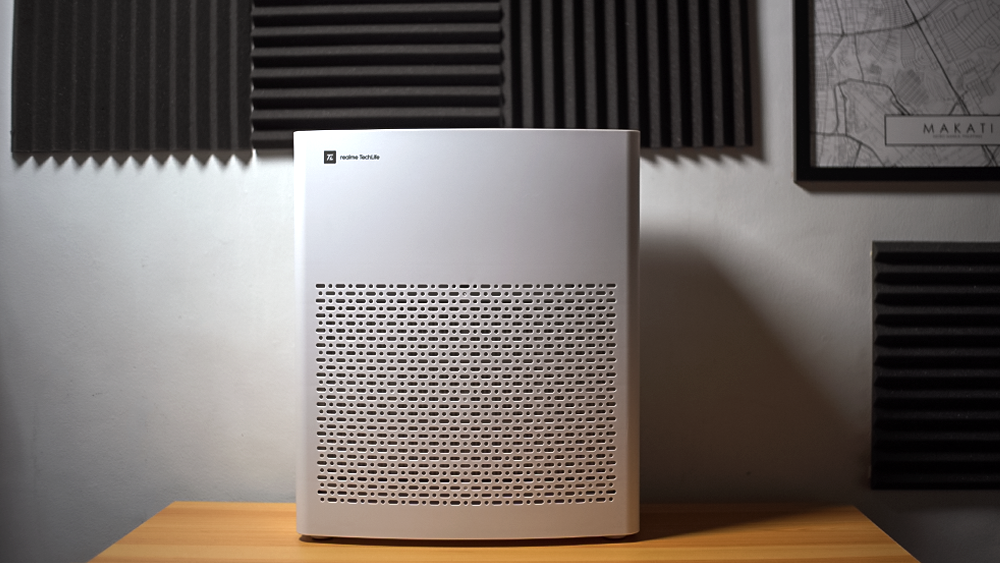 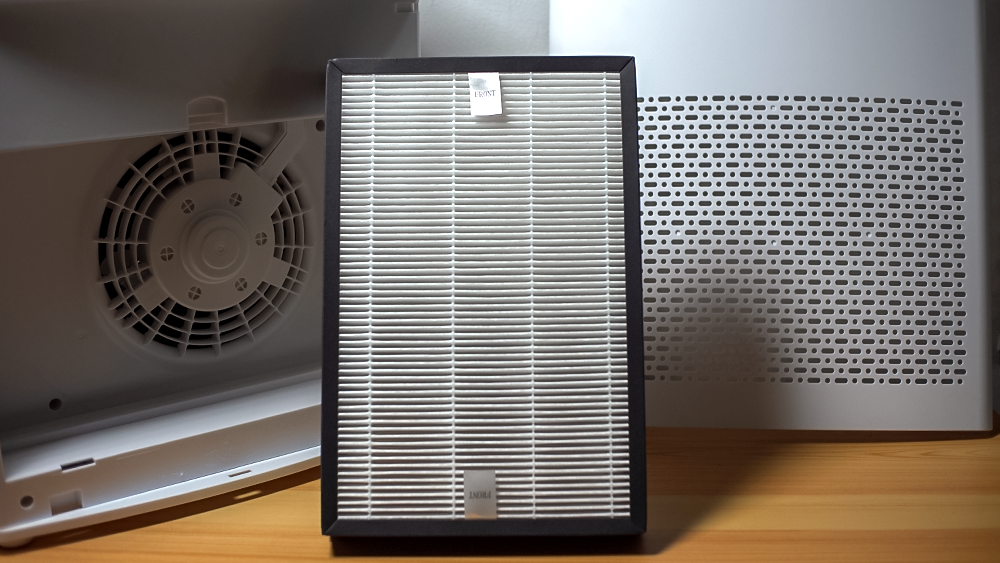 Similar to a smartphone’s touchscreen, the capacitive control buttons only need a light touch to operate. And, while there’s no haptic feedback, they do let out a subtle beep while simultaneously illuminating the indicator light.

From the moment you turn it on, the air quality indicator located between the shutdown timer and fan speed buttons will automatically cycle between green, orange, and red before arriving at the appropriate air quality in your home.

And, to make things a little easier, realme conveniently placed the indicator chart on the side panel of the device, along with a similar illustration of the installation and filter replacement process found in the manual. 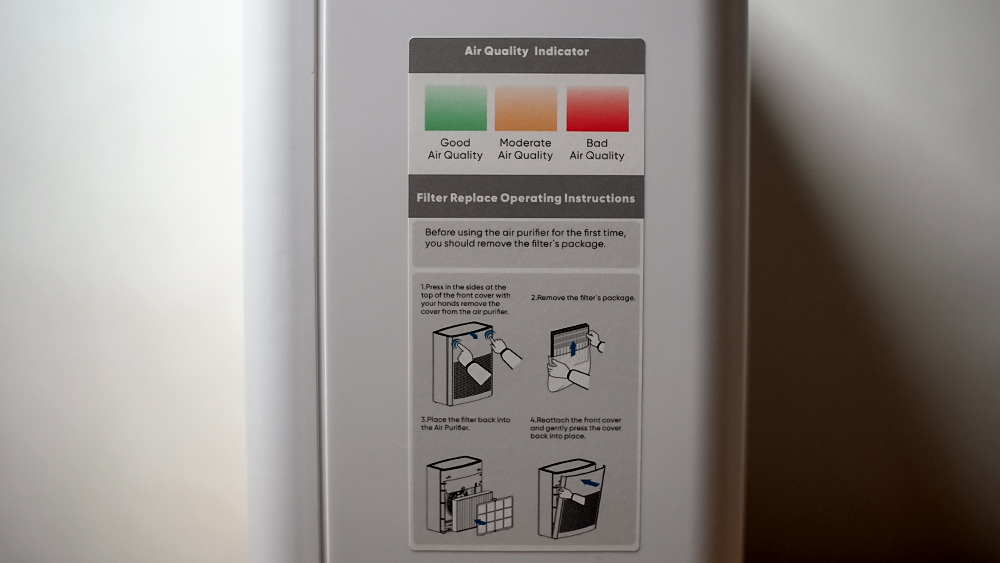 As for navigation, the control panel is pretty easy to understand right off the bat. The auto-shutdown timer and fan speed buttons come with very legible numbers to indicate hours of operation and fan intensity, respectively. And, the buttons below (power, auto mode, night mode, and filter counter reset) are displayed with straightforward icons. 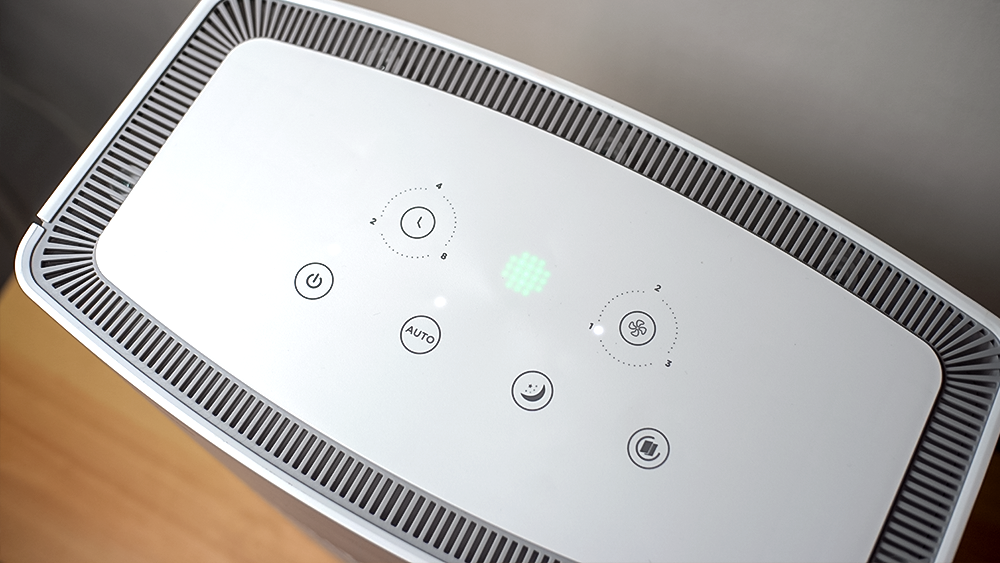 The realme TechLife Air Purifier comes with a HEPA H12 filter that is easily detachable for easy replacement. realme claims that it can filter as much as 99.95% of 0.3-micron particles and PM 2.5 pollution such as dust, pollen, hair, animal fur, and other allergens. While inside, it boasts a built-in Japanese-tech Sharp air quality detector and three-layer filtration structure. It also comes with a pre-filter that is similar to a typical run-of-the-mill screen. 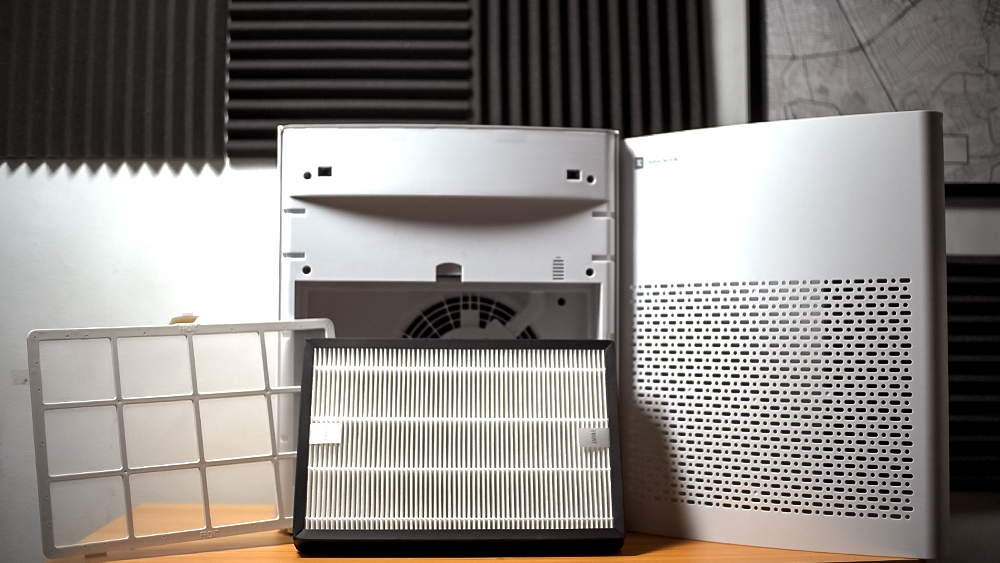 When set on the lowest fan speed or night mode, it emits a light noise from the fan motors, and suction can be felt subtly from the front panel duct. However, the fan noise and suction increase significantly side by side when set to the highest fan speed.

The device can get pretty loud when set on level 2 and level 3 fan speeds. While this might not be a problem for those with larger homes, those living in smaller spaces might find this bothersome, especially when placed near entertainment consoles like televisions or computers. For example, I placed it on the other side of the room on level 3 fan speed while working, and could still hear it through my earphones. But, for the most part, it doesn’t emit any irritating sounds, more of a buzzing noise akin to a heavy-duty air conditioner.

A glance at the manual will instruct you on the proper placement of the unit for smooth operation. It states that a 6.6ft (2m) radius must be observed when placed around equipment producing electric waves such as televisions and radios. Moreover, it cannot be placed in extremely humid or smoky environments, and the outlet where it is plugged must be void of any nearby flammable objects such as curtains.

In addition, it must also be placed in an area that is removed from any wind interference as it may affect the unit’s operation. And for those thinking of positioning the unit by a wall, make sure that there is enough airflow for the air outlet, and likewise, be prepared to periodically clean your wall as it may get dirty over time. 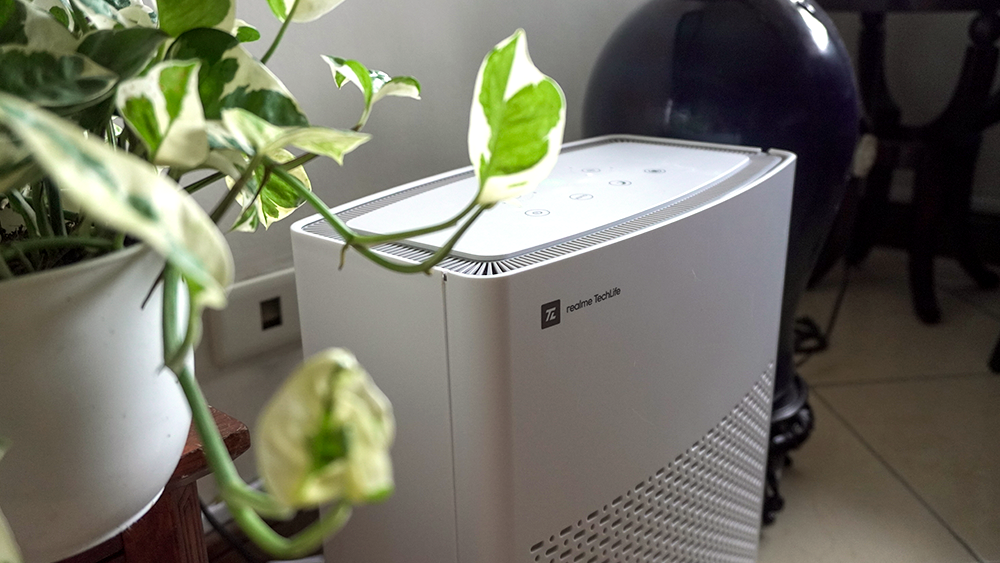 The realme TechLife Air Purifier retails for PHP 5,990 on Shopee and Lazada. For the price tag and high-level filtration features, it seems that realme is really putting in the effort to produce good products, which is essential for the home and makes cleaner air more accessible. But, do we recommend it? Well, if you’re in the market for an affordable air purification system that doesn’t skimp on the fine details, then, by all means, the realme TechLife Air Purifier is a must-have for your home.

Where can i purchase replacement for the filter?