The ROG Zephyrus is one of the company’s most popular gaming lineup and now includes the Duo, S, M, and G series. The latter is powered by AMD and one of its latest models is the ROG Zephyrus G15 GA503QS which sports an AMD Ryzen 9 5900HS CPU and GeForce RTX 3080 GPU and comes in this eye-catching Moonlight White color. But how does it perform? Find out in our review. 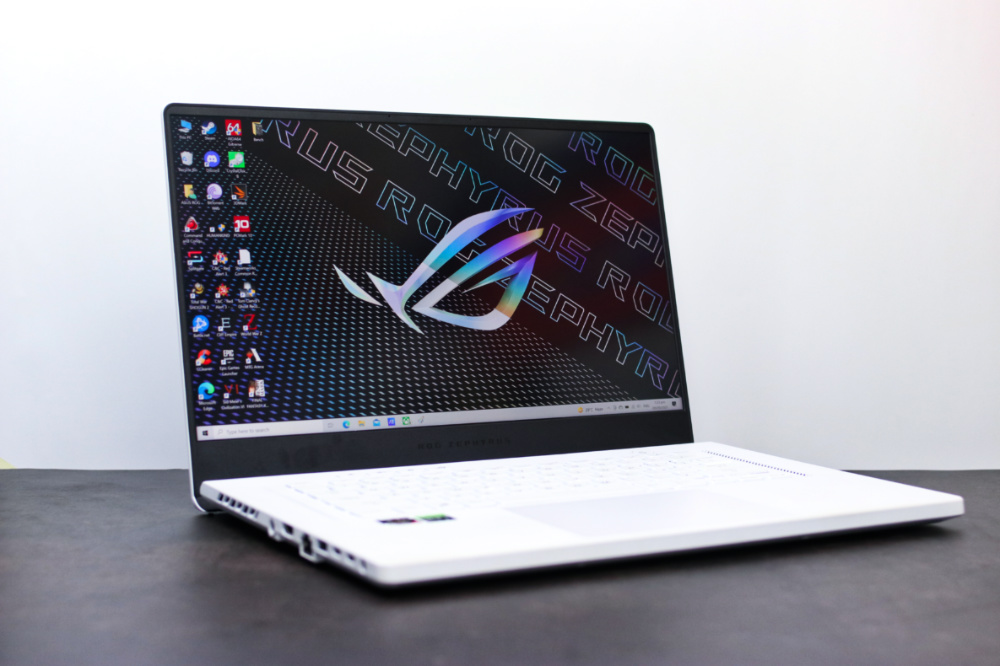 One of the things you’ll notice about the Zephyrus G15 is its color. While it comes in Eclipse Gray, the Moonlight White is more eye-catching and goes against the typical black color of gaming laptops. 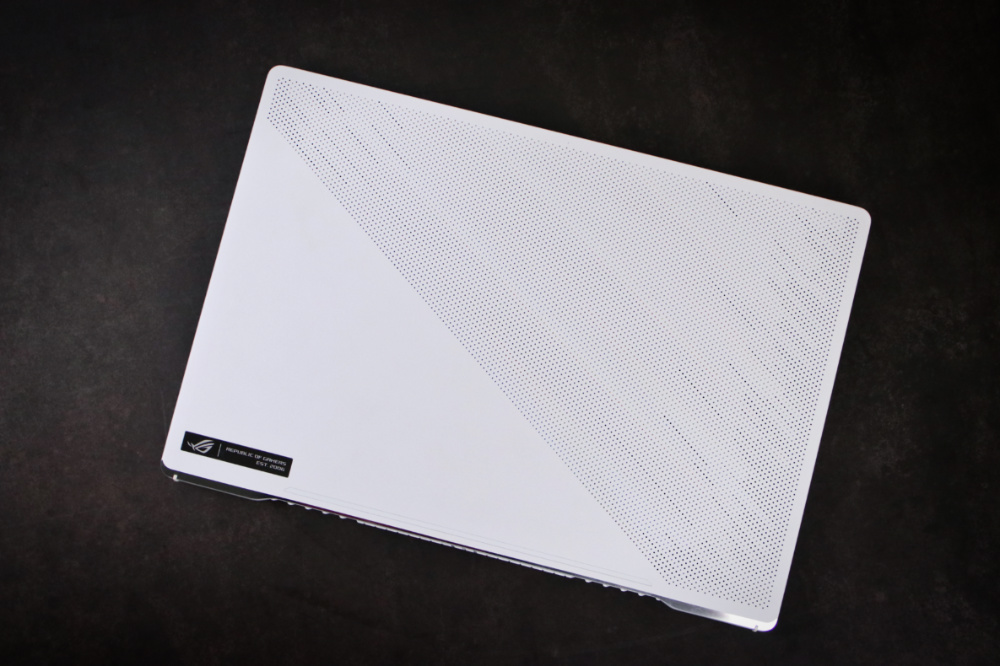 The lid is what you’re going to notice next. It’s made of reinforced metal with a precision cut dot matrix design. These are tiny hole cutouts that show the shimmering effect from the prismatic film under it. The effect is not always visible though and appears when there’s a direct light hitting it from a specific angle. 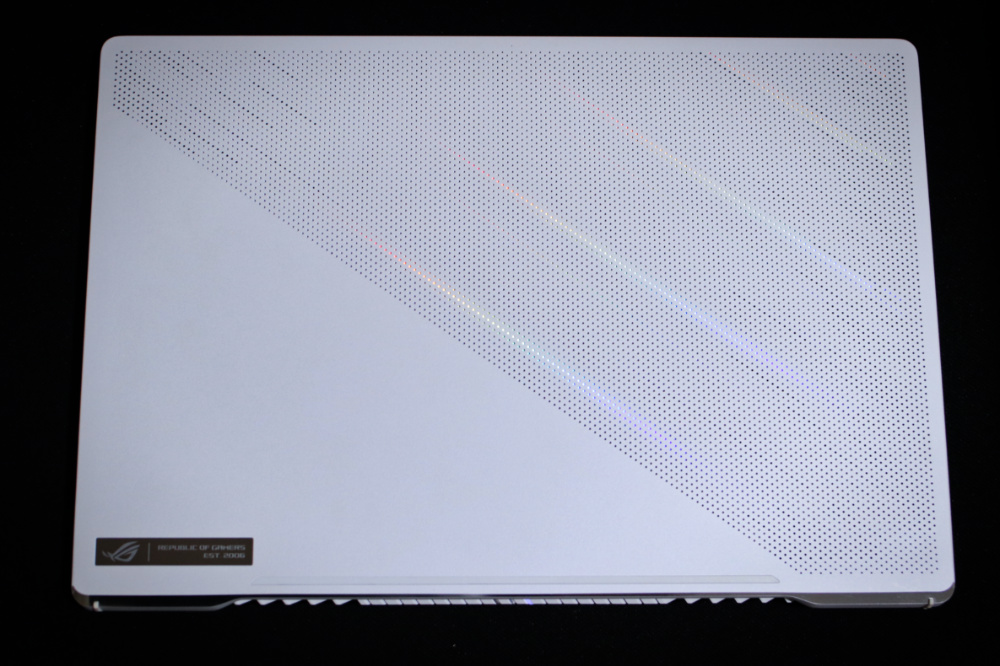 Build quality is great. The metal lid is solid and cool to the touch. The chassis is also metal while the bottom panel is made of high-quality plastic with a matte texture. Although we noticed that the palm rest can accumulate dirt and can turn yellow over time, so make sure to wipe it after use.

Open the lid and you will see the 15-inch screen with a slim top and side bezels. At this point, the ErgoLift hinge gets to work and elevates the laptop for better airflow. The top bezel houses two microphones, and as you noticed, there’s no built-in webcam, but the package comes with a ROG GC21 external camera. 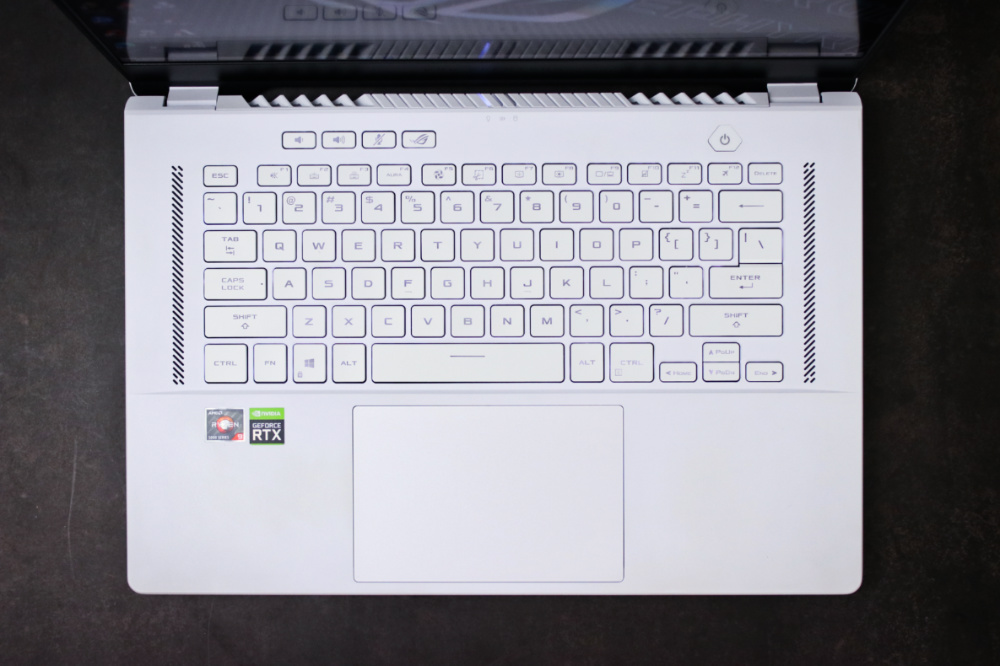 Found below the screen are the chiclet keyboard and dedicated buttons for volume, mute, and ROG Armoury Crate. The keyboard is backlit with three levels of brightness. It has no RGB but supports light effects. The keys are of good quality with good travel and nice to type on. Found on the left and right-hand sides of the keyboard are the front-facing twin tweeters, then below it is the huge trackpad. 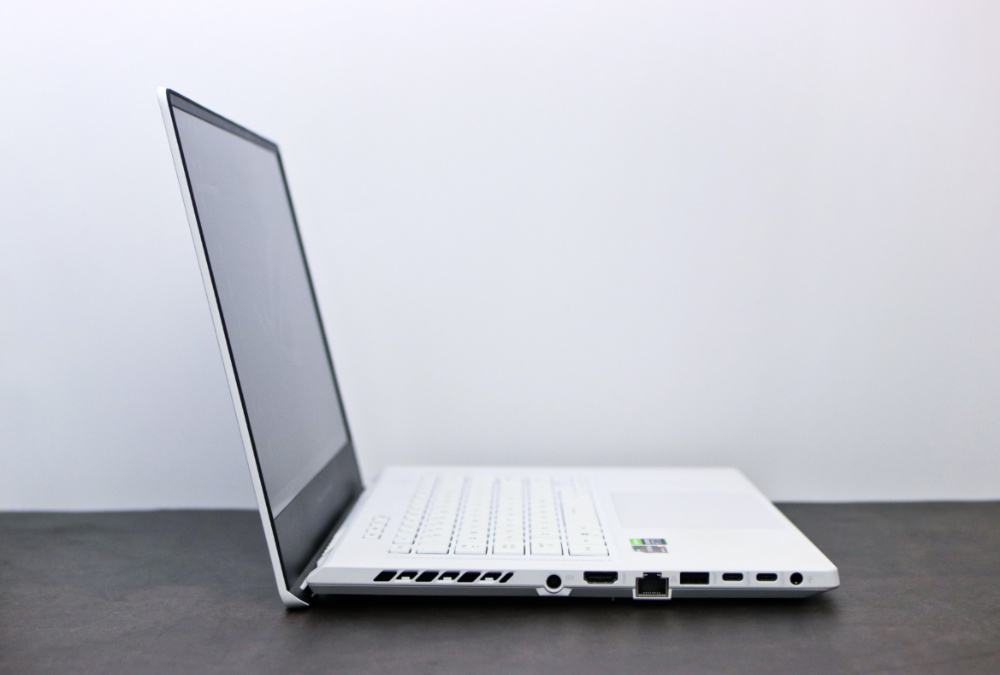 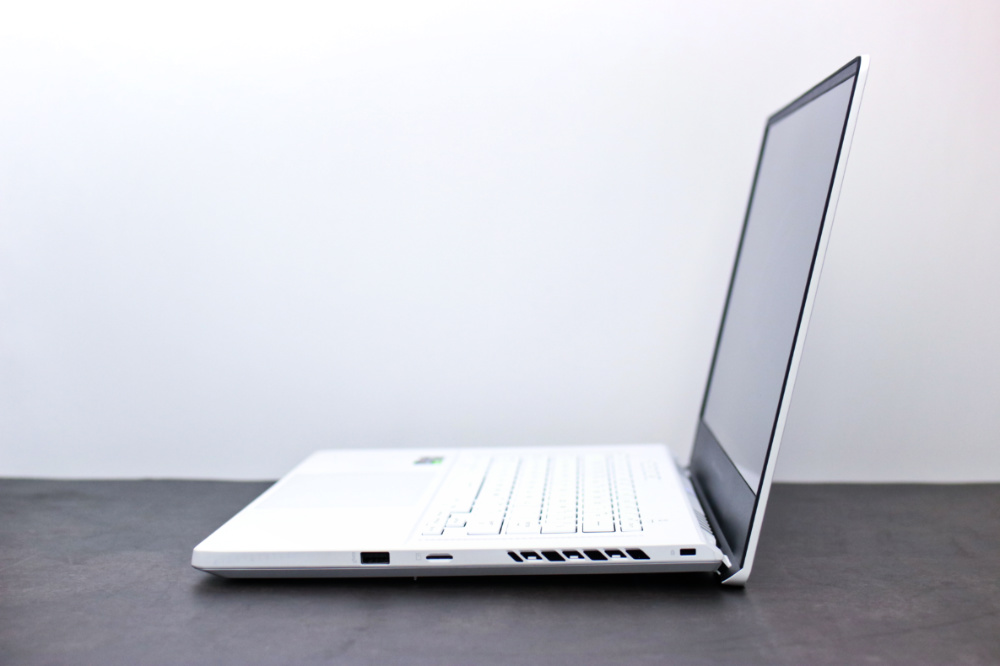 To the right, we have the Kensington lock, vent, microSD card slot, and USB 3.2 Gen2 Type-A. 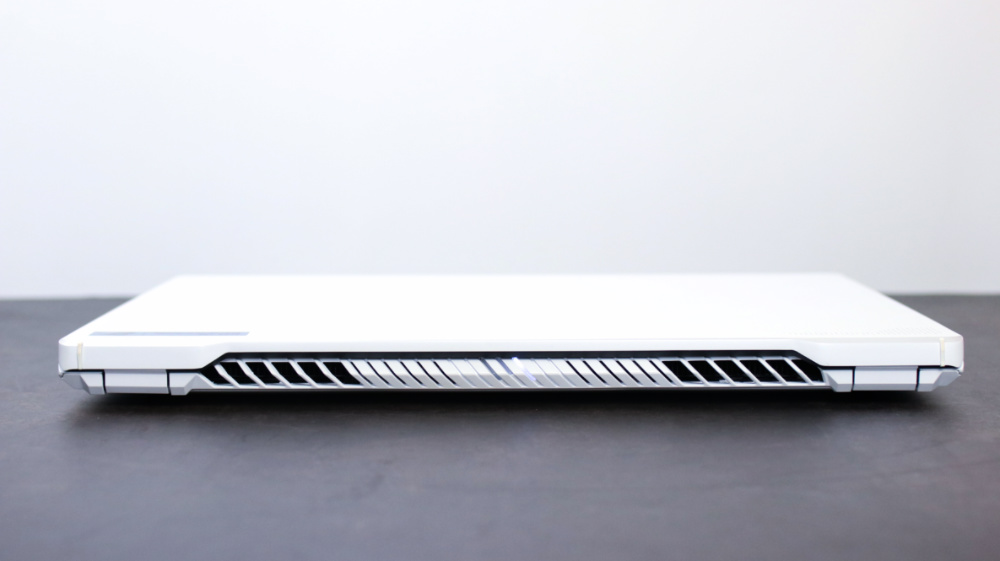 At the back, we have more vents. 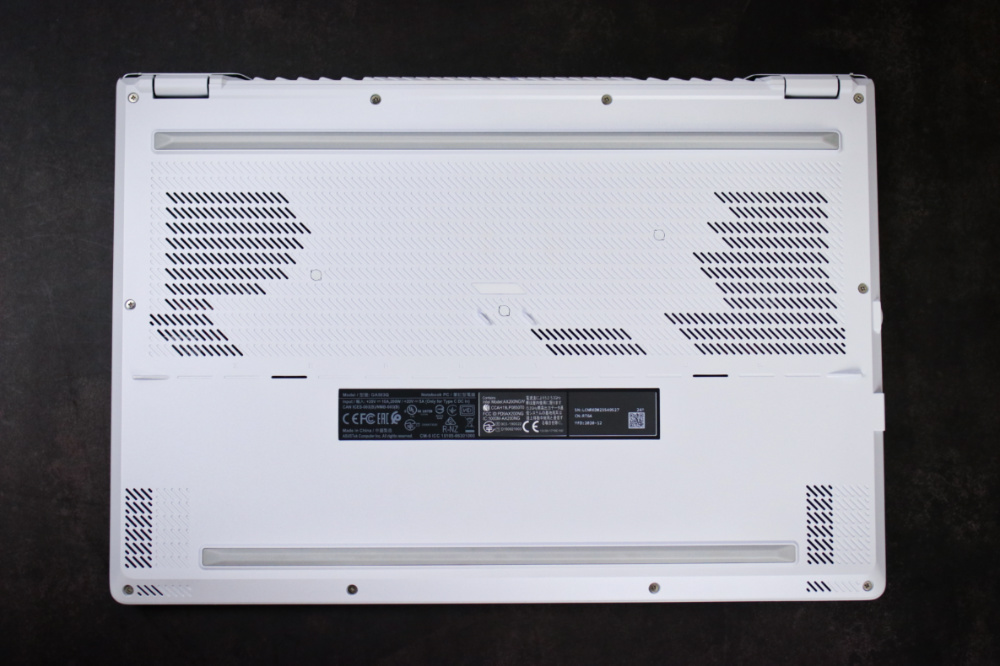 Flip it over and you’ll see the vents and rubber feet, and dual force-canceling woofers. 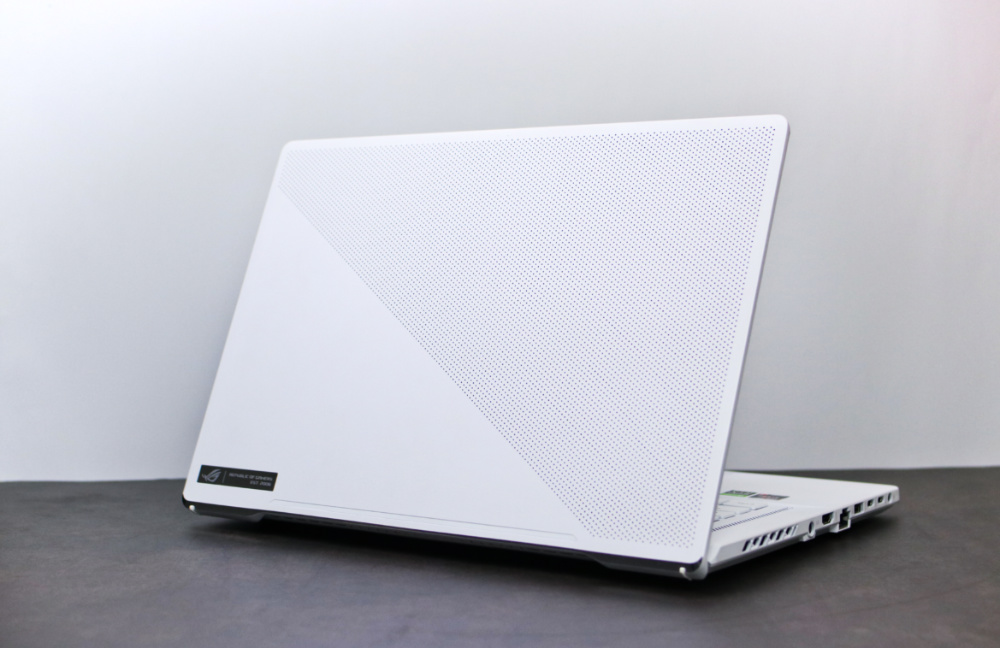 The Zephyrus G15 is pretty chunky at 19.9mm but the flat sides of the chassis make it look and feel sleek and clean. It’s hefty though at 2.1kg and not counting the charging brick. But we don’t mind. It’s a gaming laptop after all.

The Zephyrus G15 packs a 15-inch IPS screen with WQHD resolution, a smooth 165Hz refresh rate, and a fast 3ms panel, Adaptive-Sync, and 100% DCI-P3 color. Add to that the slim bezel and you got yourself a sharp, immersive screen with accurate colors and wide viewing angles. The 3ms response time helps minimize motion blur while Adaptive-Sync eliminates visual tearing and minimizes stuttering while gaming. You also don’t have to worry about display tilt, as you can angle it up to 180-degrees. 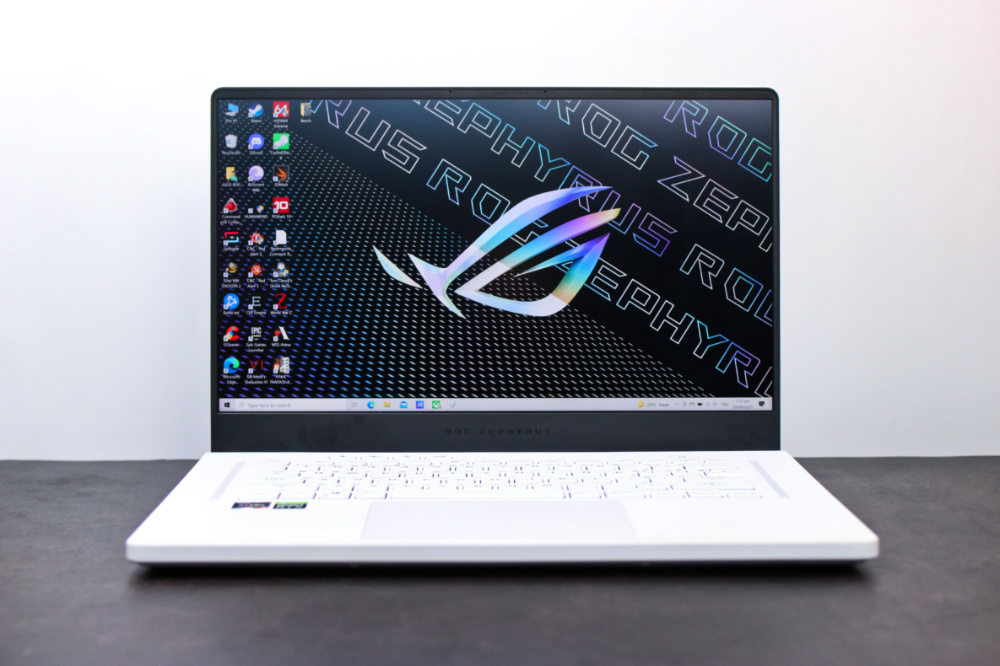 It’s a great display for almost every task, which includes office work, gaming, and casual entertainment like watching videos. You can further tweak the display by launching Armoury Crate and choose a color profile under GameVisual. 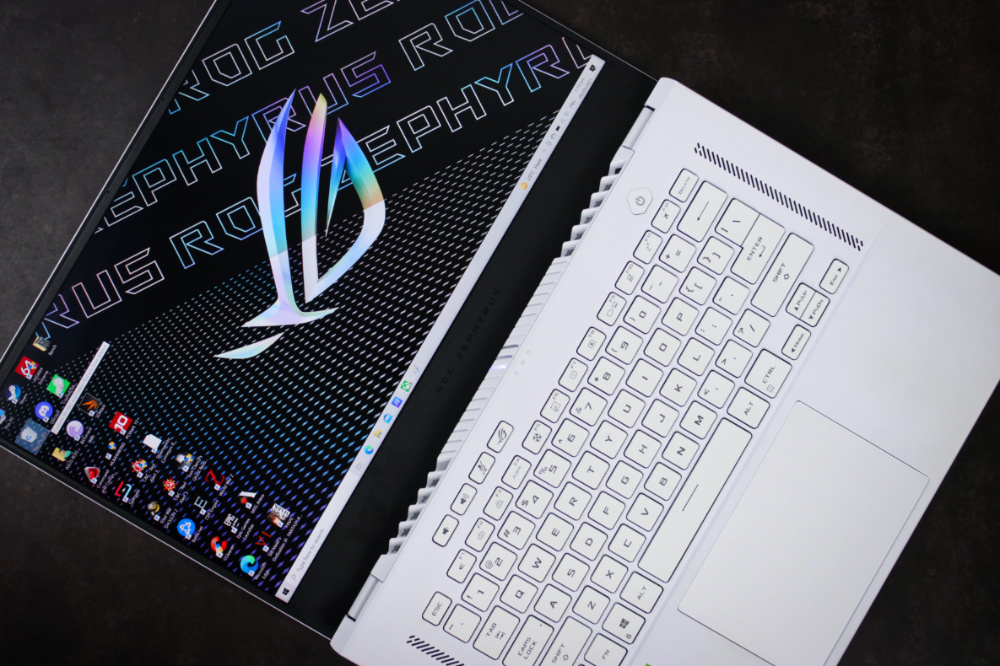 When it comes to audio, the speakers are loud, crisp, and have great separation. The bass is not as powerful as we’d like, which is understandable considering that these are laptop speakers, but they sound good enough for gaming, attending zoom calls, and streaming audio. Should you require better audio quality, you can use the ROG Delta gaming headset included in the package or connect it to a good pair of speakers.

The ROG Zephyrus G15 runs on Windows 10 Home and comes with Microsoft Office Student 2019. A staple in ROG laptops is the Armoury Crate, so if you’ve used a ROG laptop before, the interface is just the same but with some additional controls depending on the laptop’s features. Here you can see the Zephyrus G15’s stats, including CPU and GPU frequency and usage, temperature, RAM and storage consumption, and CPU and GPU fan speeds. 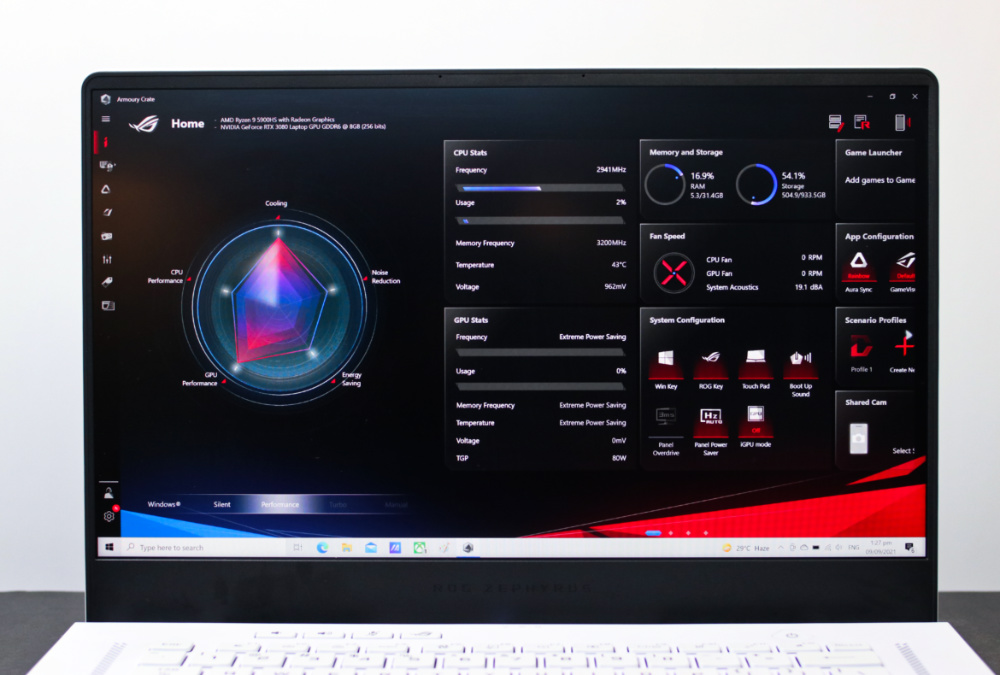 Performance modes are also available here, allowing you to switch to the standard Windows profiles or select between Silent, Performance, Turbo, and Manual. If you want to tweak your lighting effects and supported peripherals, there’s AURA Sync. There’s GameVisual as well, so you can select the appropriate display tweak based on your usage. You can even color calibrate the display from here. 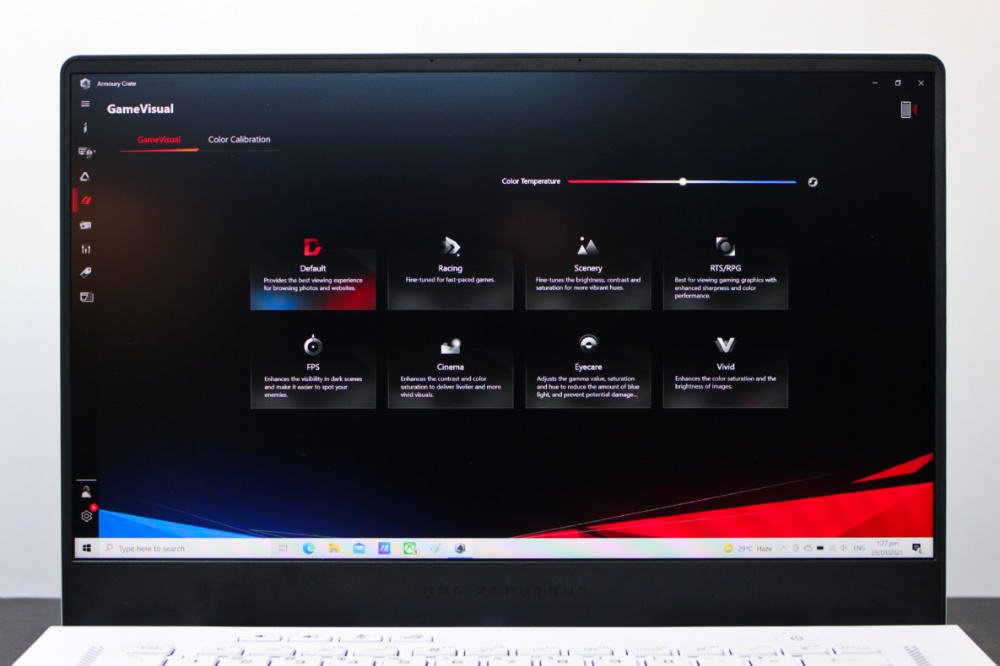 Dive further inside the Armoury Crate settings, and you’ll be able to free up memory, toggle iGPU mode to extend battery life, customize Multiwheel functions, further adjust lighting effects, and activate microphone modes as well as its two-way AI Noise Cancellation, which is handy if you need to take a Zoom call.

These are good scores but they’re lower than what we got from the Zephyrus S17 with an Intel Core i9-11900H CPU, NVIDIA GeForce RTX 3080 16GB GDDR6, 32GB of RAM, and 3TB of SSD, just in case you want to compare it to its more expensive cousin. 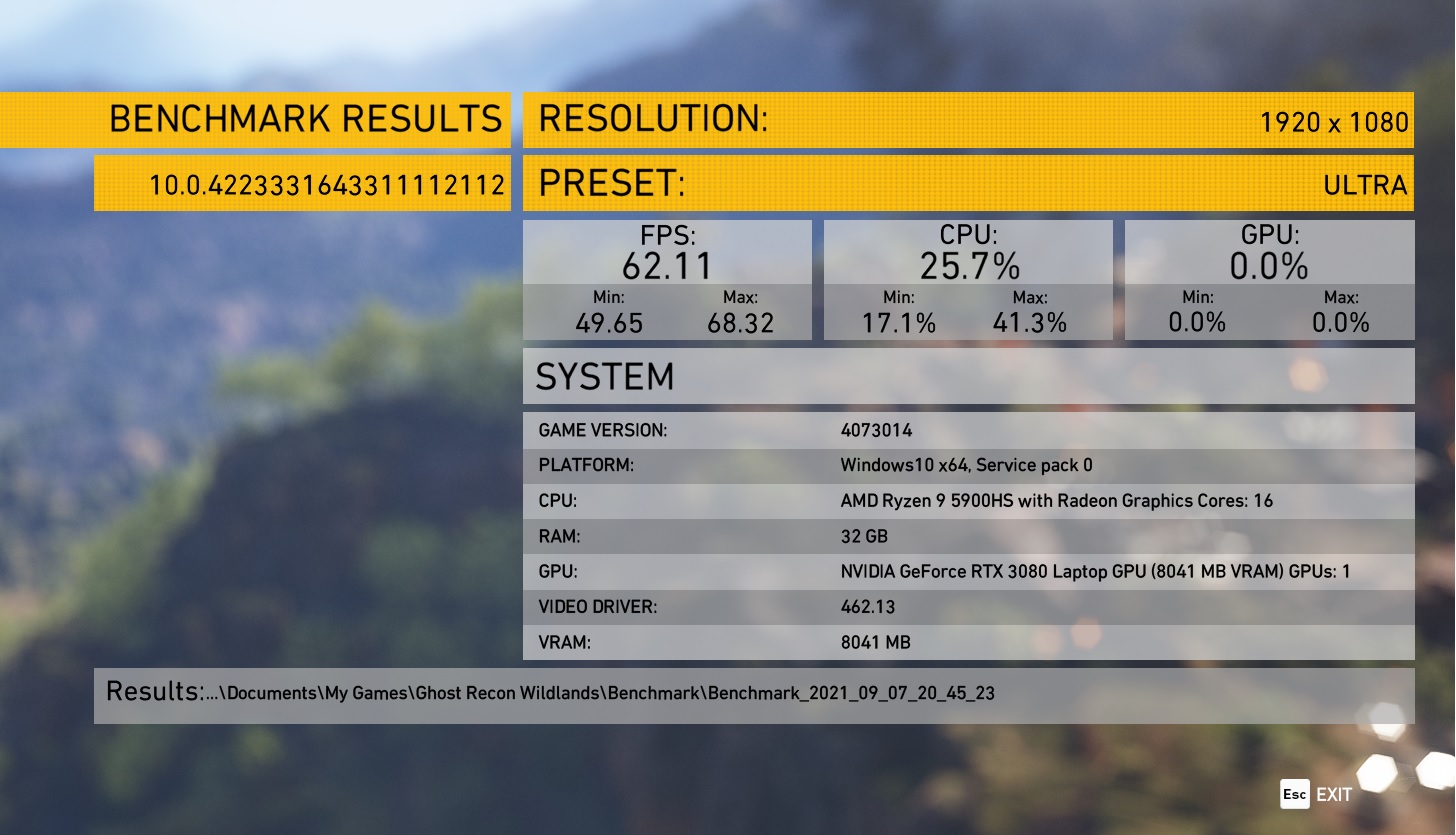 When running demanding titles, we saw it push 50.64 FPS on Ghost Recon: Wildlands at Ultra settings in QHD resolution. However, we got better frame rates at 62.11 FPS when we lowered the resolution to FHD. 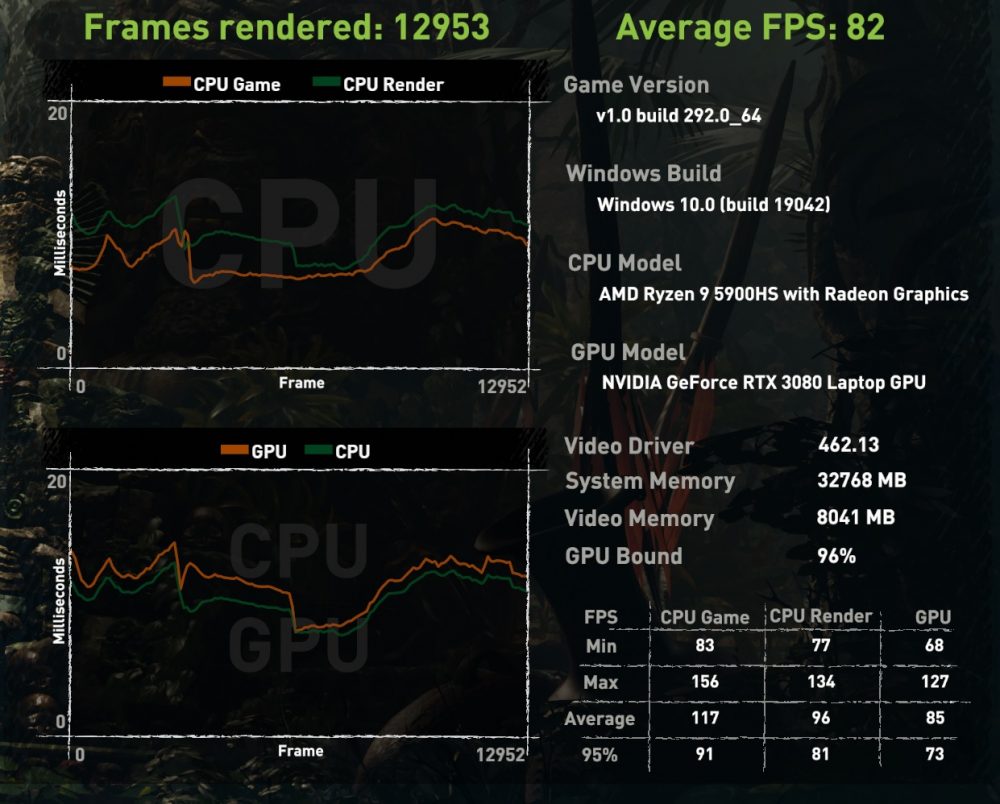 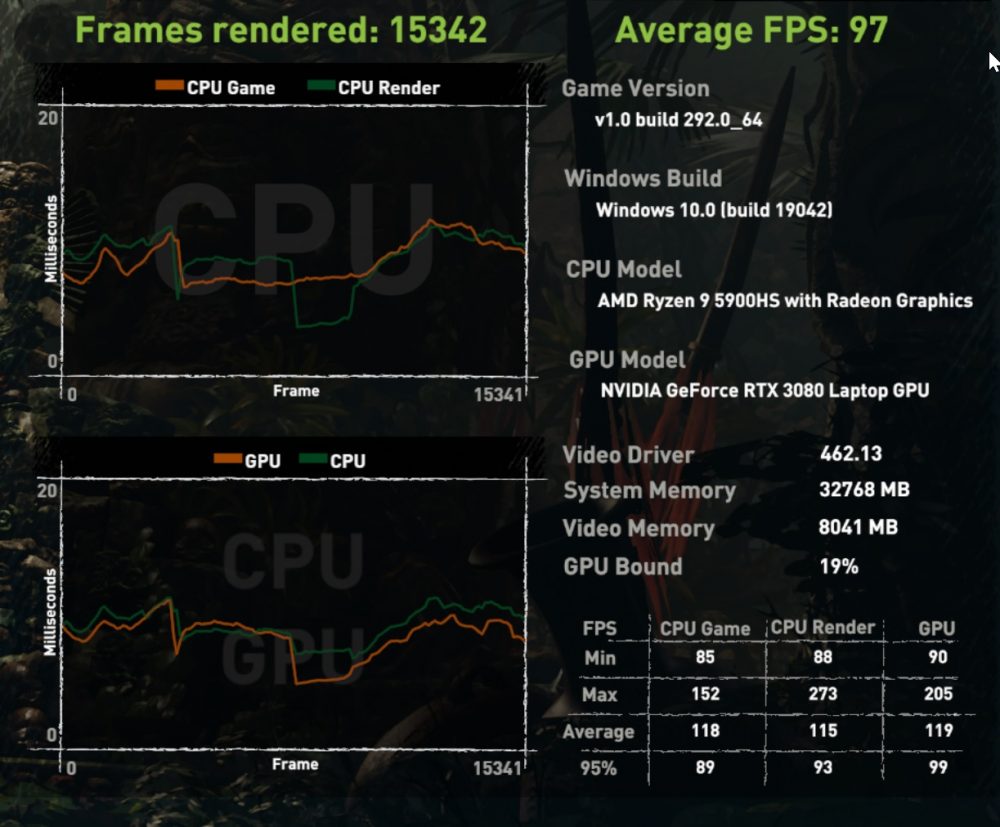 On Shadow of the Tomb Raider, we got 82 FPS in its highest settings in QHD and 97 FPS in FHD. 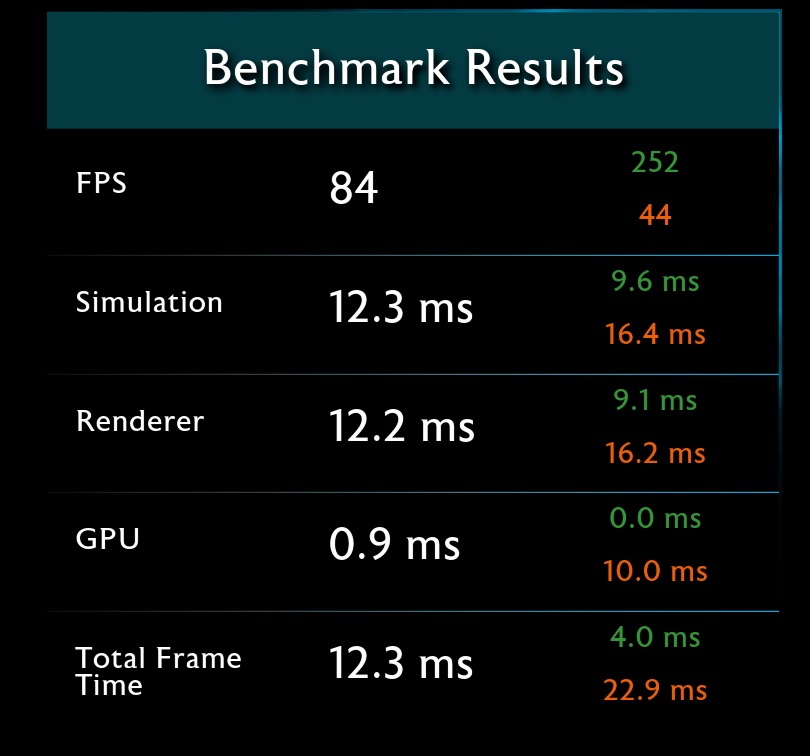 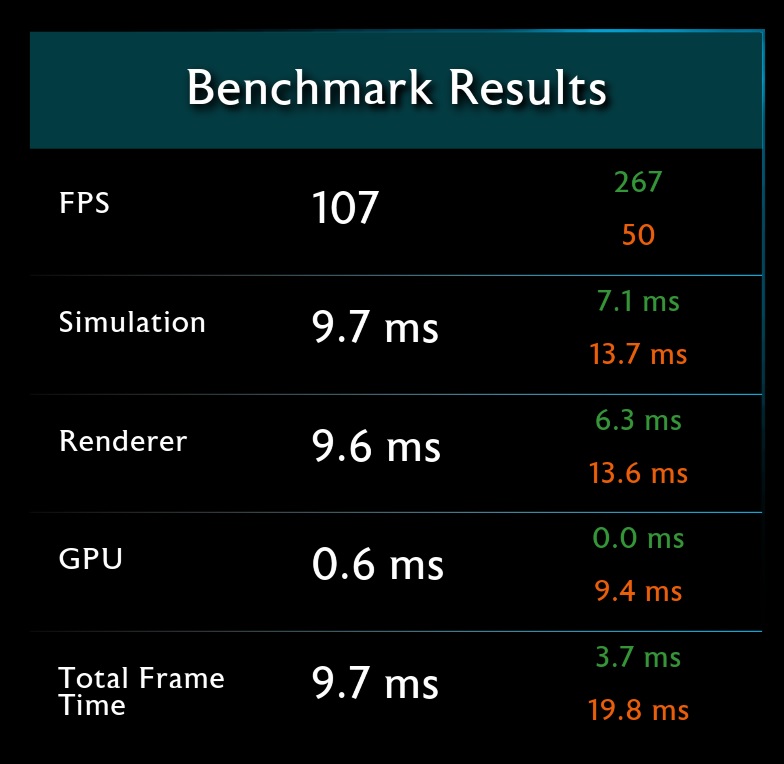 In Middle Earth: Shadow of Mordor, we got 84 FPS in Ultra settings in QHD resolution and 90 FPS in FHD. 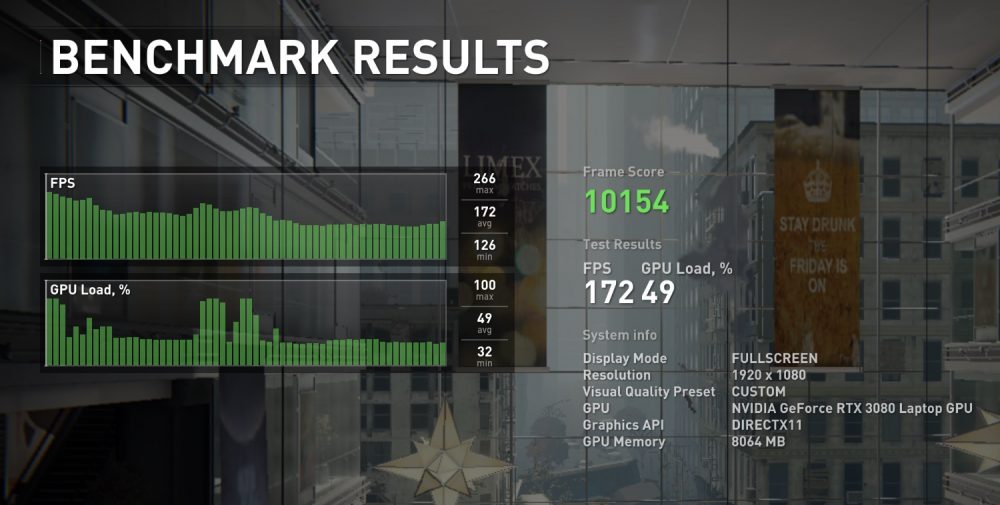 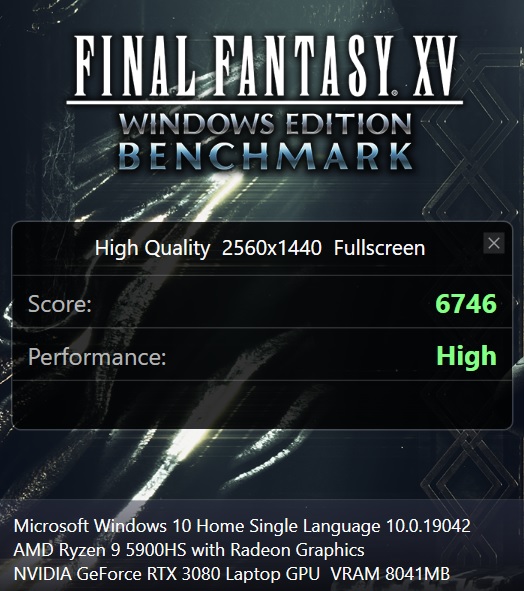 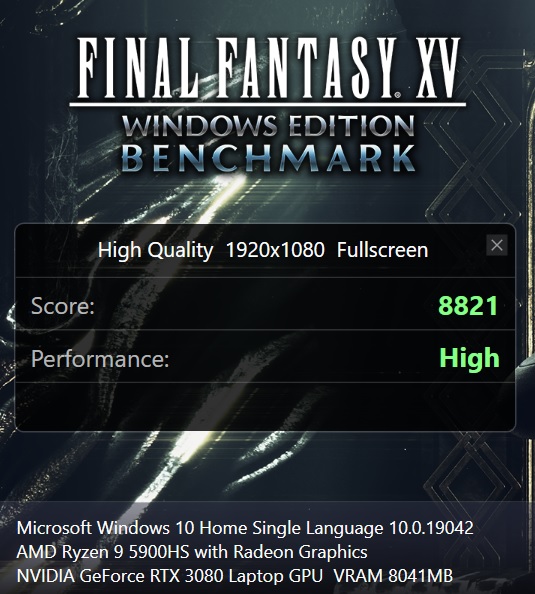 Based on the numbers above, you should be able to get around 60 FPS and above on demanding titles in full resolution on the Zephyrus G15, but if you don’t really need the resolution, you can tone it down to FHD and get more frames.

Thermal-wise, the Zephyrus G15 was able to keep things at comfortable levels. We didn’t notice any significant warming on the palm rest and WASD keys. Most of the heat is concentrated around the Escape key. The vents feature a weird design though, as the hot air is expelled towards the screen. We’re not sure if it’s bad for the screen, but so far we’re not experiencing any issues.

When it comes to wireless connectivity it has WiFi 6 and Bluetooth 5.1 dual-band. Powering it is a 90Wh battery that got us over 7 hours of video playback in better battery mode, better than what we got from the Zephyrus S17 that has the same capacity. For charging, the Zephyrus G15 comes with a 200W charging brick and a 100W USB-C charger.

We’re liking almost everything about the Zephyrus G15. It’s got a beautiful design, has a premium build, great display and performance, large RAM and storage, and good battery life. The lack of a built-in webcam can be a minor issue, especially to those who are into video calls a lot, but the external webcam kinda makes it up for it. The lack of RGB might be a minor downer for some, but not a deal-breaker. 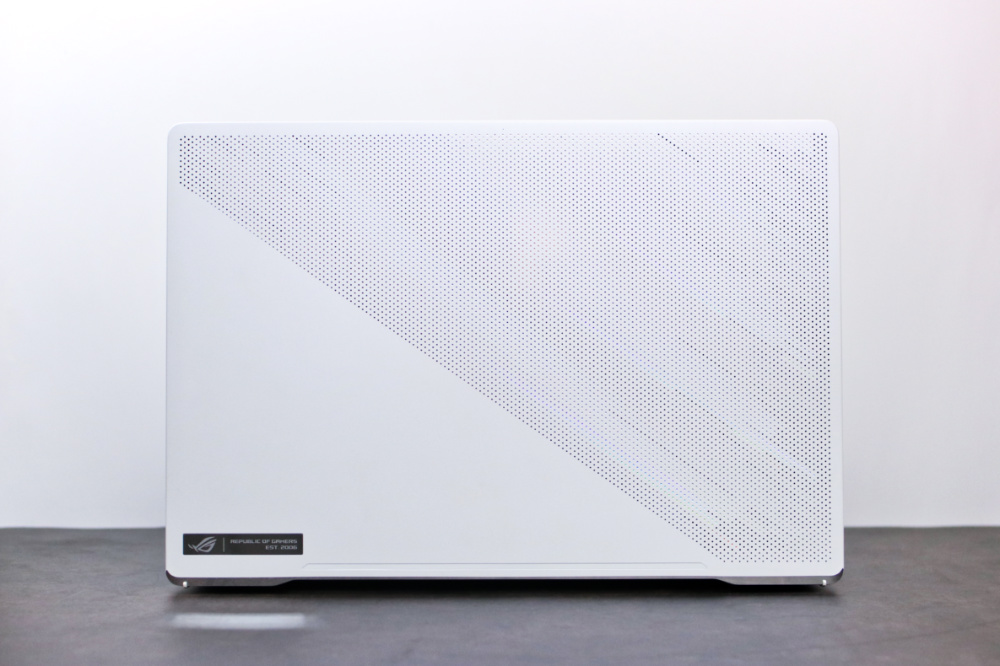